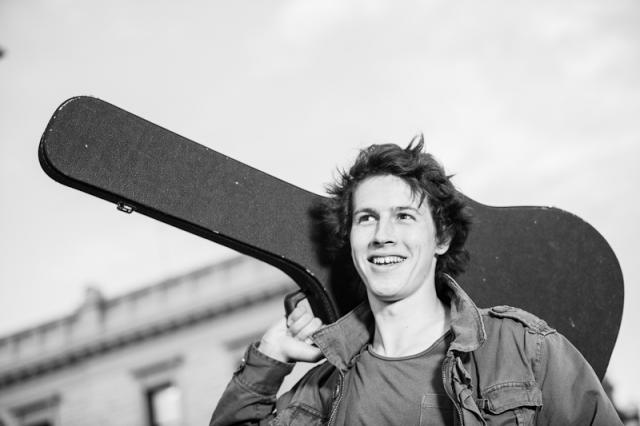 Thursday night, with the weather outside bleak and wintery and with drizzle pattering on the tin roof, Perth singer-songwriter Riley Pearce played an intimate show at the Blinco Street Café, the first of a series of shows across Perth with visiting Sydney muso Dylan Wright.

In hindsight I don’t think I could have picked a nicer way to spend a wet and cold winters night; it’s pretty hard to top, a warming cup of coffee, delicious wood-fired pizza and quality music. There was no constant chatter to contend with through earlier sets, the audience instead were attentive yet appreciative. Which may have been a bit disconcerting at times for those on stage. I certainly left wishing coffee shop gigs were more of a thing in this country.

Kicking things off was local musician Kat Wilson. Wilson was quick to point out that normally she was flanked by “three large dudes” or words to that effect, and was feeling vulnerable on stage alone. You wouldn’t have known it from her performance though. It was a set full of warm rich vocals, some beautiful guitar work with a bit of loop pedalry thrown in for good measure. Many of the songs were new, one only days or weeks old, though a few songs from last years EP Sea Legs made the cut.

Sydney’s Dylan Wright was next on stage, accompanied by percussionist Simon Ghali. Apparently having not played his own songs for about a month or so Wright suggested there would be a bit of rustiness and potential forgetting of lyrics to contend with; though in the end the only words he forgot were for a cover, and all is forgiven when you ”smoothly” transition into the Fresh Prince theme tune slow jammed. My only real complaint with Wright’s set was that it seemed too short, but he was definitely a charismatic and humble performer. Wright and Ghali were a fantastic pairing, and they certainly seemed to enjoy their time on stage. Most of the time the only indication Wright might have stuffed up a lyric, or chord change was a wry smile from Ghali. All in all it was a very enjoyable set, Miley Cyrus cover included.

Finally came Riley Pearce’s turn on stage. It’s been maybe just over a year since I first saw Pearce open for Tim Chaisson, and it’s interesting to see how much he has grown as a performer, and songwriter in that time. For a start he seems much more confident on stage; more willing to talk more with the audience; and adding a few new elements to his set; not to mention new songs – thankfully we are getting closer to a release date for that new EP. I’ve probably said it before in a review, but that trip to America has definitely paid off.

It was largely a quiet kind of set, not exactly upbeat, but fitted the evening’s mood perfectly. Pearce certainly seemed to be using the set as the perfect excuse to play a number of his new songs, some like “Swoon” only recently written, and a few such as “Outside the Lines” that will be on his forthcoming EP. There were also a few covers dropped into the set for good measure, a sublime rendition of Gregory Alan Isakov’s “If I go, I’m Going” and Angus Stone’s “River Love” the latter with Kat Wilson accompanying on guitar and harmonies. They may have messed up the fast part in the middle, but I don’t think anyone in the audience cared too much.

All in all it was a fantastic performance, plus it was interesting to hear “Roskie” performed solo. A solo acoustic rendition of the song certainly changed the meaning of the song for me; or maybe made it that little bit clearer to me. And it’s always a pleasure to hear “Bryanna” played live. Pearce has fast become one of my favourite songwriters from Perth, and the probably the rest of the country. Shows like these just heighten my anticipation for that new EP.