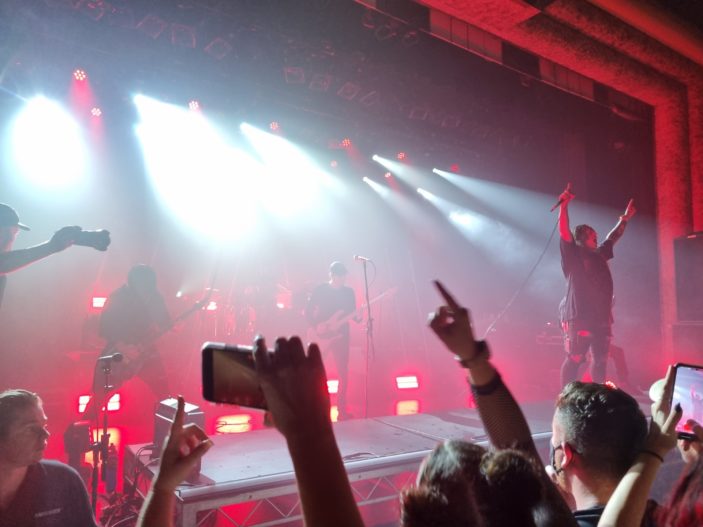 Sydney metalcore legends Polaris have quickly established themselves as one of the most revered heavy bands in Australia. Known for their explosive live performances and dedication to their craft, the quintet has been dying to bring their sophomore record The Death of Me – released 21 February 2020 – to stages across the country since the global pandemic hit.

On Wednesday 23 February – a long two years on – Polaris finally brought their awaited Summer Aus Tour to The Tivoli in Brisbane, supported by Alpha Wolf, Justice for the Damned and Mirrors. The sold-out show that kicked off the tour was the first of three consecutive nights in Brisbane due to high demand and the boys definitely did not disappoint.

Gippsland prog-metal quartet Mirrors launched into their set soon after the doors opened and already had people rushing in. Playing a range of tracks from their debut album The Ego’s Weight – released 19 November 2021 – and old favourites, many were bustling to catch them live for the first time. Harsh screams and ethereal cleans permeated intricate riffs and djent chugs, while the complex drums and busy bass were mesmerising. Before long, there were circle pits with punters picking up their fallen companions and returning lost phones, keys and glasses to their owners between songs.

Next up, Sydney deathcore quintet Justice for the Damned took to the stage with a gloomy aesthetic but you knew they came to have fun. Dirty lows bolstered by scratchy guitars and chaotic drums immediately opened up the middle of the room. From blast beats to sludgy breakdowns, they had the floor undulating with eager punters from all sides. The band had a lively stage presence, vehemently two-stepping across the stage and throwing horns in the air to those on the balcony. Frontman Bobak Raffiee frequently checked in with the crowd, including someone who went down in the mosh, and commemorated the local heavy scene.

Melbourne metalcore outfit Alpha Wolf – who replaced Make Them Suffer on the tour due to strict WA border restrictions – emerged from a thick fog to an ambient soundscape. The eerie opening was spearheaded by soul-rattling riffs and, of course, they already had a wall of death going in their first song. Deep growls, wailing guitars and chaotic drums had heads banging as charismatic frontman Lochie Keogh repeatedly expressed the band’s gratitude to Polaris for inviting them along for the ride. Enigmatic guitarist Sabian Lynch captivated and everyone – and I mean everyone – bounced for fan-favourite ‘Akudama’ to close the set.

When the lights went down for Polaris to begin, the energy of the room was palpable. The crowd cheered and pushed closer as the picked melody of album opener ‘Pray for Rain’ rang out, shouting back every word when the verse kicked in. Surprisingly, the band followed up the ominous intro with deep singalong ‘Crooked Path’ from their debut album The Mortal Coil, which went down well with the fans in the front. Soaring highs and desperate screams melded with technical guitar work and frenetic drums, demonstrating why they have earned such an esteemed international status as one of the best live heavy acts.

Throughout the night, Polaris played The Death of Me in its entirety – save for extended closer ‘The Descent’ – including favourites ‘Masochist’ and ‘Vagabond’. Frontman Jamie Hails took a moment to explain that he had been anxious about the tour but that live shows are his safe space, then encouraged fans to let loose for fervent banger ‘Landmine’. Circle pits opened up and merged then crowd surfers headed for the front, with people picking each other up along the way. The band returned for an encore with a live premiere of ‘Martyr (Waves)’ and grand finale in ‘The Remedy’ to see their northern family off.

There is nothing like the community spirit of a heavy show. Sure, you might cop a few elbows to the ribs and have beer spilled all over you, but those same people will get you back on your feet if you go down. Polaris have built a loyal fanbase from empathetic pain and shared sorrow, and bringing The Death of Me to the stage has invaluably strengthened that connection. The boys will be hitting The Tivoli again on Thursday 24 and Friday 25 February with Alpha Wolf, Justice for the Damned and Mirrors before continuing their national tour.