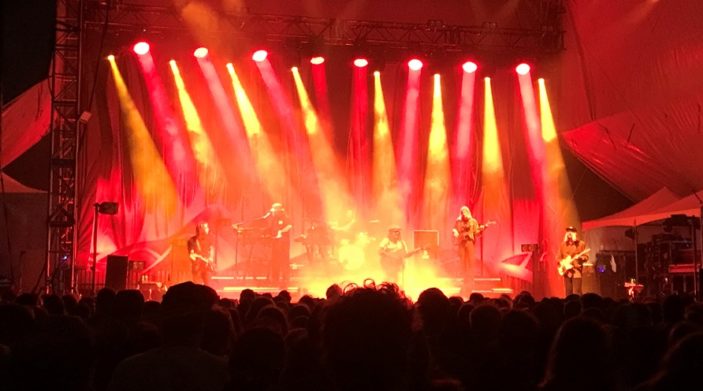 When this scribe mentioned in passing to his sister that he was going to see Ocean Alley, she replied “all their songs sound the same”. To those familiar with the Northern Beaches six-piece that’s not quite true, but it is one challenge with their live shows.

Yes, they have some absolute hits which are guaranteed to get any music-loving crowd excited, but their unique psychedelic-surf rock sound can merge into something less distinguishable, particularly without any concerted engagement around that.

The handful of delays caused by COVID and border restrictions meant Ocean Alley ran the gauntlet with a late May gig at an outdoor venue, and they largely got lucky with only a brief spot of rain and some gusty winds on a cooler-than-usual Fremantle evening.

Overlooked by a giant banner adorned with the band name in vertically stretched typeface flapping in the Freo wind, Ocean Alley arrived on stage and launched immediately into ‘Tombstone’ prompting a frenzy of phones out filming, as is the modern way.

After following up with ‘Way Down’, lead Baden Donegal, sporting his trademark cap, commented they were relieved to have avoided the rain of the past few weeks – ironically amid the heaviest downpour of the night, although few scampered for respite such was the anticipation.

Girls emerged on shoulders as Ocean Alley moved into popular 2013 track ‘Yellow Mellow’, before ‘Lonely Diamond’, the title track for their 2020 LP, slowed the tempo. 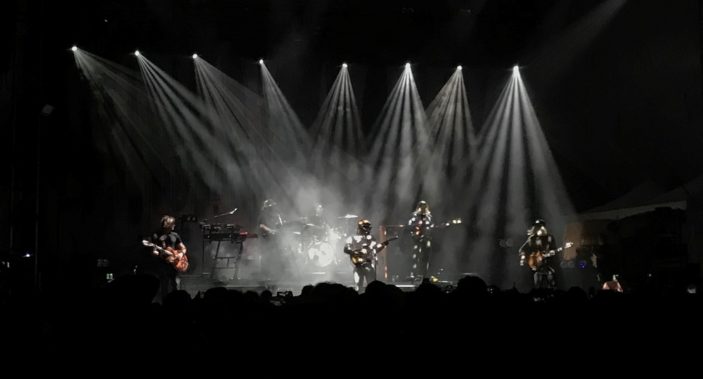 One of Ocean Alley’s challenges is Donegal is a man of few words, and that can diminish their ability to engage their audience and build a narrative or connection beyond their music. Indeed, after the excitement of the early hits the show meandered along, with many retreating for the growing alcohol queues.

But that shouldn’t detract from their impeccable ability to recreate their album sound which is a delight for the ardent fans.

Their popular Triple J Like A Version trio cover of Pink Floyd’s ‘Breathe/Comfortably Numb/Money’ was faultless particularly their transitions.

Lead guitarist Angus Goodwin‘s riffs on ‘Partner In Crime’ from 2016 album Lost Tropics were a highlight, while Donegal’s vocals were unflappable even when he launched himself among the crowd late in the set.

The energy was palpable again as Ocean Alley closed out the set with 2018 Triple J Hottest 100 winner ‘Confidence’ and ‘Happy Sad’, with Donegal encouraging the crowd to clap along in a rare show of engagement.

The encore came with Ocean Alley’s soulful cover of 1970 hit ‘Baby Come Back’ by Player (which they also played on Triple J’s Like A Version, but back in 2018) and closed out with Tom O’Brien’s drums generating slow-building vitality on ‘Knees’.

As always closing out on a few hits was a winner with the crowd, but the show was mildly let down by a lack of connection or narrative. In saying that, you cannot fault the six-piece’s faultless musicianship which was a pleasure to witness.