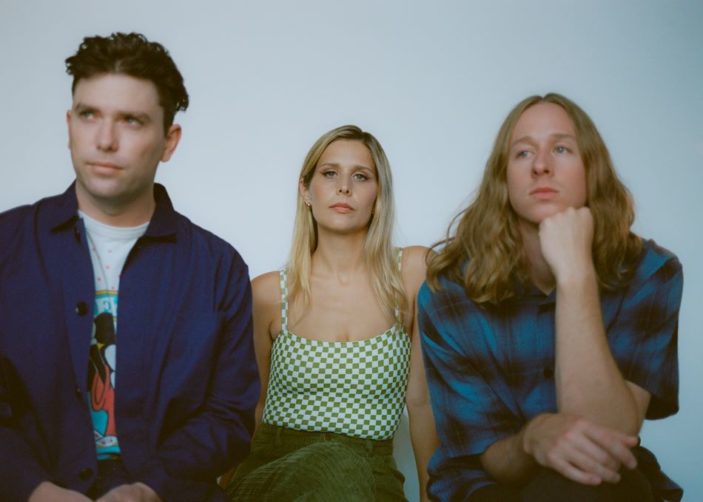 Returning to play a hometown show for the first time since releasing their stellar second album, Middle Kids brought more than their A-game to Sydney’s City Recital Hall as they tore through a career-spanning set and set a new high standard for what you should expect from the band.

Opening up the night was The Lazy Eyes, a four-piece psych-rock band from Sydney. If you’re not aware of what The Lazy Eyes are doing, think of something somewhere between the psych-rock sounds of King Gizzard and a more spaced out Babe Rainbow, bordering on early Tame Impala. Playing a short and sharp 30-minute set, it was clear the band were stoked to be in such a large room, as they took full advantage of the stage and were more than happy to be playful and have fun while on it. With the bulk of their set coming from their 2020 EP (“Tangerine” was a highlight) and newer singles including the sprawling and purely chaotic “Where’s My Brain?”, The Lazy Eyes did their job of warming up the crowd while not overplaying their hand too much.

With their style of music, Middle Kids are the type of band the City Recital Hall was built for. Acknowledging themselves that the quality of the venue was next level, Middle Kids knew they had to be on their best to deliver for the crowd, and my lord, did they do so. Opening up with “Cellophane (Brain)” from March’s Today We’re The Greatest, from the get-go the band hit their straps. While being a single from the album, I wouldn’t describe “Cellophane” as an obvious hit, but when you bring in vocals as exemplary as Hannah Joy‘s, this song and all others that followed increased their quality in a live setting by ten-fold. Moving swiftly into “Real Thing”, the night was off to a subtle but safe start, before opening up and kickstarting with “Never Start”, the first real upbeat track of the set. Encouraging the crowd to be liberated from their sets, “Never Start” was the three minutes needed to really get the crowd involved and the night out of first gear.

Noting that they’d only recently released their new album, the band next moved into a new sentimental favourite in “Stacking Chairs”, a song about supporting your partner in even the worst of times; something that’s always especially present for Middle Kids. Followed up by “Bought It”, the closing minute of the song was the crowning moment from the first quarter of the set, as the complete musicianship and songwriting of the band really begun to shine through.

Having followed the band since their earliest days, it’s been great as a fan to see their on-stage persona and banter naturally progress and become more fluent and interactive with the crowd. From Tim Fitz taking the chance to hang shit on new guitarist Miles Elkington‘s rabid energy, to drummer Harry Day getting confused about what city they were playing in when talking about new track “Summer Hill”, or Hannah talking about parenthood and how their track “Mistake” (an absolute masterpiece on its own and masterstroke as a main set closer) is not about parenthood, there is a sense of familiarity and comfort beaming from the band when they play shows now.

While this tour is evidently an opportunity to show off their newest tracks, including the overly sad “Lost in Los Angeles”, the reflective “Some People Stay in our Hearts Forever”, the riotous “RU4Me” and horn section featured “Questions” or the album and tour titular “Today We’re The Greatest”, the night belonged to those tracks the crowd already knew, loved and could get down to. The punk-nearing vibes of “On My Knees” hit the spot, while a solo and piano-led version of “Salt Eyes” helped break the flow of the set ever so slightly.

Despite releasing two truly complete albums and a couple just as complete EPs/ mini-albums, the heart and soul of Middle Kids lies with “Edge of Town”. Without big-noting it at all, the energy and atmosphere built in the room off just one song was ridiculous and only rammed home the fact that Hannah has incredible vocals and is an absolute rockstar. Closing out the night with “Golden Star” and “Big Softy” (with the band joking they were about to release a line of brie cheeses inspired by the song), everything came to a head with closer and the bulletproof sentiment laden “Don’t Be Hiding”. Breaking it down to be near acapella with just Hannah on guitar, those closing three minutes were a sight to behold and hear and only continued to build on the community that had been developed in the City Recital Hall over those previous 80 minutes.

Middle Kids are evidently a band that despite not having played a heap of shows over the past 18 months, can and will crush a live set each and every time. Playing the first of two hometown shows on the tour, if you get a chance to head along to any future Middle Kids show, do whatever you can to source a ticket. You will never be let down.