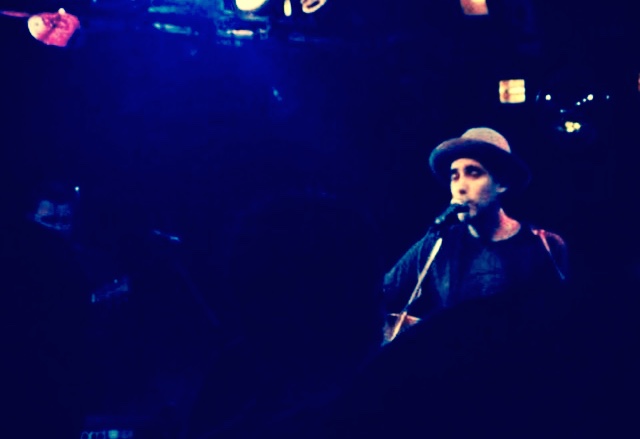 Sunday evening saw Joshua Radin kick off his Australian tour with an intimate gig at Perth’s Rosemount Hotel. It might have been a Sunday night and it might have been father’s day but that didn’t stop a sizeable crowd come out for Radin’s first ever gig in Perth; “the chillest place on earth” apparently.

Opening things up was local singer-songwriter David Lazarus; freshly returned from writing songs in Greece. A confident performer Lazarus quickly got the audience on side, and by midway through his set had many of them clapping along. It was pretty clear that Lazarus has a penchant for writing love songs; and many of his songs have a nice rootsy pop sensibility – think Jack Johnson esque. Though the set was largely made up of his own material, he did drop in a fantastic cover of Whitney Houston’s “I Wanna Dance With Somebody” and slotted in a mash-up near the end of the set; featuring a whole heap of songs, too many to name.

Joshua Radin first came to my attention way back in 2006 when I bought his debut album on iTunes; I’m slightly disappointed to say that he dropped off my radar in the intervening years, but after this gig I’m right back on board. It might not have been a sell out crowd, and it might not have been the longest set I’ve seen, but it was definitely one of the best. Radin is an accomplished performer and a charismatic, soulful and honest presence on stage. The show might not have gone off without a hitch, we did have an evacuation alarm go off, and continue to go off mid song at one point; but if anything that just made the show that bit more memorable.

The opening combo of “No Envy No Fear” and “Brand New Day” was near sublime, with Radin’s hushed delivery reducing the audience to silence. It was quite a varied setlist, with Radin letting new songs from the record Onward and Sideways nestle amongst songs from his other albums. We were also treated to an as yet unheard song, tentatively titled “Waiting” an utterly beautiful song born out of a summer spent in rainy Stockholm. It was largely a bit of a contemplative and relaxed set, though Radin did through a few more upbeat numbers like “Underwater” in near the end which got the audience clapping along.

There were no shortage highlights throughout the set, but one of the things I really enjoyed about the whole performance, was Radin’s willingness to chat to the audience between songs, even just to make sure the fire alarm didn’t go off again. His stories were often funny, as was his self deprecating banter, but the stories also gave a lot of those songs context or just gave that little extra glimpse into his songwriting process. And the audience were rapt, he’d been promised that a Perth audience would be appreciative, and they certainly didn’t disappoint; they were attentive and roudy when required.

Throughout the set Radin was accompanied at different points by Brandon Walters on Guitar, Keyboards & Lap Steel and Chris Farney on drums. The interplay between these three musicians was just wonderful; Walters’ guitar playing added a lovely dimension to the songs, and that lap steel was just beautiful. It was all just nicely balanced from Farney’s drumming to the guitar work; and lovely harmonies from all three too. The show ended with Radin, Walters and Farney fully acoustic and acapella amongst the crowd; that’s something you don’t get at every show, either as an audience member or a performer. This may have been Radin’s first visit to Perth; chances are after this show it won’t be his last.