Live Review: Grow Your Own 2019 was a midsummer’s daydream festival experience

Now in its third year, Grow Your Own Festival takes place on the North Coast of NSW in the Forster-Tuncurry area. Started in 2016 by local Holly Rankin, aka Jack River, the original motivation of the event was to bring more music to the region for the youth of the area. It has since grown into a showcase of domestic bands and artists as well as local growers and producers who encourage environmental sustainability. With an increase in attendees from 3,000 to 5,000 for the 2019 event, this years Grow Your Own boasted an impressive lineup that featured DMA’s, Hockey Dad, The Preatures, Jack River, Mallrat, Goons of Doom, Totty, Mild West, Mini Skirt, Belle Badi and Grace Turner. Not only did this wealth of local talent shine, but the ethos, aesthetic and organisation successfully created a refreshingly charming, joyful, calm and smooth festival experience.

Aside from the string of great Summer anthems that played on the stage all day, another of GYO’s brilliant successes was the organisation of the day. In an effort to increase ease in getting to and from the festival site and reduce car traffic, noise and emissions, Grow Your Own organised 14 bus locations in the surrounding areas that had frequent pick-up and drop-off times running all day for $15 return. At the end of the festival, bus lines were still running smoothly and quickly. Although long, the lines for drinks at the bar, even at the peak of night between headline sets, flowed quickly with a maximum wait time of 8 minutes throughout the day as two queues lead to around 20 registers that accepted both cash and card. 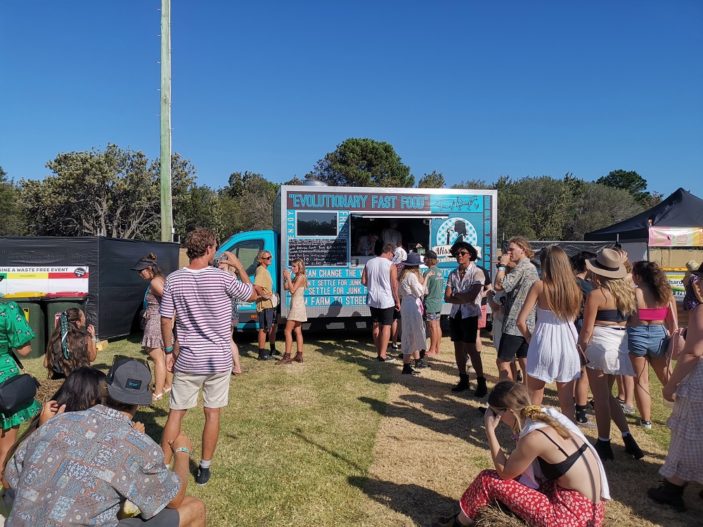 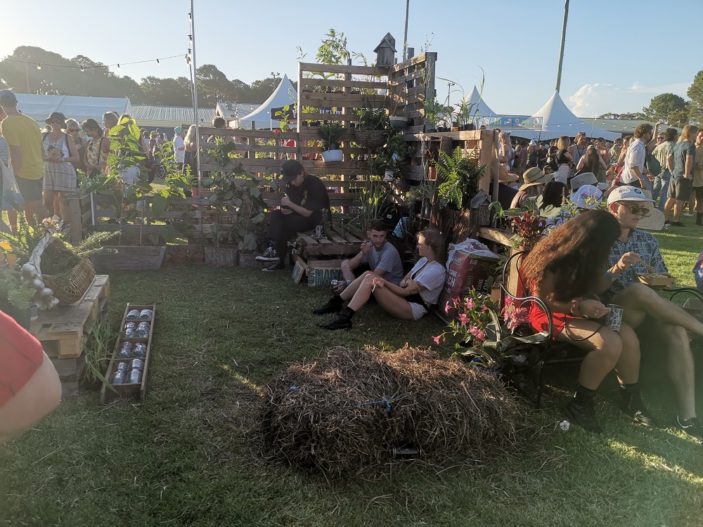 There were plenty of spots to sit around the festival site with hay bales and numerous “art bars” decorated by the likes of Kentaro Yoshida, Jack Irvine and Ben Brown, to name a few, scattered around Harry Elliot Oval. As the festival grows and becomes an anticipated date in the Australian festival calendar, it could benefit from hosting more food trucks as only two were present this year which resulted in lines that stretched nearly the width of the festival site and had a wait time of close to 40 minutes. 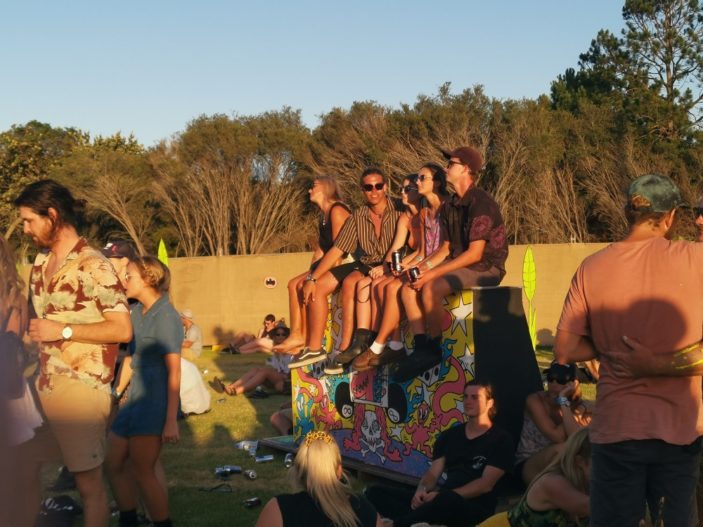 A Grower’s Area was placed in the middle of Harry Elliot Oval and offered patrons the chance to eat and drink locally-sourced products. From kombucha cocktails to wines matched with cheese platters to lessons in sourdough making and a pop-up cinema, GYO promoted how the local foodie movement is to not only be fresh, but environmentally sustainable. 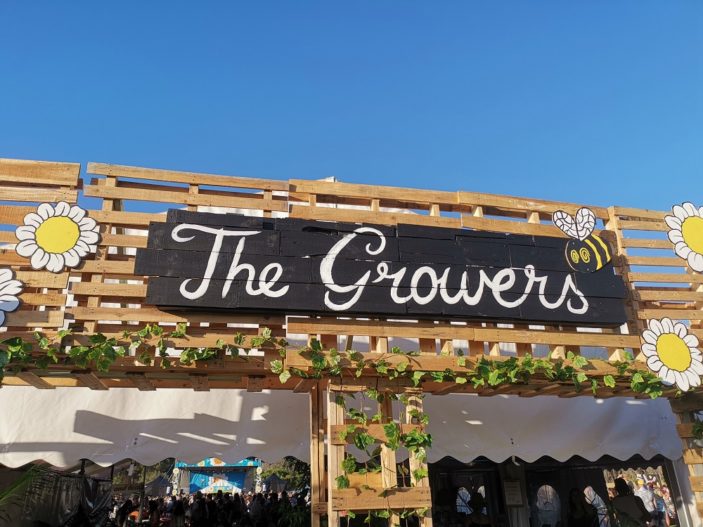 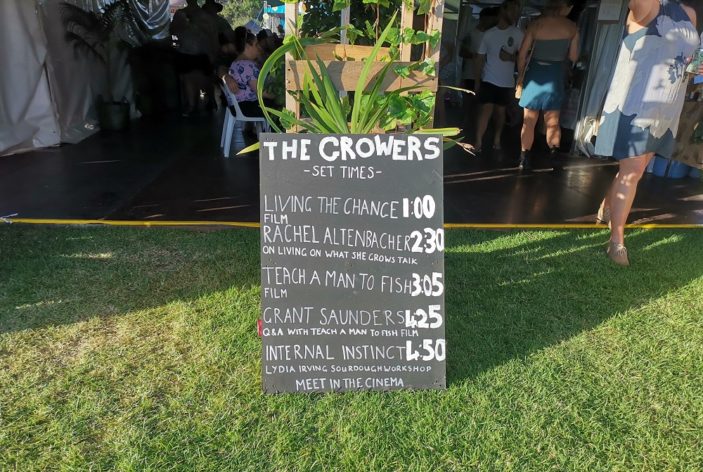 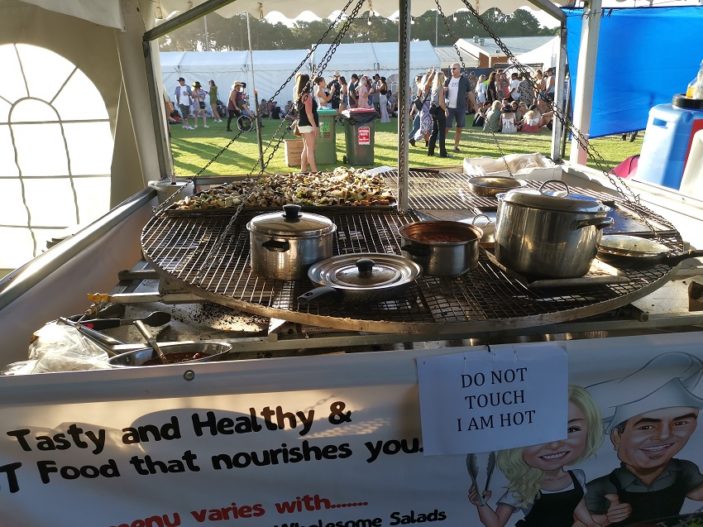 triple j Unearthed winner Grace Turner opened the day with her confessional and raw ballads that dance between indie rock and folk confessionals. Her latest single “Easy I Fall” was a set highlight that saw Turner opening by strumming her electric guitar solo before the rest of her band tumbles in for a hypnotic and gritty chorus. Newcastle’s Belle Badi combined the colour of pop hooks with crooning that would quickly transition into rap-esque verses as she bounced behind her keyboard. Byron’s Mini Skirt had the crowd steadily flowing towards the stage and headbanging for the first time of the day. Their sound combines pub rock and punk and was a welcomed introduction of raw aggression. Three-piece Mild West relied heavily on their pulsing psychedelic soundscapes and with good reason; they’re captivating, impulsive and volatile yet as you sway and nod in unison with the audience, they’re also sensual and calming and the perfect soundtrack as the afternoon sun met the fresh breeze from the ocean beside the festival gates. Fresh from supporting the likes of Skeggs and Ruby Fields around the country, Totty powered through a loud and raucous set that featured the Summer soundtrack essentials “SIGH” and “RIFF”. 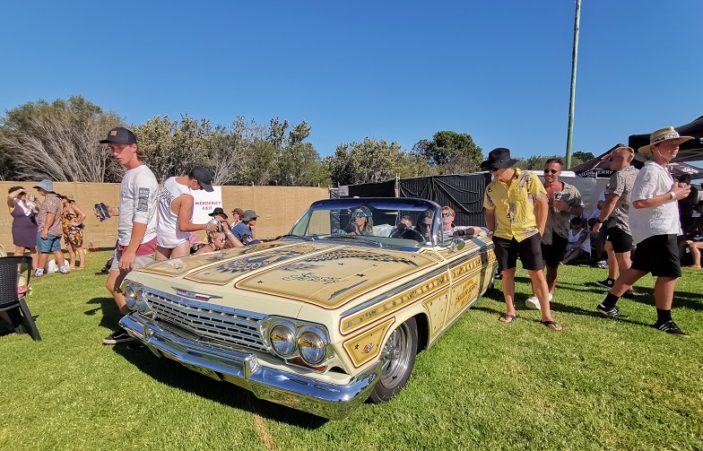 Narrabeen’s Goons of Doom were accompanied by two additional brass players and each member of the four-piece alternated singing duties. Their set was pure fun with infectious energy as they bounced between songs about sex, beer, fingering, burning people alive and Jamie’s Corner – “a surf spot just around the corner”. Their set also featured a cardboard shark that stretched the length of the stage, guitarists continuing to play as they crowd surfed and a brief cameo from Ben Reed of Skeggs who danced behind a cardboard cat mask. Mallrat was accompanied by a 3,000 strong band as the entire crowd  sung every word to “Groceries”, “Better”, “For Real” and “Uninvited”. There weren’t any moments of calm – it was energetic hit after hit. Grow Your Own festival director Jack River was noticeably elated to be on stage and see the dense crowd of GYO-loving patrons in front of her. Holly confessed, “It’s so emotional to see my hometown singing my songs back to me,” with a smile before later introducing “Fault Line” with, “I might have played this at three Grow Your Own’s in a row so let’s see how loud you can sing it.” “Fools Gold” and a cover of Tal Bachman’s “She’s So High” were undoubtedly the loudest singalongs of the day.

Isabella Manfredi of The Preatures strutted the widths of the stage and into the crowd for the duration of their uplifting set. Full of funk, punk and psychadelic injections, The Preatures swaggered through “Somebody’s Talking”, “Yanada” and 2014 hit “Is This How You Feel?” to the delight of the Forster-Tuncurry crowd who glowed in the golden light of the lowering sun. Dressed in a cowboy hat and aviators, Zach Stephenson of Hockey Dad had little to say to the crowd as the band slammed between hits “I Wanna Be Everybody”, “Sweet Release”, “Join The Club” and their triple j ‘Like A Version’ from the week before, Macy Gray’s “I Try” that already was a welcomed singalong. Having seen the band last September, the band appear to be experimenting with vocal delays more. Words echoed even after Zach moved away from the microphone and made the tracks somehow more anthematic and psychadelic. Mosh pits that lasted the entire duration of their set broke out and the quote of the day might belong to one mosher who escaped and stumbled to the side and could be heard saying, “I didn’t find my phone, but I found a phone” to a wave of laughter. DMA’s were tight, soulful and projected waves of serenity over the crowd thanks to Tommy O’Dell’s flawless vocals. The headline set comprised of “For Now”, “The End”, “Dawning” and crowd favorite “Delete”. Now that the band has been touring for a year with two albums of material to choose from, it was entertaining to see how the band flourished between 2016’s Hills End and 2018’s For Now. In a live setting, the three-piece expands to five members and their sound noticeably blooms with more colour and depth.

Grow Your Own 2019 was infused with the easy and care-free attitude of the NSW North Coast. It’s no easy mission to move, host and entertain 5,000 attendees but Holly Rankin and the Grow Your Own family were successful with their distinctly pure and wholesome festival experience.

Grow Your Own will return in 2020. For more information on this years event, artists and growers you can head HERE.