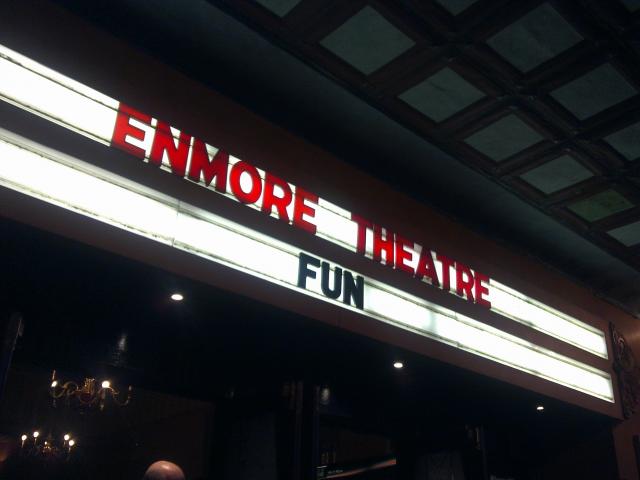 New Yorker’s Fun. have a lot to live up to just in their name alone. If you’re going to blatantly deem yourselves an adjective with a full stop you better deliver the goods. The lads were once again gracing Sydney as part of the Future Music Festival circuit, and after graduating from the Metro were now promoted to the Enmore Theatre.

Before we experience our headliners, Pluto Jonze was on to warm the crowd up. On initial hearing, they emit a little bit of a Brit-pop feel and remind me of that old school band Feeder. With a vocal style that errs on the higher side and lots of snippets of samples and hints of electronica, it comes across as a little busy and noisy but it works. Tracks like”Plastic Bag In A Hurricane” and his current single “Eject” have a bit of a David Bowie vibe as they cleverly mash up the guitar with the synth. Our frontman seemed a little restrained though, tied down to his instruments rather than being able to roam free. I suspect if he mastered a keytar he could do wondrous things.

Fun. burst out with “Out On The Town” – an appropriate opening track to kick the night off with. Though oddly it sounds directly ripped from the recording. Nate Reuss’s vocals are spot on measure, tone and even the sampling is identical. My concern of the show potentilly mirroring the recordings though were unnecessary as “One Foot” and “All The Pretty Girls” had the band hopping and laying down grooves. The latter of course set the predominantly tween female audience alight too with high pitch squeals of delight.

It was obvious their frontman was snatching all the hearts in the room but guitarist Jack Antonoff got to strut his stuff with some moody guitar work on “Why Am I The One”. Not to be outdone though, their multi-instrumentalist band mate Andrew Dost raised the stakes with a french horn making an appearance during “At Least I’m Not As Sad” alongside his fine keyboard skills. They managed to rock out with some crazy guitar shredding and synth mash-ups during “It Gets Better”.

As we charged through the set list the band took a small breather to joke around and crank out a mini acoustic version of Jimmy Buffet’s “Margaritaville” but really that was just a lead in to “The Gambler”, which Reuss explained he wrote about his parents’ struggle as a young family. It’s the back half of the night where the band delivers their big sing-a-long hits with “Carry On” and “We Are Young” back to back, inciting large levels of audience participation. Closing the main part of the set with a cover of the Rolling Stones classic “You Can’t Always Get What You Want” which I’m certain the parents in the room enjoyed more than their offspring. After the encore we’re played out with “Some Nights” and the heavily synth-altered vocal “Stars”, which thankfully wasn’t as bad as the recording as I much prefer Reuss’ vocals without the robotic influence.

Lyrically there’s a common thread through their songs, of angst and dealing with the complexity of life and relationships but also a sense of hope and belonging. It’s obvious that these emotions run deep with the young audience and the band feed off this energy to provide a lively and entertaining performance. I hate to use such a blatant pun but Fun. are definitely fun.