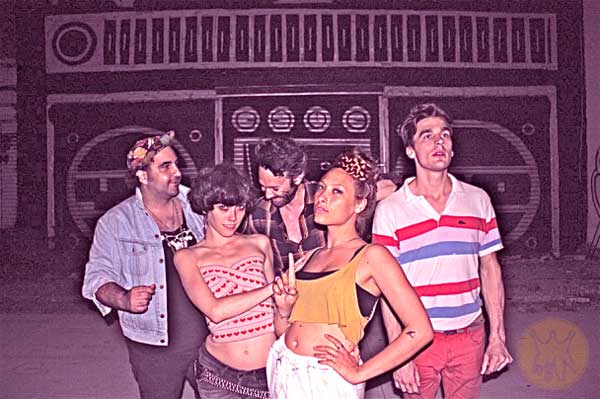 Howler were everything you’d expect from a bunch of boys who play American surf/garage rock – nonchalant, hip and way too cool for school.

Their set started slow, opening with “Beach Sluts” there was an air of despondency about them and there was no energy in their delivery. Fortunately they improved quickly and the mandatory ‘meathead’ section of the audience started going off in the mosh (i.e. jumping around violently and smacking each other’s chests, much like gorillas do but in a less endearing fashion). They’re a tight act who whipped up a massive wall of sound and seemed to really enjoy their time onstage. Highlights included ripper renditions of “Back To The Grave” and “Free Drunk”. The band ended the evening by making their fans night and inviting them up onstage to party during “Back Of Your Neck”.

‘The awkward moment when you try and be sexy and you’re just not sexy’ is the kindest way I have of describing the mess that was Friends live show. I can see why frontwoman Samantha Urbani needs to get her kit off onstage and grind on half the audience as it serves well to distract from her band’s incredibly average musicianship. Her vocals were lifeless and sounded like Betty Boop hopped up on helium and the band lacked conviction, there was no energy in their delivery and they managed to sound worse live than they do in the studio.

It made for painful listening as Urbani got down in the crowd and wrapped herself around various audience members serenading them like a cat on heat. Of course there was plenty of ‘dirty’ dancing with the punters with the biggest crowd response coming late in the night to their track “I’m His Girl”, before they ended the evening with “Sorry” playing to a much smaller crowd than was present at the beginning of their set. In short, Friends are up there in being one of the worst bands I have ever seen, which makes the fact that I missed Zulu Winter’s early set due to work/public transport delays even more upsetting as apparently they were amazing. Here’s hoping the next lot of Splendour sideshows are less of a bitter disappointment than that.

Note: It was brought to my attention post-publication that Friend’s guitarist quit the band prior to them boarding the plane for their Australian tour. This definitely would have impacted on the aesthetic of their performance, with limited time to rehearse and find their groove as a four piece. Perhaps next time round their live experience will prove to be as fun as their sound once they’ve had time to recover from losing a key member of their band.