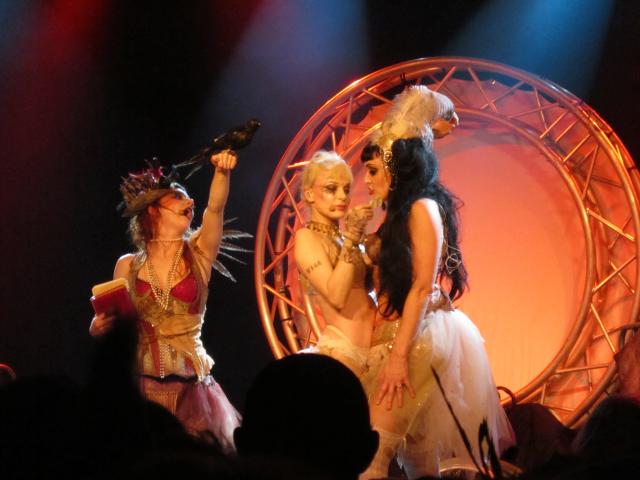 I’ve been a fan of Emilie Autumn for six years now. I first fell in love with her music at the age of fourteen, and was subsequently mocked for it by my high school peers, who didn’t appreciate her eccentric style. A few nights ago, I had the opportunity to see her live, and as much of the audience arrived in costume, I felt significantly less mockable. While the show wasn’t entirely flawless, Emilie and The Bloody Crumpets (made up of Captain Maggots, and The Naughty Veronica) presented a grand fusion of music, burlesque, comedy skits, and theatre — unlike any other I’ve witnessed.

The Bloody Crumpets were first on stage, taunting the audience to the eerily mechanical music of “Best Safety Lies in Fear”. It wasn’t until we heard the ominous ticking and rattling which signifies the start of “Fight Like A Girl” that Emilie herself appeared. The song, a frustration-fuelled anthem for equality, is founded on the unusual combination of dance beats and strings; and with it’s empowering lyrics, it made the perfect show opener. From there, Emilie powered through four more songs from her most recent album, including the achingly beautiful “What Will I Remember?”, and the rebellious “Time For Tea” — complete with fight choreography.

The second portion of the show was shorter than the first, but contained some extraordinary performances. One in particular was “Scavenger”, which saw Maggots emerge from the dark, in a monster costume, on stilts for the whole piece. With the dim lighting, the intimidating reverb on Emilie’s vocals, and the grinding music, this was easily one of the most captivating moments in the show.

The main set finished with the last track from Fight Like A Girl: the bittersweet “One Foot In Front Of The Other”, and a speech from Emilie about how grateful she was to perform for us. The fans screamed their love as she spoke, and began calling her back the second she left the stage. When she returned, her musical encore comprised of another speech, and two songs: “Mad Girl”, which she wrote at the age of thirteen; and “Thank God I’m Pretty”, which remains one of her wittiest releases to date.

The theatrical elements of Emilie Autumn’s show were definitely the most impressive aspects. Although I would have loved to hear her play violin live, the two hours she performed for were already bursting with content. Indeed, the three performers even returned after the encore for one final item: a mime skit, in which Emilie and Maggots prepared to duel to win the love of Veronica. Luckily, they decided to all love each other before anybody could get hurt, and they skipped off stage to the classic song “Always Look On The Bright Side Of Life”.