It’s been ten years since punk rock crew DZ Deathrays started making (delicious) bite-sized punk anthems, and there was only one way for the band to celebrate the momentous occasion; a massive tour with some fellow Aussie rockers. Saturday night’s Forum show had all the tellings of a perfect night, a stage set-up mimicking a lounge room, with couches and mattresses strewn across stage for a classic DZ Deathrays’ backdrop as well as a thrilling list of band’s to help DZ party deep into the night. The band celebrated alongside Aussie rockers Press Club, the magical Ali Barter, as well as joining with Canadian punk rockers PUP on the tour trail. 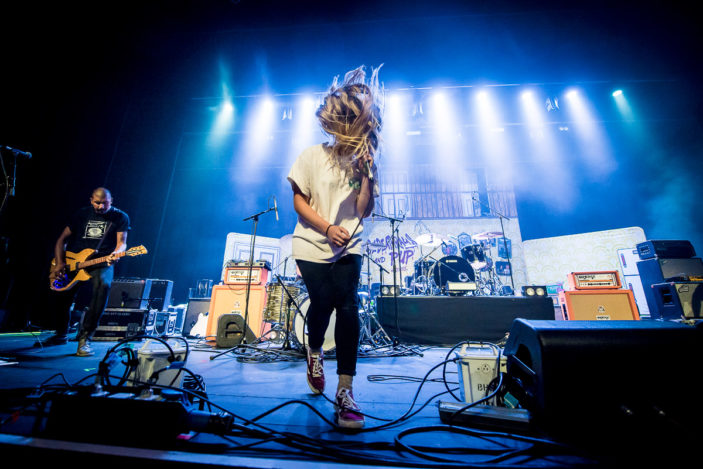 Press Club were a great choice as a warm-up at the Forum, and a ideal display of the talent in the Melbourne’s rock scene. While they were only able to play a short set list of nine songs, the Melbourne based Indie-punk rockers showed they were there to keep up with the best; as their lead vocalist Natalie Foster belted out some fiery vocals over the course of their forty minute set.

They opened strong right off the bat, with “My Body’s Changing”, one of the lead up single’s to Press Club’s debut album, Late Teens. The flared vocals, tireless drumming and thundering bass lines started the set off with a bang, while also jumpstarting the night.

Their setlist was filled with tracks from the album, with “Suburbia” and “Headcheck” leading the highlight reel from the performance. These were well met by the crowd who had no choice but to get behind the energy being given off by lead singer Natalie, her punchy vocals and no hold bar attitude on stage meant that it was easy to get sucked into Press Club’s set.

The band closed on “Stay Low”, the pumped up rock number finished up the set on a high note. The track; also the closing number on Press Club’s album, summed up their opening set well and provided a boost to the growing pack’s numbers, drawn to the band’s sound. 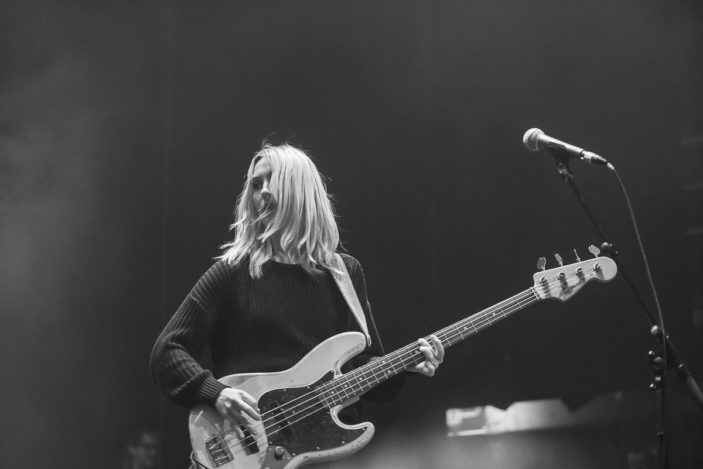 Ali Barter provided some grunge bite before PUP, as the bass heavy rhythmic rock and Ali’s shining vocals helped drive her set. While Ali’s set didn’t feature the paced sounds of the previous openers, her focus on lyrics and Ali’s vocals prowess helped set a new atmosphere within the Forum, breaking up the similar tones of Press Club and PUP. Yet, there were still moments of breakthrough rocking as solos came on strong toward the end of the set, with the band showing up with the skills to make their live performance rock.

“Please Stay” kicked off Ali’s set, the thumping bass creating a swirling juxtaposition with the Ali’s sweet, whimsical vocals on the stage but it all worked to create the right mix of bassy Australian grunge and that punk edge instilled through the night.

The set was full of highlights coming out of Ali’s album A Suitable Girl, with “Cigarette” and “Live With You” providing heavy fan participation, everyone singing and dancing to Ali’s tracks, while a solo in “Walk/Talk” helped cap off the magic of her and proving the talent that laid in her band.

Luckily, “Girlie Bits” wasn’t missed, the fan favourite closing out Ali’s set. The track, a constant feature of Ali’s live performances was met with a roaring reception as the crowd happily got behind the track and sang word for word alongside Ali to see to the close. 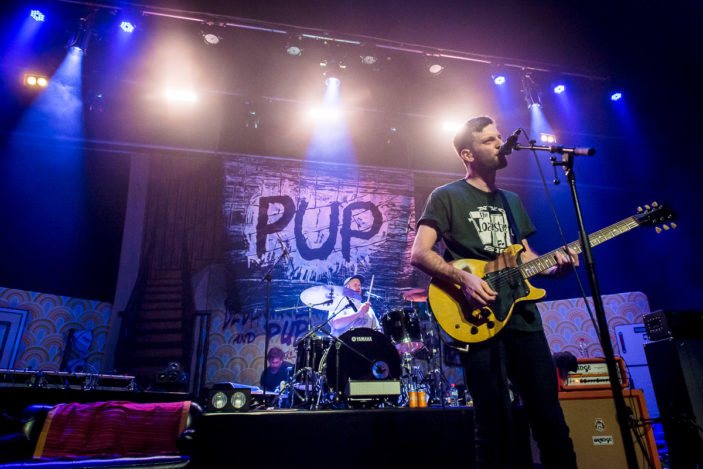 If anyone in the theatre weren’t acquainted with PUP before Friday night, they quickly became fast friends as the Canadian punk rock outfit tore the stage apart with their frenetic punk thrashing. The main pump-up before DZ Deathrays, the crowding horde in general admission were in safe hands and from the first chord of PUP’s set, the vibe in the room was on the up and up until DZ stepped out on stage.

While PUP’s thrashing about created an exciting feeling at the Forum, their music had some real moments of clarity, with PUP singing tracks with some definition and meaning behind them. “Reservoir” was one such number, still exuding that thick and fast punk sound, the lyrics ‘Forget longevity, we’re just tryna get by’, something easily relatable to a pit of people singing and moshing their way to midnight.

Including tracks “Doubts”, “If This Tour Doesn’t Kill You, I Will” and “Dark Days”, PUP went on to rock apart the stage with such feverish intensity it they could almost be mistaken as the headline performers.

The act wasn’t over yet though, with one more track in PUP’s musical arsenal, “DVP” took all the spirit of PUP’s entire set and funnelled it back through the band, then crowd. It was an action packed track of flurried guitar work, (thrashing) drum lines and lead vocalist Stefan’s (thrilling) lines. 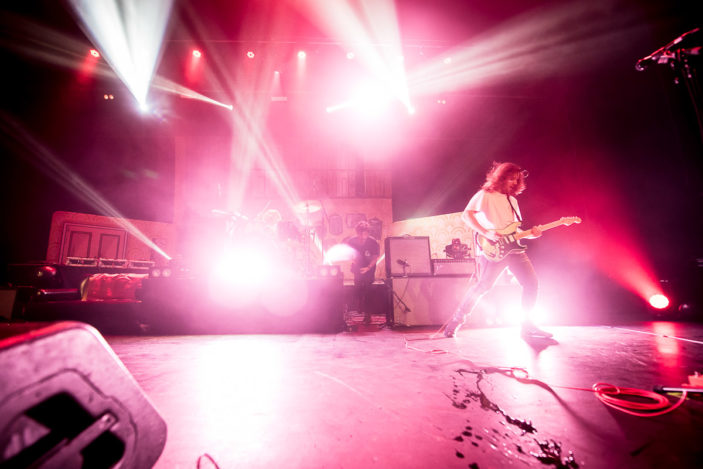 If the energetic reactions to the opening acts wasn’t clear enough, the cheers leading through the “Intro” for DZ Deathrays made it quite obvious that the people were ready for a big set and DZ were keen to deliver it; with a setlist made to display their full range of rock from over their ten year stint as one of Australia’s premiere punk-rock outfits.

The set played out perfectly to the tune of DZ Deathrays’ rock, as the band jumped straight into their power packed party with the duo crushing “Teenage Kickstarts” before the extreme shredding power and yelled vocals of DZ Deathray’s 2016 single, “Blood On My Leather” graced the stage.

“Gebbie Street” topped the energy through the middle of the set with it’s raw vicious chord work before, “Reflective Skull” and “Afterglow” led into “Dumb It Down” a track slow enough to give the crowd a minor reprieve from the high paced tracks and a quick moment to breathe. The reprieve didn’t last long though, as the DZ trio exploded into “Pollyanna”, the funky bass grooves and bopping chords pushing the dial straight back to max.

“Feeling Good, Feeling Great” and “Like People” were major set highlights, the well known tracks off of the band’s most recent album, Bloody Lovely displayed the love for the DZ sound, even ten years after the start of the band, but it was  tracks such as “Gina Works At Hearts” and “Total Meltdown” that really had the crowd’s blood pumping.

The mosh was where the ten year anniversary was celebrated the hardest, with a throbbing mass of people constantly thrashing to the beat of the tracks. Death pits, crowd surfers and beers were all part of the party and made the night of fun even more exciting, with DZ Deathrays able to tell everyone had a good time.

The one more song chant was deafening, but it was worth the wait as the encore was made up of the most anticipated songs of the night and as the distorted opening strums of “Cops/Capacity” burst through the amps, the crowd seemingly lost their minds. The ragged faces of the pit were suddenly re-energised powered by the “Cops capacity, cops, cops, capacity” chant reverberating through the Forum theatre. Second to the end, “Ocean Exploder” burst out, the distorted track’s rough vocals quick guitar runs and storming drumming coupling well amidst “Cops/Capacity” and the closing number.

“Shred For Summer” rounded out the three song encore, the ripper track a last hurrah for the evening. As much as everyone knew the track would finish the night, hearing the opening chords sent a shiver of relief and excitement through the crowd. The fan favourite track and Shane Parson’s famous scream at the start of the track sent the fans into overdrive, with the roar of the crowd’s singing only drowned out by the intensity of the band’s shredding.

DZ Deathrays head next to Sydney’s Enmore Theatre on 20th September and then to Brisbane’s Tivoli on 21st September, with PUP and special guests.

The reviewer attended the show at The Forum Theatre in Melbourne on 15th September 2018. Photos by Rebecca Houlden.