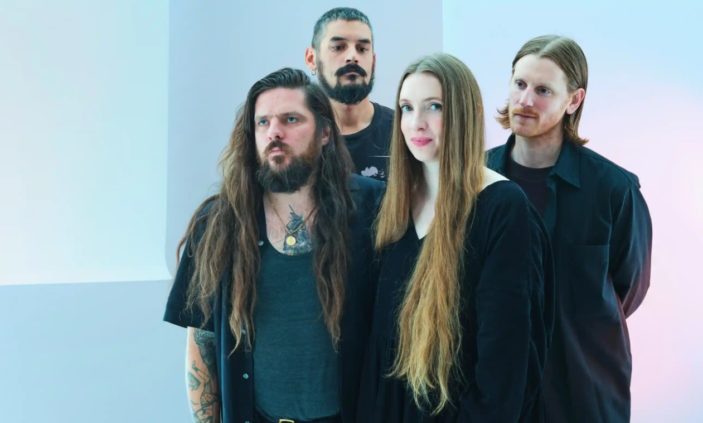 Is post-Covid a genre? Dry Cleaning are one of the more curious acts to build a fanbase during the lockdown era, but having taken advantage of the lack of touring opportunities by releasing two albums across an 18-month period, they arrive with a more solid catalogue than many newer bands. On their first Australian tour and in the country for Meredith, the show quickly sold out on the strength of second album Stumpwork, and a word-of-mouth fanbase eager to share their mix of post punk, indie and beatnik to their friends.

Gold Coast band Girl and Girl were in many ways a perfect support choice, bringing a chilled-out yet sophisticated indie with singer Kai Aubort’s vocals reminiscent of a more tenor-range Jack Ladder.

Stumpwork highlight “Kwenchy Kups” sings ‘Things are shit but they’re gonna be OK’, a fittingly sardonic way to open a show for a band like Dry Cleaning, but following it with arguably their most popular songs “Gary Ashby” and “Scratchyard Lanyard” might’ve shown them play their cards a little too early. This, coupled with a lacklustre sound from the PA (audience were able to hold a solid conversation throughout – a little disappointing for a club-sized venue) meant the rest of the set became a little one-note.

Nevertheless, the band have a wide range of influences, with guitarist Tom Dowse and bassist Lewis Maynard’s hardcore and metal influences shining through both in stage presence and tracks like “Hot Penny Day”. Dowse’s twelve-string was also a nice addition to the band’s overall sound. Ripping through a decent mix of both albums, the crowd were a satisfied bunch.

Just as they began with a sly message, the band finished with “Magic of Meghan”, a commentary on the UK press coverage and racism of the Duchess of Sussex. An encore saw them ride out with album-opener “Anna Calls from the Attic” and you realise that Dry Cleaning really are a band that plays things backwards, which is just how they want it.