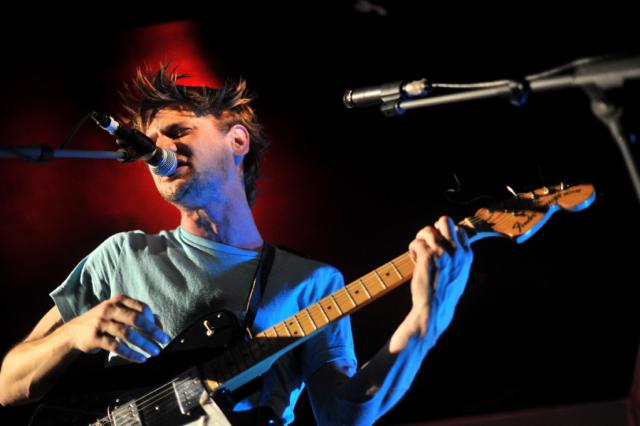 The balmy late-September air fills Darwin’s stalwart live music venue, the Railway Club, as it one again goes through an on-again, off-again relationship with its air conditioning. Instead, a small upright fan does what it can.

The night opens with local favourites, Green Stone Garden. Soon to record their debut EP with Stephen Schram (San Cisco, Little Red, Cat Empire, Little Birdy), Green Stone Garden’s sound feels like the embodiment of the tropical Top End. While never straying too far from an organic sounding folk, as with the song ‘Beautiful Disgrace’, they’re also partial to a fun kick of K-pop mixed in with a hint of the calypso, and then, something deeper with frontman Mike Meston’s soulful vocals slipping effortlessly to pathos-laden falsetto in ‘Tired Hands’. Laced with melodic harmonies, it is played to full effect with a natural chemistry of the band. (Full disclosure: Green Stone Garden drummer, James Gough and Meston are NOOK partners in crime. The intended support JAPE from Ireland could not make it.)

By the time Dappled Cities come on, the room has filled and the upright fan now blowing in the direction of the stage has the added side-effect of giving Dave Rennick and Tim Derricourt a comic and appropriately dramatic wind-in-the-hair rock star look. They are delighted to be in Darwin, Derricourt can’t stop telling us, a huge smile plastered across his face with puppy-like enthusiasm.

They are quick to engage the crowd, beckoning everyone closer from their safe distance, and then proceed to woo us with a shamelessly pop, reverb-heavy version of ‘Holy Chord’. Their highly stylised indie-pop sound draws on a cacophony of excellent sounds from bands past, from Blondie to Bowie, channelling the 70s and 80s, back when synth was king.

And then again, ‘Waves’ from Lake Air is a softer sound, something George Harrison might have written; it all just goes to show that even though they’ve wholeheartedly climbed aboard the nouveau-pop train that’s wending its way through Gen Y iPods, there is more than one trick in this bag of pop. Just a few songs in, they’re playing synth-heavy, bass-infused ‘Run With the Wind’ with its almost psychedelic riff, and the crowd is well and truly won-over.

Derricourt plays his role of frontman with gusto, stepping completely into character and owning it with a delightfully theatrical brand of rock star. Not one for that shoe-staring business, he locks eyes with his audience and engages in some full-body dancing, bouncing, leaping and general rocking-out. Rennick (who is barefoot; in good company among the permanently sandled) follows suit along with and Ned Cooke (keyboard, sampler) positioned front and centre and Allan Kumpulainen (drums) and Alex Moore (bass).

All of them go all the way with their performance; what could might come over as affected in less capable hands, is deeply charming, a gig nailed so hard that it almost feels that Dappled Cities is an outfit born to play live. An upbeat, high-energy rendition of the ordinarily low-fi ‘Fire Fire Fire’ makes good use of sweet-sounding falsetto harmonies, and ‘Vison Bell’, verging as it does into sentimental territory, gets the full Derricourt treatment, keeping it safely in the hands of a gentle irony.

They hold nothing back with an intricately woven, earnest enthusiasm running through the set. ‘The Price’, a light-hearted, almost camp number, played in the spirit of cruise-ship entertainment gone incredibly right, has a full-throttle presence, performed with complete commitment; there is no half-way tonight, and the enthusiasm is infectious. If live music were represented in colour, this one would be a dazzlingly kaleidoscopic montage with 3D effects. I can’t help but think to myself that life really should be a Dappled Cities gig.

They are possibly rocking out too hard, when the front of house speakers lose power. But, with the crowd’s vibe perfectly instep, not even a technical hitch with ten minutes of semi-awkward silence can dampen the show. Derricourt proceeds to make small talk about the local Saturday markets, banana smoothies and their planned daytrip to Litchfield National Park, before he saunters casually into the nosebleed section for a chat. It’s a perfect read of a Darwin audience.

The speakers cannot be fixed, but they make a full comeback for their last four songs, including ‘The Weekend’, and their Lake Air single ‘Born at the Right Time’, an incredibly fun and all encompassing dance song, even in its less bass-y incarnation.

Derricourt thanks us for having them, and apologises for breaking our venue, but the crowd, it seems is unfussed. We’ll blame it on the boogie.