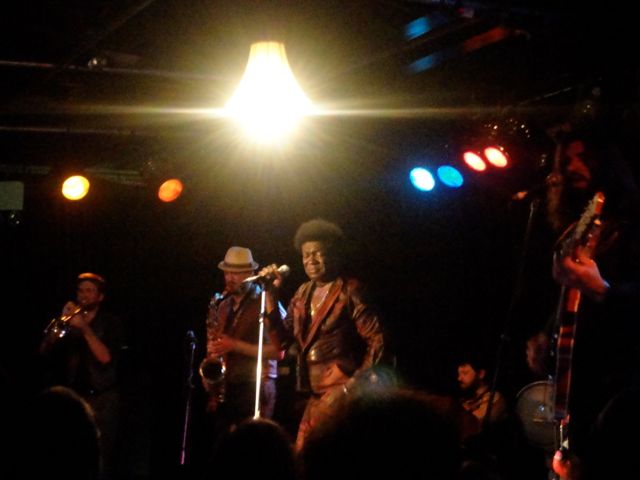 Wednesday night saw The Bakery play host to one of the world’s latest soul sensations, Charles Bradley. Backed by His Extraordinaires, Bradley put on an impressive show, and one, which will surely stick in the memory for quite some time.

DJ Charlie Bucket warmed up the crowd, with a few choice selections, including the odd track by Bradley’s label mate Sharon Jones. Then in no time at all it was time for local soul singer Odette Mercy and her band The Soul Atomics to kick start the evenings live proceedings with a solid performance; that served as the perfect warm up for the main act. Mercy is an energetic and engaging performer, a bubbling personality on stage. The band were tight and professional, dressed in matching black suits, though the bass perhaps featured a little too heavily in the mix, with Mercy’s vocals getting lost every now and then. But all in all it was a good solid performance, and one that has me wanting to search out more of their work.

It wasn’t long before The Extraordinaires took to the stage, and as seems to be the way with soul shows, launched straight into an instrumental jam, before summoning Bradley onto the stage to appreciative cheers from the audience. Having worked for a while as a James Brown impersonator, there was definitely a touch of the Godfather of Soul in Bradley’s appearance and on stage antics; dressed in a bright red sequinned jacket, Bradley and his band set about playing tracks from his debut album. Part of Bradley’s appeal is undeniably his voice, which at times can be raw and primal, an impassioned screech and at other times can be rich and delicate. The evenings performance was split into two sets, with the highlight of the first being the powerful “This World Is Going Up in Flames” and “Heartaches and Pain”. The set ended as it began, with the band launching into an instrumental as Bradley left the stage.

There were some myself included, wondering if that was going to be it for the night, but by the end of the instrumental, Bradley was enticed back on stage. It seems it was just quick break for a costume change. Swapping out into a gold/bronze jumpsuit and leather jacket. The second set kicked off with a brilliant cover of Neil Young’s “Heart of Gold”, which sounded fantastic reworked as a soul single. Despite his age, Bradley released his debut album at 62, the evenings performance was high in energy, with Bradley frequently breaking out the dance moves, or dropping to the floor with the mic in hand.

You certainly got the impression that Bradley was pleased to be on stage and appreciative of all the attention and applause he was getting from the audience. To the extent, at the end of the set, he literally waded out into the audience, to shake hands and hug members of the audience. A sight you don’t tend to see at most gigs. But one that seemed quite fitting on this night.

All in all, it was a superb performance from both Bradley and his band The Extraordinaires. They were tight throughout and never looked to upstage Bradley. Instead they were happy to stay back. That’s not to say they didn’t impress however, there were some great individual performances throughout, with some great soulful horns and stellar guitar and bass work. This was a night not to be missed, and even the most jaded of souls would have found themselves leaving with a smile on their face.