Day two of Beyond The Valley topped an already impressive first day!

Nicole Millar set the tone for the day, leaving a predominantly young female crowd wondering how she isn’t already an international sensation. Although her song “Blindfolded” received a huge  crowd sing along she proved she has a whole catalogue of feel good pop songs up her sleeve and is far from a one hit wonder. Nicole Millar commanded the stage from the moment she got on, acting the part of a true pop star or 18 year old festival goer in a cute green checkered set and matching sunnies.

Although her voice is always at the forefront, the electronic backing on most of her songs differentiates her from other artists and shows her professionalism.  I hope in the future she gets the chance to take the path of artists like Dua Lipa who has cemented herself as the go to vocalist for world class electronic producers. This potential has already been made clear from when she was a vocalist for Peking Duk on their track “High,” which she closed her set with.

Heading over to the dance tent for an early afternoon rave, Sonny Fodera the king of remixes put on a high energy house set playing tracks like Green Velvet’s ‘Deceiver” and of course Fisher’s “Losing It,” a staple of any tech house set. Judging by the floods of people running to the stage to hear Sonny Fodera play Fisher I can’t even imagine the crowds rowdiness when Fisher is actually standing in front of them tomorrow doing his iconic flick of the wrist dance move.

indie pop/hip hop/electro duo Boo Seeka are the creators of some of my all time favourite tracks like “Deception Bay,” “Does This Last” and “Turn Up Your Light” and yet they still managed to exceed my already high expectations. Showing a whole other side of Boo Seeka, this set turned their melodic and dreamy tracks in to synthy electro dance tracks.

A stunning acoustic cover of a snippet of “Young Dumb and Broke” lead in to 2017 hit “Does This Last.” This track has a real warm ripeness to it and with the duo insisting everyone put someone on their shoulders it was a real uniting, feel good 3 minutes. 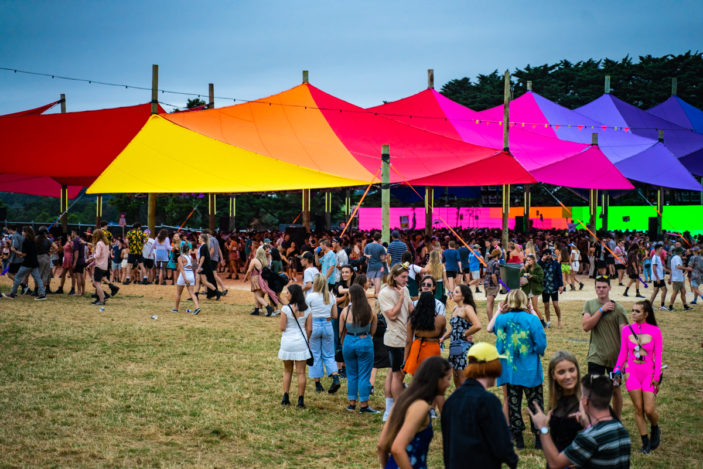 Alex Lahey put on a dynamic and lively set, packed with all her alt-rock relatability.  Her first ever festival slot was at Beyond The Valley three years ago as a Triple J Unearthed competition winner and she modestly thanked everyone for the support she has received since then.

All her songs were well received but “Every Day’s The Weekend” ignited the crowd and kept the energy at that level all the way until it exploded again in “I Haven’t Been Taking Care Of Myself.” Alex Lahey politely invited the crowd to sing the intro back to her which acted as an epic build in to the song. By the time the opening lines “You were my drug, now I’m withdrawing” started, the entire crowd was already fist pumping and dancing to her charming catchy song.

I would like to consider myself as reasonably capable in a mosh pit situation, having braved the likes of Violent SoHo, The Smith Street Band and Amity Affliction. I once saw a meme about hearing the opening lines of DZ Deathrays “Gina Works At Hearts” and knowing that your only goal is survival. I have now learnt about the severity of a DZ mosh, barley making out alive…in the best way possible!

This set had everything from orange flares exploding in the middle of the mosh suffocating everyone involved, head banging and a lot of guitar shredding. The set got better and better closing with their more melodic sing alongs like “Total Meltdown” and the Hottest 100 contender “Like People.”  I feel like a lot of people would have entered the DZ set to have a crack in the ever so competitive mosh but would have come out with a new appreciation of the musicality behind their punk rock.

The good thing about not having too many stages is that you see artists you might not always choose to see. I have always understood why people liked Vera Blue but didn’t think that she could bring much more from her studio recordings to her live shows. I was wrong again!

Apart from obviously having insane vocal capabilities, the stunning creamy production behind all her tracks added an extra spark to her almost opera like pop.  Attracting one of the biggest crowds of the festival, I was glad to be one of these people, gaining a new appreciation for Vera Blue as not just another aspiring pop artist but as an intricate, whimsical performer.

American comercial hip hop artist SuperDuperKyle was next to take the stage. I was hoping he was going to prove himself as more than just a two hit wonder who people would forget when the success of  “I Spy” and “playinwitme” wore off.

As I generally am not an American hip hop fan I have been learning a lot more about the seemingly essential hype man/dj backing up the artist. His hype man put on a ten minute show which gave SuperDuperKyle a run for his money, playing more than just “Mo Bamba” and “I Like It” like every other one seems to do.

Opening with “playinwitme” it was impossible not to enjoy, the whole crowd with their own space just going crazy to this weirdly catchy track. From here on the hype man tried to take over the show, forcing the crowd to dance, even yelling over the top of SuperDuperKyle while he was singing.

Although it was way overdone the set was crafted to perfection, with Kyle even throwing in a fake fainting act where he was caught by one of the security guards.  Although it was a fun set for everyone and Kyle’s large persona carried the set, I can’t see Kyle progressing to be an artist we talk about for years to come.

Unlike The Jungle Giants which can’t seem to take one step in the wrong direction.  I have always looked at The Jungle Giants as an ideal daytime set at festivals, whose groovy sing alongs set the mood for later acts.  I loved this about them and was gobsmacked after their performance at Beyond The Valley seeing what to me was like a rebirth of the The Jungle Giants – or at least my view of them.

Previously when I had seen them perform I wondered why in short sets they chose to play their predominantly instrumental tracks instead of hits like “Mr Polite” and “Come And Be Alone With Me.” For the first time I understood what they were trying to do with the strong disco tech backing behind songs like “Quiet Ferocity” and “Blinded” penetrating through each body and forcing everyone to dance. With extended intros, a more electronic version of “People Always Say” and a pulsing beat running through each song, this set was like a typical Jungle Giants set on steroids.

Safia closed out the night with a solid performance of all their classics from “Take Me Over” to “Together Locked Safely.” They provided us with the first confetti cannon of the festival, which is always a huge boost of euphoria for any set. Their light show and ambient transitions between tracks was impressive but overall after The Jungle Giants set I was craving something huge to close off the night which for me Safia’s chilled, moody indie pop doesn’t provide.

Oxford indie rockers, Foals have become known for also throwing down some beats at after parties round the world in their dj sets. This was the only disappointment of the day for me. With such a huge catalogue of hits that could easily close the main stage, they were instead playing in the afternoon in the dance tent. At first I was a bit intrigued and thought surely they would still play some of their classic songs like “My Number,” but for the short bit I watched between Boo Seeka and Alex Lahey they did appear to just be playing a techno set like everyone else in the dance tent.

Walking back to my campsite grinning from ear to ear I was thinking about why this day was so much better than the day before. I still can’t pin point it, but every single person just seemed to be there to have a good time, which sometimes gets lost at festivals with people more interested in taking photos, getting blind or just being BORING.

With a half an hour break between all sets on the main stage I was worried I would be bored. Turns out I barely even left the main stage all day as I was having far too much with the djs between sets pumping out classic after classic and everyone making friends, getting down and ensuring the party never stopped.

New Years Eve is tomorrow which is also the last day of Beyond The Valley. The lineup is the biggest of all the days with acts from PNAU, The Kooks, Duke Dumont, Fisher, Ball Park Music and more!