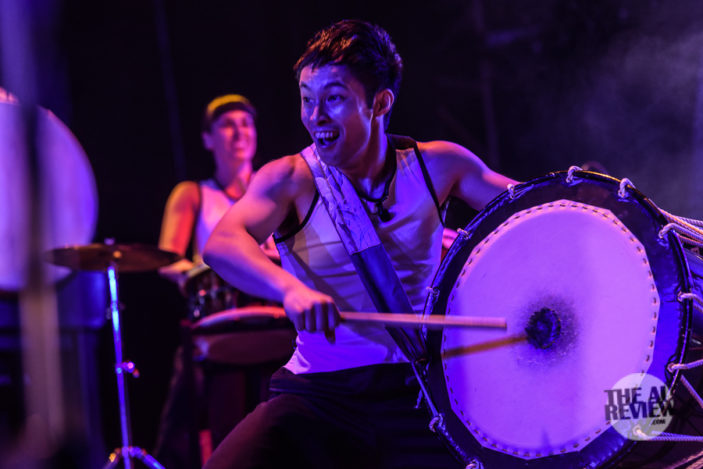 Celebrating thirty years of presenting world music, WOMADelaide has weathered COVID restrictions to put on a massive show for 2022. As international travel uncertainties played out, the focus this year has been on highlighting Indigenous and Pacific Island acts.

Next up, a clash of acts made it difficult to choose. Mutti Mutti man, Kutcha Edwards, who has played with Blackfire and the Black Arm Band, fired up Stage 2 with his ‘Bidgee blues’ music. Whilst, over at stage 3, Springtime brings together three renowned musicians; Gareth Lilliard (The Drones, Tropical F*ck Storm) on guitar, Jim White (Dirty Three) on drums and Chris Abrahams (The Necks) on piano, who played an eclectic mix of experimental noise, jazz and rock. The enigmatic masked trio, Glass Beams played an uplifting dance set over at the intimate Moreton Bay Stage.

In between all this, roving performers, Gravity and Other Myths presented a silent show around the Cathedral of Light.

Baker Boy burst onto the main stage in a frenzy of activity, featuring his 2021 album Gela. Hailing from the remote communities of Milingimbi and Maningrida, Baker Boy raps in the Yolngu Matha language of his Arnhem Land family.

Sydney based drumming collective Taikoz played an impressive set of primal drumming and dancing. The odiako drums can weigh up to 200kg and the energy from the stage full of these was invigorating.

Closing up on the main stage, New Zealand reggae soul band L.A.B. fronted by Joel Shadbolt, had the crowd enthusiastic for more. The energy and excitement that this band exuded, shows that they will be a force to be reckoned with in the coming years.