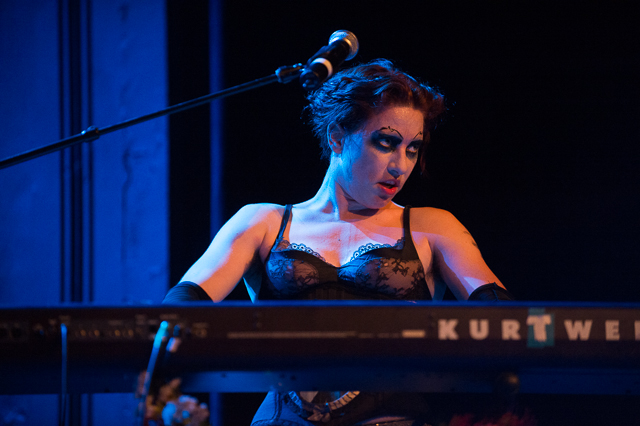 Amanda Palmer has an intensity that colours her musical career as much as it does the relationship with her fans. We love it. Standing outside the Enmore Theatre, it was clear we’d been touched by it too: the floor length black coats, shirts from last tour, lacy corsets, and various piercings earn us weird looks from pedestrians, but no-one cares. We chat. We sing. We wait for doors.

Inside, DJ Sveta plays us remixes of everything from M.I.A. to PJ Harvey. She’ll be playing a fair bit throughout the night, whenever the stage setup needs to be changed. At 7:30pm, Amanda Palmer walks out in a white dress, with white flowers in her hair, and no shoes. She throws donuts into the crowd, explaining that she’s been eating them backstage with some of her Kickstarter backers — the fans who bought the ‘Donut With A Rockstar’ package, inspired by her phone’s autocorrect of one of her songs. She licks the icing from her fingers, giggling because she’s managed to get it all over the microphone, and introduces her first support band, Die Roten Punkte.

The duo claim to be a German brother and sister, called Otto and Astrid. In reality, they are Australians named Clare Bartholomew and Daniel Tobias, but we go along with the act. Their set up includes Otto on electric guitar, Astrid on drums, and both singing in exaggerated German accents. Their performance is equal parts music and humorous banter: the first song ends abruptly when Astrid accuses Otto of playing a wrong note. She demands he apologise to the crowd.

The pair are very comfortable on stage, and the audience loves their dramatic skits. The highlight of the set is the final song, “Ich bin nicht ein Roboter (I Am a Lion)” [“I am not a Robot (I Am a Lion)”], which features everything from a catchy keytar riff to a dramatic lion’s roar. Amanda reappears at this point and joins in the choreography. Their set is the perfect length, and is rewarded with applause and laughter.

DJ Sveta makes a brief return, while the stage is changed.

The second support act of the night is Jherek Bischoff — the bassist from Amanda’s Grand Theft Orchestra. She accompanies him on stage, this time dressed in a glaringly yellow outfit she purchased in Perth. After urging us to buy some of his music, she leaves him to the mercy of the crowd. The first song he performs is a bass cover of a song by the Kronos Quartet; layering and looping different riffs for power and volume. The second is the total opposite: a song he composed himself on the ukulele that is intended to be performed by an orchestra. The instrumentals provide a nice contrast to the previous set, and even though it’s short, it touches two very distinct styles and approaches to music.

Amanda then introduces four of the editors of the University of Sydney’s student newspaper, Honi Soit, to us. After recounting their recent grapple with censorship, they announce that Amanda has autographed several of the remaining issues of the paper, which will be sold later in the year with the proceeds going to charity.

DJ Sveta appears for the final time during the night, playing her last mix of music.

It’s 8:50pm when the headline act begins, and Amanda’s wearing yet another outfit: with her famous bra-corset-tight pants combination, and an excessive amount of black eyeshadow, she finally looks like a rockstar. Fittingly, the first song performed is “Do It With A Rockstar”. She launches herself into the audience to crowd-surf, sending fans, photographers, and security guards rushing towards her. She’s back on stage for the next song, “Killing Type”, and then moves to the keyboard for the first Dresden Dolls track, “Missed Me”. The audience knows every word of every song, and are eager to sing, clap, jump, and dance along.

Only six of the eighteen songs performed are from her most recent record, Theatre is Evil — the remainder are from earlier solo work, the catalogue of the Dresden Dolls, or are covers of other artists, including ambitious takes on “Smells Like Teen Spirit” by Nirvana and “Sweet Dreams” by Eurythmics. Highlights are hard to pick, but “Get It Back”, “Map of Tasmania”, “Astronaut (A Brief History of Nearly Nothing)”, and “Girl Anachronism”, are all favourites of mine that are played. We’re also treated to a riveting guest performance of “Seven Stone” by Mali Sastri, longtime roommate of Amanda, and lead singer of the band Jaggery. When Amanda wonders out loud if there’s something in the water at their house that produces ‘angry feminist women’, we laugh and agree.

The show lasts nearly two hours, and Amanda never slows down or misses a note, despite with her frequent stage diving. We’re captivated by her presence, even when she’s speaking, and in the minutes before the encore, the crowd clap and cheer and stomp on the floor with a need I haven’t heard before. The final song, “Leeds United”, sees the return of Die Roten Punkte and Mali Sastri, who dance just as wildly as the audience.

When the stage is empty and the lights are up, we rush to the merch table. She’ll be down soon for a signing, and the space is packed with people clutching their newly-purchased posters or CDs. It will take around half an hour for her to emerge, but the air is electric. In the meantime, we chat. We sing. We wait for Amanda.

Photo taken by Johnny Au. View the rest of the gallery here.