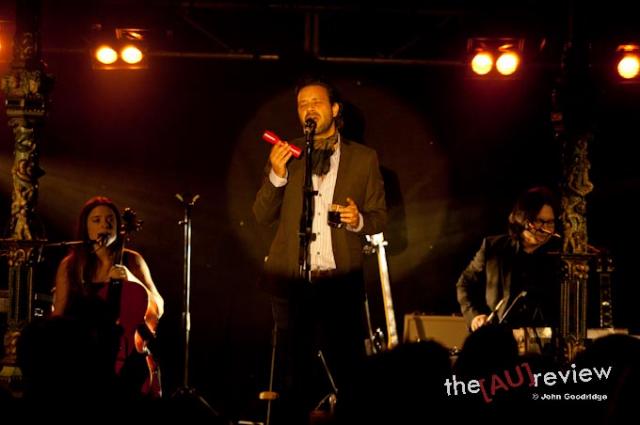 Being the progeny of influential songwriter and poet Leonard Cohen would no doubt have one draw back; how do you live up to expectations? Judging by the size of the turn out for Canadian musician Adam Cohen’s one-night-only Adelaide Fringe performance on Thursday, and the enthusiasm of the crowd, Cohen clearly has a following of his own. Performing at the Idolize Spiegeltent, the performance was sure to be a unique treat.

Cohen is quite debonair and dressed impeccably complete with cravat, he looks quite at home in the intimate, subtle lighting of the Spiegeltent. He greeted the crowd of three-hundred-odd fans with a raise of his glass and a nod, before launching straight into “Lie Alone” off of his most recent record, Like a Man.

He tells us that he is feeling under the weather and is not sure if he will make it through the set, as he caught the flu off of some “floozie.” Someone in the audience shouts that it serves him right. The show must go on however, and Cohen continues with two more tracks from the new album, “Sweet Dominique” followed by “What Other Guy”.

After giving it his best shot for the first few songs, Cohen obviously begins to feel a bit worse for wear, and eventually calls for a stool to be brought up. He tells the crowd that he has never done a show sitting down before, adding: “I just had a flash of what it would be like touring at 78 years old.”

It is an intimate setting for Cohen’s particular brand of melancholic, soulful crooning. This was my first experience with Cohen’s music, and I was not sure what to expect. Naturally, I imagined he would have similarities to his father in voice and musical style. The thirty-nine year olds lyrics paint an image of him as a bit of a man-about-town, with a great deal of songs with girls names in them (a different girl each song).

Cohen’s band included cellist Mia Bloomfield and Don Miguel de las Chaves, who is responsible for guitar, bass, percussion and keys. Cohen jokes that he met de las Chavas in a public bathroom where he “taught me to make love to a man,” to which de las Chavas replies: “they can’t handle the truth, man.” The guitarist then breaks into the riff from “Faith” by George Michael. The two gentlemen seem to have a good chemistry between them, and Cohen clearly has a sense of humor.

He is a natural story-teller, breaking up the set with anecdotes, jokes and parables. For someone who was obviously unwell, he maintained the atmosphere, momentum and mood of the show well. Cohen explains that his new album feels like his first album, as it is much more in keeping with the folk music traditions which he was brought up in. The new songs dominated the set, with “Matchbox,” “Stranger” and “Beautiful” a sweet number which Cohen explains is dedicated to his five year-old son.

Smiling, he tells us that he can tell by the demographic what kind of fans are present. This was the first observation I made also, the majority of the crowd are mature fans. It seems sad that the climax of the show is reached when Cohen sings one of his fathers songs, rather than his own, but, as he points out, that is why the majority of the crowd had come along. “Sometimes the anticipation of pleasure is better than the pleasure itself,” he smiles before launching into Leonard Cohen’s “So Long, Marianne.”

Cohen ends his short set at the Spiegeltent to lavish applause from his fans, and gathered his band around him to take a bow before graciously leaving the stage. Adelaide was fortunate that the singer had made it through the entire gig, considering the state he was in. The crowd pour out into the bars and sideshows of the Garden of Unearthly Delights, and I am sure Cohen went straight to bed with a cup of Lemsip.