Lime Cordiale are kicking off our summer with their very own festival, teaming up with Smirnoff to bring you Smirnoff Seltzer Party Yard. It’s the drink of the minute, seltzers, crossing over with the band of the minute; and it’s set to be a line-up you won’t forget.

The Northern beaches brothers are known for their annual festival called The Squeeze, which sees smaller Australian acts provided a leg up on a stage they wouldn’t otherwise have the chance to play.

With 2020 throwing spanners in the works, The Squeeze has been squashed; but Oli and Louis Leimbach have made limes into ‘lime cordiale’ with other plans to ensure their championing of up-and-coming Aussie music still goes ahead.

‘We originally started [The Squeeze] because we weren’t really getting booked for any festivals. We were maybe a little bit bitter about that,’ said Oli of its creation. ‘And so we’re like, “Oh screw it, we’ll start our own festival. And we’ll book artists that we really like that probably themselves don’t get booked on enough festivals.”

‘That’s why we kind of, when we were thinking about doing something in the backyard, it sort of made sense. It felt like another Squeeze festival, it’s a smaller version really. Televised version in a way.’

Having curator control over the line-up, Smirnoff Seltzer Party Yard will see ILUKA, Jaguar Jonze, Touch Sensitive and Lime Cordiale kick off vacay season in a backyard gig streamed on Saturday 19 December. The event is set to take place in the boys’ very own backyard, hosted by DJ Anna Lunoe and attended by their humble housemates.

‘It’ll just be all out of our backyard, barbecue going on. The thing is there’s not really supposed to be much of an audience there but you’re allowed to have people from your own home, so we’ve got like eight people that live at our house. So there’s going to be a bit of a crowd,’ said Oli.

Smirnoff has given one lucky winner the chance to host one of the Party Yard stages at their house where Touch Sensitive will be playing his set from! Anna will cross over during the stream to check in on Touchy and how his sets are going.

Off the back of their Breakthrough Artist ARIA success and their deluxe studio album, 14 Steps To A Better You (Relapse), Lime Cordiale are tipped to put on one hell of a show. Even if the summer is sweltering, at least they’ll have sweet sweet seltzers to sip – our bet is the lime flavour. 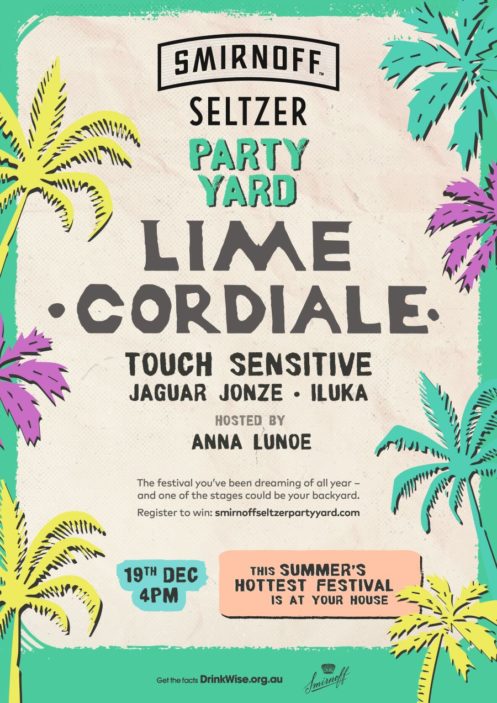