Interview: The Jensens unpack “Paper Walls”, the first taste of their forthcoming album Hammer and Blush 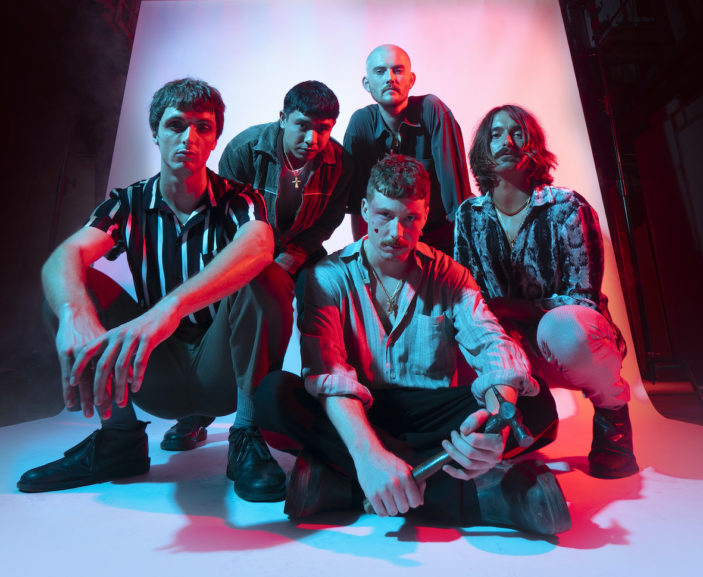 Brisbane indie pop rock act The Jensens have just released a rollicking new single “Paper Walls”. The boisterous tune is the first taste of the groups forthcoming album Hammer and Blush, scheduled for release on May 21, 2021.

The new single is accompanied by a vivid music video, created in collaboration with visual artist Unclechronicbone.

The band will be launching their single with a series of COVID-safe shows in Queensland, starting at Solbar on November 6, followed by Mo’s Desert Clubhouse on December 4 and finishing up with the official single launch at Black Bear Lodge on December 11.

The AU review were thrilled to interview the band to find out more about their latest single and forthcoming album.

2020 has of course been a crazy year with the pandemic. How did you keep sane while in lockdown?

Being with friends and family where possible, reading a lot and writing and working on music almost every day.

You’ve been busy making music during this time – you’ve just released your new single “Paper Walls”. Can you tell us a little about the recording of the song?

I (Joe) wrote this track originally in Ableton and didn’t think all that much of it, we were sharing ideas so I put it on and we all immediately saw the potential, it had a cool britpop vibe and we were already starting to add layers as we listened to it the first time together. We did a demo then added the vocals and then we ended up with this distorted, pushy, buzzy, synth layered beast.

You’ve stated that your new single “Paper Walls” is about pulling yourself up out of self-doubt. What tips do you have for all the self-doubters out there who might be reading this article?

Find ways to feel comfortable in your own skin, I lean on substances to give me confidence a lot because I have some pretty deep seated issues surrounding self worth. For me exercise and open and honest conversation, even and especially when it’s hard, is the key. The more I can learn to love myself, the body I was born into, my desires, the things I’m good at and capable of, the less I Feel the need to use substance. When you’re proud of who you are you’re capable of a whole lot more!

You recently released the music video for “Paper Walls”. It’s a collaboration with visual artist Unclechronicbone. Can you tell us a little about the making of the video and how this collaboration came about?

I met James (unclechronicbone) through a mutual friend whom he made some album artwork for, I immediately loved that album cover. I followed James from the moment I saw it and went to his exhibition last year ‘Flesh Car Valet’ where I confessed my obsession with his work and asked him to jump on board for our album. He vibed the idea and we became great friends, this video is just honestly us all having a really good weekend together and James captured it on film.

Your new album “Hammer & Blush” comes out May 21st, 2021. What can fans expect from this new release?

15 tracks, some of the best songs we’ve ever written. There’s straight up pop songs, psychedelic adventures, dance floor anthems, songs about computers, songs about love and loss of love, a plethora of sound and mood for everyone to enjoy.

What tunes were you listening to that may have inspired your songwriting on this new album?

Lots of Dave Friedman produced albums like Spoon’s They Want My Soul The Vaccines’ English Graffiti’The Flaming Lips’ Yoshimi Battles The Pink Robots. We wanted to make something glossy yet visceral.

You’ve said that there was the least time between song inception to completion on the new record than any other release you’ve done. What do you think led to such a smooth sailing songwriting and recording experience?

This was the first time we said ‘let’s make an album’ and that was the starting point. Other times we’ve just collected what we had and put it together on a record. This was a planned experience with an exact outcome.

You’re back playing gigs again (well, at least in Queensland anyway!) – you’ve got a couple of COVID-safe shows coming up in November and December. How does it feel to be performing live again?

We played a gig at The Brightside not long ago and they had just changed the laws so we were playing to a standing audience. The excitement was real, everyone was buzzing at the prospect of things returning to some state of normalcy. We’re very excited to be playing to more people than just each other.

For now, we’re all restricted to stay within our respective States, but once restrictions are lifted, will you plan a national tour for the new single?

We have definite plans to leave QLD as soon as possible.

This year is slowly coming to an end. What would be your parting words to 2020?

I’ve never known one like you and I hope it’s a long time in between.