Interview: Steve Smyth on recording his latest EP Blood in a church, and life in lockdown in Spain

Steve Smyth is arguably one of Australia’s most talented singer-songwriters. These days Steve calls Barcelona home, and with Spain being one of the worst affected by the Covid-19 pandemic,  his lock-down conditions have been more stringent than most.

I caught up with Steve a couple of weeks ago, as he was releasing “Yours Sincerely”, a single off his EP Blood. Blood is released today, and a link to stream or purchase it is at the bottom of this article.

How have you been managing in Spain, it’s obviously been one of the epicentres of the epidemic?

Was it difficult to go back to Spain instead of coming back to Australia?

This is my home – I live here now, for 4 years, with lots of travel. It was really fast, everything was from one day to next, I was travelling through to Austin through the States, and that was closing down. The world was scrambling to a halt. It was in the days I had to make the decision to cancel the Australian tour for now. I could see what was unfolding, and we needed to let go of that and reschedule it for when, we are not sure. We can only take a positive step in the right direction and see where our foot lands when the time comes a lot closer. It was difficult, but there is more holding me here in Spain than to come back.

Congratulations on “Yours Sincerely”, which is the second single off Blood which comes out next month. You’ve described it as an ode to when people used to write letters. 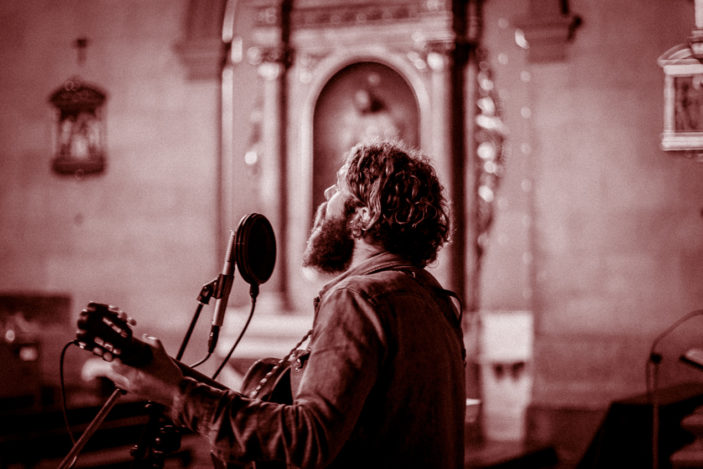 I do understand that. It’s not as though I’m being so insistent that we need to write letters again. I’m just stating that just because it’s shiny and brand-new it doesn’t mean it’s always true. I don’t know if the limited format of 140 characters allows people to be raw and vulnerable. I’m not trying to be archaic and suggest everyone should go and get a penpal over this time.

I wasn’t expecting this to be released during this time of a pandemic. We are seeing more now than ever that people are cutting the fat in what is necessary, emotionally and being able to be a lot more present with each other.

But these are beautiful, emotive songs.

Some days I don’t feel like they are great songs, but it’s what I felt needed to be done and so forth. Just letting the words be on the page, I guess is what I am getting at.

These were recorded in the Church. How did that come about?

If you go on any recording app, or studio, there’s a plugin which says ‘Cathedral’ or ‘large hall’ – I wanted to go straight to the source. It didn’t have anything to do with being religious, or any sense like that but I was surprised with the kindness of the Minister, and I was shocked he gave me permission. We scrambled quickly to grab microphones from studios around Barcelona and we brought it together and it was an intimate moment in such a huge cathedral. The songs were all ready. 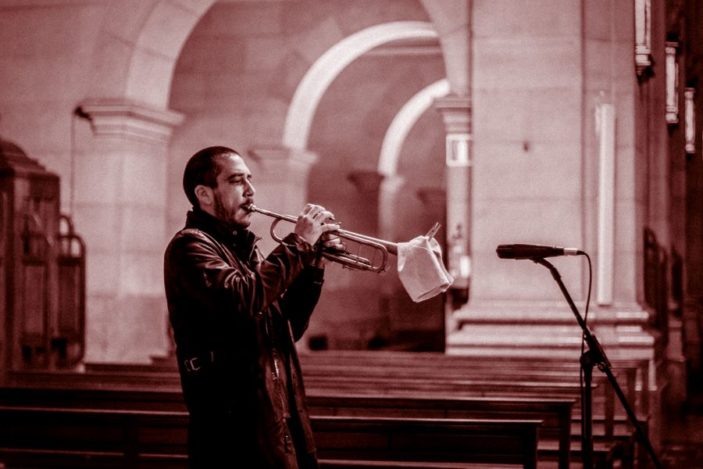 It was a little while ago – everything was clear what needed to be a part of it. It came together really quickly and smoothly. It was intimate in that big setting. It was something I really appreciate now that there was no other way we could have done it apart from recording it live, which brings an honesty to the songs. Take it or leave it, here we are.

How long did the recording take?
We recorded it over 2 ½ days 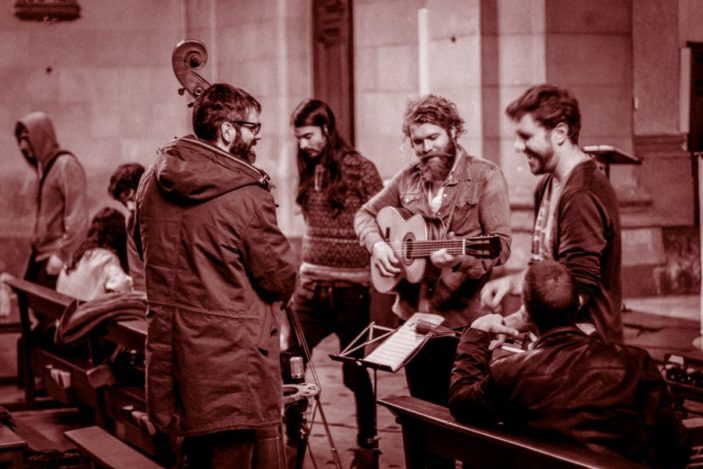 Have you been learning any new skills?

How to deal with anxiety. I’ve been doing some live stuff on social media – head first – getting a little more involved with this – which I’m fucking up some days, or mostly getting it other days. Writing, planting, gardening and chess. I’ve been playing chess with people from all over the world, it was a game I was passionate about when I was a kid. It’s good to revisit it.

There can be a spanner in the works for people at various times through their lives, but with this virus, it’s polarising for every single one of us. It will be interesting to see how we come through this

How have you found the audiences in Spain, compared to playing back in Australia?

Touring through Europe, you are playing where English isn’t their primary language. You can still connect – where the source of music is, beyond the lingual. It’s more 3-d than lingual. In a small town in Spain, the connection can sometimes be greater than a small pub where they are shouting for “Khe Sanh”. It’s a major drawcard and touched me. The maturity to Europe is hard to define, but the trauma it has gone through in wars and the maturity to the solidarity holds strong appeal.

Every day at 8pm, people come to their balconies to applaud the health workers, I feel they are also clapping each other, and acknowledging each other and giving each other a clap. A real strength of solidarity – it’s beautiful to be a part of.

I read Dylan was an early influence – what’s your favourite Bob album?

[…pause] … Fucking fantastic question. Jesus Christ. Yeah, damn, that’s depending on the day, to be honest. Blonde on Blonde is ridiculously amazing, and I really love Self Portrait.

We could make it a double album – Blonde On Blonde on one side, and Self Portrait on the other

..probably Blood on the Tracks

Aaarrgh – you got me – that’s true – it is his all time, it is his all-time. Nothing comes close. Apparently he played the first recording of it to his brother and he told him that he can’t put it out – you’re Bob Dylan, you can’t be this honest. And he went back to the studio and cut the edges off.

There are a little bit of those vibes in terms of the spacing between recording these EP’s, and getting the courage to release them to the world, for better or worse. I wanted to keep a hold of 4 EP’s, which I like to call chapters or a little Novella, that would eventually be a double album. I want it to be slow induced, instead of just dropping one album. Blood is the first of 4.

How did you split the tracks up across the 4 EPs

There are certain stages of grief, that people move through. Records go through a process. Blood, Matches, Fractures, Celebration. Diving into those pools of, and swimming into the bottom of them, and then digging in deep. There are different environments of each. Different places we recorded. This was in the cathedral, and the next one is more rock n roll, more jagged. 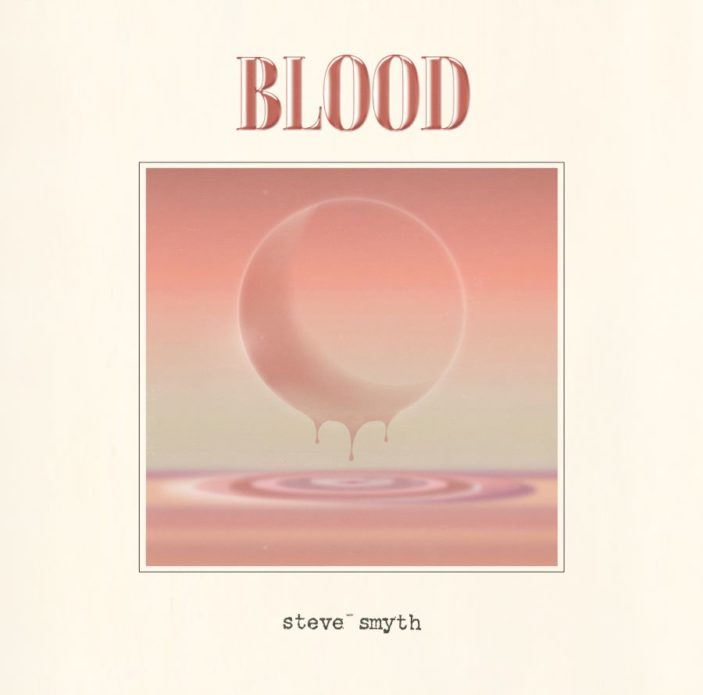 It took a while to pull it all together, without much help. We built a studio to record in. I wrote for orchestras to take a chance on me. Talking to the minister to get permission to record in. Each of these tasks takes a piece of you. It’s been a process in itself.

It’s slow feeding, it’s a degustation. We will see how these months roll out. It’ll be good to see where it lands.

You can check out the video for “Gone for Good”, from the EP Blood which has been released today. It is classic Steve Smyth, heartbreakingly honest, his voice moving effortlessly between gravel and the upper registers. The instrumentation is skillfully uncomplicated, accompanied by a brass section that is totally in sync with the mood of the song. They have captured the reverence of performing live in the church, where the EP was recorded.

You can stream Blood HERE, and purchase it HERE

Keep an eye out for the remaining three chapters in this quartet of EP’s – Matches, Fractures and Celebration.