Interview: PLANET’s Matty Took on Information Overload, moving to the UK and recording at AIM 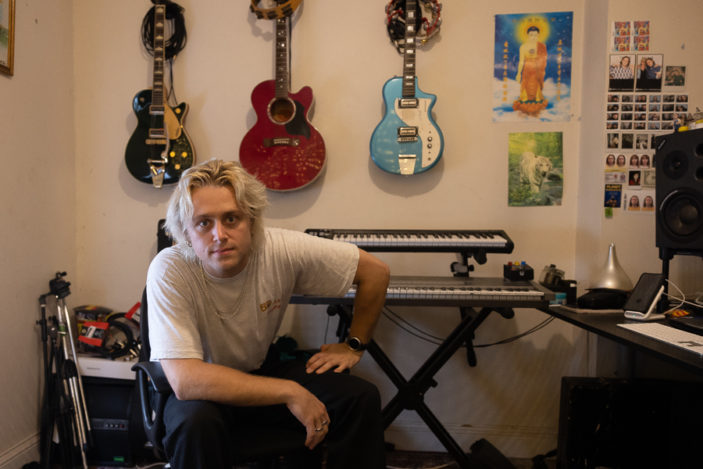 Sydney quartet PLANET have just released their long-awaited debut album, Information Overload. The album was produced by legendary engineer and producer Adrian Bushby (New Order, Placebo, U2, Spice Girls) and has a large guitar-driven indie sound. With nostalgic brit-pop feels to it, it’s a superb debut from the band.

I caught up with Matty Took, lead singer, in his studio to have a chat about recording the album, working with Adrian Bushby and how a chance meeting late at night led them to utilizing some high-end recording gear at the Australian Institute of Music (AIM) in Sydney. The band was just about to embark on a launch tour for the album, so we wandered the streets near his studio to take some photos, finishing up at The Lansdowne, where the band has been rehearsing.

Once the Australian tour is done and dusted, the band will be basing themselves in the UK, where they have a substantial following.  I expect Information Overload to take them to the next level over there, and there’s no doubt they will be playing larger venues in Australia on their return.

Hey man, congrats on the album,

We’re excited to get it out. It’s been chilling there for a while. We’ve had it mixed and mastered and it’s ready to go.

It’s a big sound, one that’s destined for a large room. You must be looking forward to playing it live.

It will be good.  We haven’t played a live show in ages. We kick off in Melbourne this Friday, then Brisbane, then Sydney a couple of weeks later. We’re looking forward to it.

How are rehearsals going?

Yeah – good – we had one last night, and tonight as well. A full production rehearsal. Three or four new songs, it’s so good to get them in the set.

The legendary Adrian Bushby produced the album. How did that come about?

I think he actually came to us! He said he really wanted to work with us. Which was pretty cool. Such an awesome and well-known producer coming to us was pretty crazy. That got teed up, then an email chain and so on. We were going to record it with him in London but obviously, we couldn’t get over there, so we recorded in bits and pieces in this room and at AIM.

It’s at Surry Hills, and we got to sneak in there and record which was awesome. We did the drums at Parliament Studio with Lachlan Mitchell which was cool.

Did you get any surprises when you got it back?

There was a lot more clarity. We are pretty hands-on when it comes to recording, we pretty much do it all ourselves, except for drums. For guitars and acoustic guitars we put it into our own sessions, and do all that so you do a rough mix, and think, yeah this sounds pretty cool. We’d send it over to him and it comes back and everything’s clearer, wider and in a bigger spectrum. Yeah, it’s pretty next level.

It’s very different to our first one. I feel like this is a bit poppier, a bit cleaner, which I’m really into, the direction we are leaning into.

Yeh – he also worked with New Order and Foo Fighters. He did Echoes, Silence, Patience & Grace

You’ve got a sound that resonates, in the UK. You guys are making some serious headwinds there.

Yeah, cheers man. That’s the vibe. Their rock music is going really really big. Australia is too, as well as guitar music. Definitely, the UK is popping off. I feel like there’s that affiliation over there. Guitar music is such a thing.

and you have a bit of a brit-pop feel to your music which helps ….

Yeah, it’s that melodic, rocky stuff. With a hint of pop and overdriven guitars. We’re going to head over there in late April.

I know!-  I’ve got tics to see you in Liverpool in May

Haha – that’s sick. I think we’re going to move to Liverpool in May, and base ourselves around there for a bit. Do some tours and record album #2 there. It’s going to be mad. We’ve got that lined up now. Do different festivals and play as much as possible.

I like the North. I think it’s a cool vibe. And based around Liverpool, everything is pretty near. London’s four hours, Glasgow four hours or so.

What are the places you are really keen on playing?

Scotland is always great. Glasgow is mad – they are always ready to go.

I want to play some newer places that we haven’t played before. Newcastle, and down south, Brighton and Southampton, Plymouth as well. I’m keen to play these coastal towns as well that don’t get as much attention. I feel if we are based over there we don’t need to do a major run, we can target smaller towns and get their vibe. 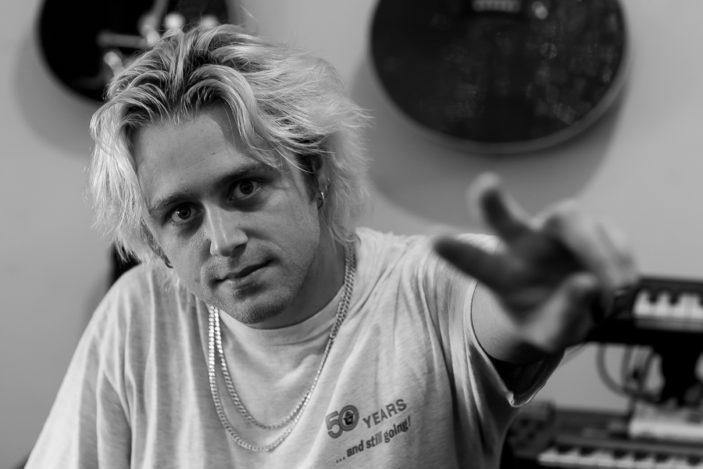 What songs from the album are you looking forward to playing most?

“Hard to Come By” – it’s the second and a really chill banger. We have some program tracks that are getting programmed. We’ll have synths and arpeggios that are going to come in. Because we are a 4-piece, we can’t do all these things at the same time. It’s going to be cool. It’s going to sound really fat.

And another song called “Pulse”, which is a slow piano ballad that Tom is going to play keys for, that’s going to be nice. We haven’t done that before.

“Ship Won’t Change” – I love playing that – it’s going to be a nice acoustic thing. We’re going to get the girls from Clews to do harmonies

Killer – they are great hey

Yeah – they are so good. There’s something about siblings – the harmonies just ring

Are you pumped about touring again?

Yeah – so excited – it feels like there’s been this thing missing in my life in the last year. You can record as much as you want, and sit on the computer, but without playing music live, it just loses the soul a bit. It’s going to be great to get back on the wagon and do some shows. It’s been such a long time coming.

So, it was fun to record at AIM with all their high-tech gear? There’s a bit of a story I believe

We met this guy at a party, on a bit of a bender, and then we got talking, and he told us he worked at AIM. He was the microphone in-house guy, so he said – yeah, come in, no-one’s using it.

So we went in, there was no one there, it was completely dead, which was crazy. There’s so much gear, grand pianos, microphones. We went in and did acoustics, bass, grand piano. He let me borrow some high-end mikes.

They have this big SSL desk which is worth half a million dollars or so!

It was different from when you go into a normal studio where you are always looking at the clock. We were able to chill and try different things. It felt a bit more flexible, you could do random stuff and not be time conscious.

Did you have trouble whittling down the songs for the album?

Yeah – a little bit. There was some push and pull. Originally we were only thinking of 10 songs. We have so many new songs but we also wanted to give love to some of the older songs as well. We wanted them to shine on the album, and give them a PR push that we hadn’t done before. We had to get past the mindset of ‘we’re re-releasing songs but having it as a snapshot of where we are at.

We started off with fifteen new songs. Then we got that down to twelve. I wanted at least three old songs – so I picked “You Just a Little More”, “Aching Dream”, and “Northern Skyline”. We ended up getting them remixed and remastered by Adrian, which gave them so much clarity and so much air.

So in the end it was nine new songs and three old songs.

You guys are supporting the OG Wiggles!

Yeah – that’s the 24th April at Qudos – which will be pretty crazy. I’ve never played a stadium before.

Not even when you supported Liam Gallagher when he was out?

It will be a good laugh. And we get to play some upbeat songs in front of a load of new people

You’ve got a big stage to throw some big moves!

(Laughs) – yeah, I’ll need to get some of them going

Then we fly out a few days later to the UK. We are doing a couple of showcases before we kick off the UK tour!