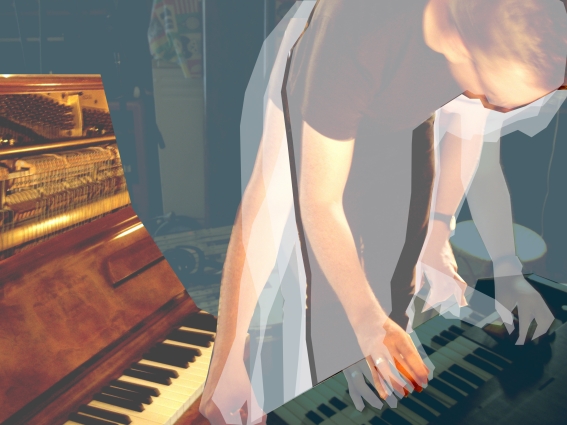 Over the last few years, Nick Huggins has been literally working on nothing else except music. He has had a hand in many great albums over the past years, from Laura Imbruglia to Otouto, many of which you can find on the Two Bright Lakes label. He has decided to take some time out to create some music of his own, however, which has resulted in an interesting project called Five Lights which encompasses three elements: the album, a book, and another set of instrumental guitar songs. I caught up with the man himself to learn more…

What was the most enjoyable thing in making this album?

I think the most enjoyable thing was having the time to make it. Having it coming out now is also exciting as well. The really good bit was to working with other people as opposed to my own. It was wonderful to just have time to just do this project mostly in my own space. Usually working with others is very social and collaborative, so this was just the opposite of that process.

It kind of went into a thing where after I have not done anything of my own, I tried to figure out why that was. I just figured that everybody around just books time around me and gets time off their own work. I just needed to do that myself, so I took two and a half months off and moved my studio to the beach and I had a great old time.

That gets me to question of how do you make time for generally with all the other artists that you have worked with. What’s your motivation in working with so many different projects?

I generally think I get over excited about the amount of good music there is in Melbourne. I feel lucky to work on a lot of it which just I think is amazing. Finding that time to do all the projects that I like is often hard, but from two or three years of solely working with other people, making my time to do my own thing is a good balance.

Now that this album is released I’m ready to move onto other things and work with other awesome new bands on their things. I have a lot of energy now for them. The balance is reset, which is nice.

And you’ve worked with a lot of people who have evoked different things like Otouto, Hello Satellites, Khancoban. These bands have their own distinct differences. How do you get into the mindset of how these bands work as opposed to how you work as a musician?

I guess half the challenge is a social one. Relating to people and making the studio space a place that is comfortable. It should make them happy to be there. Getting inside their creative viewpoint takes quite a while, so generally I find when you get to know people outside of the music sphere, and they perform well.

By the end of the first record you do with them, you become close friends. You feel like the creative stuff is unspoken and assumed. Record making takes a lot of detail and time. So while that is happening it’s a good time to develop relationships and friendships with people.

One of my favourite things about the last year is that I’ve started to do the second records with bands that I’ve originally worked with on their second record. You get an idea of what they did off the bat and you build further on those creative understandings of what they want. I’m working with a great band at the moment called Manny Fox Hangman’s Club who I’ve worked now for a third time. It’s a wonderful feeling cause we’re all friends and we all have an assumed understanding of what we’re up to at different points in musical careers. It’s creatively alive because of that.

The first track ‘Iceberg’ from the album Five Lights sounds quite soundscaped compared to your previous album (Shipwreck, released on Two Bright Lakes) from a few years ago. Did you want to go down this route for the album?

In some ways it definitely is a quiter album. It has more bass and not a lot of uptempo tracks. In terms of it being a little ambient and down tempo – I think it’s a by-product of making detail focused, quiet music. It does lend itself to that ambient soundscaped feeling, yeah.

I’m intrigued by some of the percussion and instruments you used. I read that you home made some of your own electronics for this album?

Yeah, just some 9-volt circuits with simple square wave generators and a little sequencer. They’re very basic but I’m interested in getting, kind of elemental. If everybody’s laptop has authentic versions of classic synths as presets – which is a great thing – I would want to go back to the elemental stage. With that early electronic sine wave, square wave, things-going-wrong-with-it kind of sound, I wanted it to be a curious kind of work, in the sense of how those instruments were built. The sounds also have a bit of direct-ness about them which I enjoy as well.

Did any of those instruments take long for you to make?

Yeah, it an endless thing. I have a lot of unfinished ones. I’ve been working on them for a few years. Luckily I have electrocuted myself on them, which is good!

On that track, ‘Iceberg’, there’s an interesting sound at the beginning of the track which sounds like a marine sort of sound. Something like a whale song or something? Could you explain what that sound was?

Almost all the sounds on that track are from a piano I got from a garage sale. I sampled and chopped it up, put it on a tape machine. It was this 80 year old French piano that has this wonky, out-of-tune feel to it. The track is made up of samples of that piano treated in different ways. I did things like pitching it down, sequenced, run it through tape again, all that kind of thing. If I am thinking of the sound that you’re talking about, it’s from that piano!

It goes a little bit warped. In making the album, I was away on my own a lot in Winter. I got away from the Internet. I think it was some sort of cabin fever going on. So it was just a little loss of perspective, which is nice actually.

Do you think the fact that the ease of how a sound can be manipulated, is a good or a bad thing for music nowadays?

It’s the best thing in the world that people’s iPhone can have music programs on it for a dollar. Music sequencing software comes free with your new computer nowadays too. I think a lot of those technical limitations that were a part of music making up until the last ten years is gone now. It’s wonderful.

It used to be that you could delineate music genres depending on what instruments you’re using, and one instrument was more valued than another – all that kind of thing. Now it’s just a free for all. People can make music however they like, and I don’t think the general music listening public judge it by process. They judge it by the end result.

You can learn more about it here: http://www.twobrightlakes.com/fivelights/FIVE_LIGHTS.html