We caught up with Northern-beaches indie-rockers Marvell during the week, to talk about their latest release, “19 Homes” and how life has affected them during the current crisis. As you’ll see, they have positively thrived during these times.

The band was formed in 2016, with the founding members being Tom and Max Marvell. No prizes for guessing where the band name came from. I caught up with Max and bass-player Dylan Mitchell.

Congratulations on your new single, “19 Homes”. It’s instantly accessible, rocky and with a great tune. How did that come about?
M: Yeah, we are really stoked with it. It was one of those songs which came to me in about 20 seconds. I was feeling so much frustration trying to find somewhere to live, and got to band practice, and had that lick in my head, and everyone started playing along. The lyrics just fell out. It was very natural, it was one of those moments. We didn’t play it again until we went into the studio and recorded it. It just came out.

What was working with Jan Skubiszewski (John Butler, Dan Sultan)  like?
M: Jan moved out to Evermores old property near Gisborne, the best place in the world.
We just clicked with Jan – it felt like we were working with a mate – he tells you how it is. It’s a relationship which is solid, and we want to keep working with him.

I believe the trip wasn’t with incident though?
M: We had only been there a couple of days into a 3-week trip. Tom has a compound cross-bow, which is great fun but potentially lethal.
I’m on the piano trying to come up with something and the boys are out the back shooting arrows, and having a few beers. One of the arrows snaps and gets a fracture on the side. Jesse Gaupset (guitarist) didn’t realise and loads it up. He fires off this arrow – the front of the arrow just did a swan dive and everyone laughed, including Jesse. He didn’t realise that the rest of the arrow had just gone straight through his hand. The hand ballooned and poured with blood.
The boys found Jan, and he organised an ambulance and Jan then had surgery. A couple of days in hospital then he heads straight back to the studio. The first thing he did was run from the car to the guitar and played some riffs on his guitar. It was a lucky escape.

The video looked fun to make. Was it as much fun as it looked?
M: Yeah – it was fun but it was also hard work – there were a lot of people on set, a lot of stop, go, start. They were a  great bunch of people to work with and so much respect for the guys who create these. The film industry is hard work.
D: We offered people beer and pizza to help. They all came.

How did the current band lineup come about? I first caught you guys about 5 years ago, and it was somewhat different.
M: Yeah, unfortunately our drummer BJ, was diagnosed with cancer. This threw us in a spin for a couple of years. There came the point where it was best for his health that he left the band, and at the same time our bass player, Harry also left.
D: Theo Henry is one of the best drummers on the Northern Beaches, and his style especially suits this band. The only problem was that he was in a band with me. I told him it was cool to join Marvell, and I then hassled Max so that I could get the gig with Marvell. He relented and the rest is history.

How have you kept busy during iso
D: We did a live set at Factory Studios at Mona Vale. It was one of the best things we could have done – it kept us productive – and it was high quality.

M: I’ve been doing a lot of other creative outlets, working on my art in particular. Haven’t been writing that much music – as most of my ideas come when my life is chaotic. I also managed to finally assemble a great team around us.
I have spent so much time writing emails to record labels, agents, managers in the past, trying to get some momentum in the industry. One day I was scrolling through my Facebook friends, and found one, Lachie Jones,  and realised he was now managing some artists, and pretty cool ones at that. Batts is one of them. I sent him a message saying ‘hi, we’ve got a great band – do you have an email I can send you some samples to?  If you don’t like us, no worries.  Straight up – he replied yep, like your stuff, and he has been a breath of fresh air.

Since then, we’ve got an awesome booking agent, in Raida Artists and Vienna Bradley. And he put us in touch with Sammie Anschau at Beehive PR to help with that side of things.

It feels like we’ve just clicked during lock-down, scoring an awesome manager and booking agent and PR team.

Are there any memorable gigs which you look back fondly on?
D: We did a gig at Canberra in a small bar, probably 40 or 50 people – pretty much we knew that they all would come to the next gig again.  It doesn’t matter about the size of the venue.
M: Anywhere that we connect – can be 10 people or 5000 people. Where I don’t feel like I’m trying to impress the crowd – where they just totally connect with you. That can be the most rewarding.
D: I did play at the Opera House – that was pretty good – we were supporting my Dad’s band (Moving Pictures) – that was nice!
M: The Lansdowne is fun – the guys that run it are awesome. Big cuddly teddy bears with tattoos 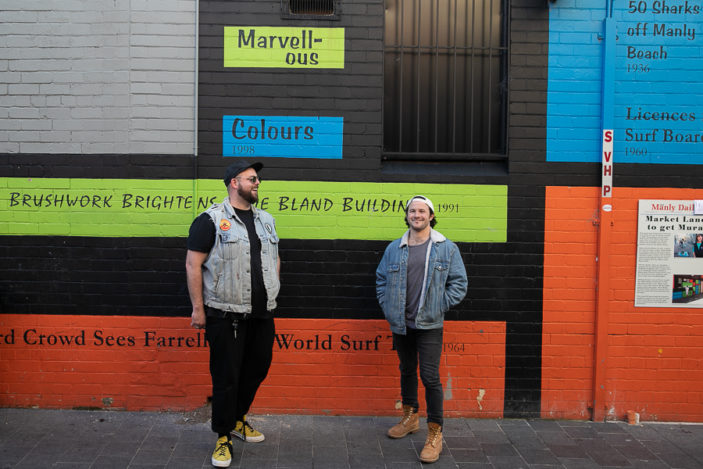 Have you been listening to much other music recently?
M: Yes – not a lot of new music – but I find it easier to relate to older music. I’ve been listening to loads of Allen Stone from Seattle, Paul Simon, Van Morrison, Hootie and the Blowfish
I find that old music is more believable. I love the story-telling of those old artists, they kept the mystery in their lyrics, which made it easier to relate to your own story.
One day we saw Mental As Anything were playing in the beer garden at The Steyne, and ended up chatting to them. They asked us if we wanted to play support. We love that band, so it was yes obviously. For the whole set, Greedy Smith stood side of stage and didn’t move an inch. Afterwards, he said “I absolutely love your set, all of your songs are really relatable, keep going” – it was the greatest musical compliment I’ve ever had. He signed a poster for me, and I’ve got it in my music room. It’s a constant reminder to me to make music in a way that resonates with people.

D: I’ve been listening to a bunch of old and new stuff. The Cure, Boy and Bear, Kings of Leon. The Vanns new album, the new Spacey Jane album – great people and musicians.
M: I’m totally into Paul Simon’s Graceland. It’s a masterpiece.

Despite the disruption to live music, it sounds you guys have made the most of the downtime.
D: Absolutely, we’ve got a great team now – you don’t realise that you’ve needed it until you get it
M: For sure, Covid-19 hit us, but for the band it has been a new start. It feels like things are starting to happen for us. It feels like it’s the right time. Even though it’s bad for gigs, we’ve got a new manager, booking agent, PR team, and hanging out more as a band. We are focusing on where we want to go and forming great relationships.