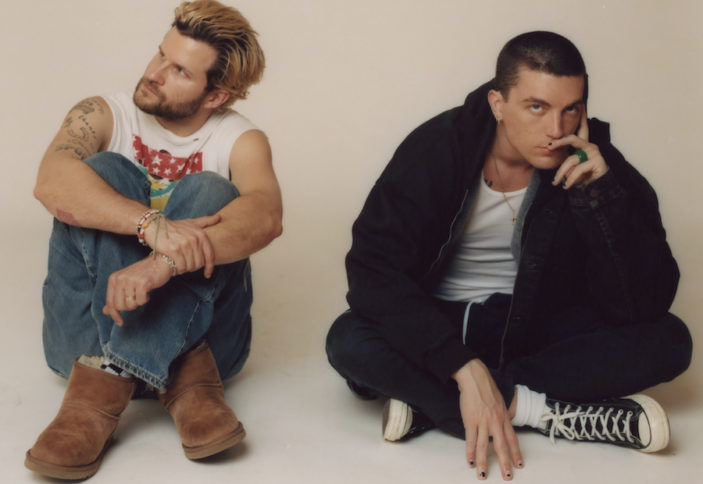 LANY are currently on Australian shores, making their way around the country as they soundtrack our heartaches and hangups in the largest venues they’ve played in Oz yet.

Paul Klein and Jake Goss built an international fanbase with their 2017 self-titled album, and followed it up with Malibu Nights (you can read our past chat here) which detailed frontman, songwriter, lyricist and producer Paul’s breakup at the time.

His relatable lyricism has attracted forces of fans who count LANY as a shoulder to cry on in their toughest moments. The band’s most recent album gg bb xx, however, is a reminder to hold onto the moments of love and life – a celebratory upswing that’ll undoubtably provide a sonic journey as LANY incorporates the old with the new across their tour.

I caught up with Paul via email to get the scoop on touring Australia and whether he’s put living in the moment into practice on the road.

Paul Klein! Paint us a picture of where you are right now.

Right now, I am sitting backstage at the Hordern Pavillion. We play in 90 mins!

You’re currently travelling around Australia for your biggest AU/NZ tour yet – what’s your favourite part about visiting Down Under in the past?

The breakfast in Aus is unrivalled… Sourdough toast, poached eggs, and bacon. The people here are really nice, too.

Your album gg bb xx is centred on the idea of savouring fleeting moments. Do you take stock of milestone moments on the road, or does it roll into a blur?

Most of the time, no matter how hard I try, it all feels like a blur. However, I have this pretty bizarre ability to look back at pictures and know which city we were playing just by the outfit I was wearing.

What’s your personal practice for reflecting on successes?

I need to get better at this. I’m ,for sure, our harshest critic, and no one hates me more than me haha. But, ultimately, we are so blessed to do this for a living. And that’s our greatest achievement so far.

You’ve teased that new music will work its way into your live shows – what can you tell us about this next era for LANY?

We’re finally getting back to some sense of normal so this year will be full of shows while also working on a new album. We have an unreleased song called “congrats” that we’re heavily considering working into our live set. We’ve never played unreleased songs live before so that could be kinda cool!

As we know, Les Priest left the band earlier this year. Has his departure changed the way you approach creating your music or is the process much the same as a duo?

We love Les, and we miss him already. But, his departure has been almost empowering for Jake and I. We’ve both risen to the occasion of carrying this band on our shoulders, and this next album we’re making already feels so special. We lost a band member, but we sound like a band more than ever.

As a mouthpiece for your fans, I have to ask the question about a picture that sent some fandoms into a frenzy: what were the fruits of your meet up with Zack Tabudlo? Anything you’re able to share (pretty please!)?

Zack was in LA and came by the studio to say hello! We got to hang with him for a bit and listen to some unreleased songs of his! He was super nice, and we’re stoked for him.

Thank you for your time and it’s great to have you back on our shores!