Interview: Jake Taylor of In Hearts Wake chats about the doco Green is the New Black 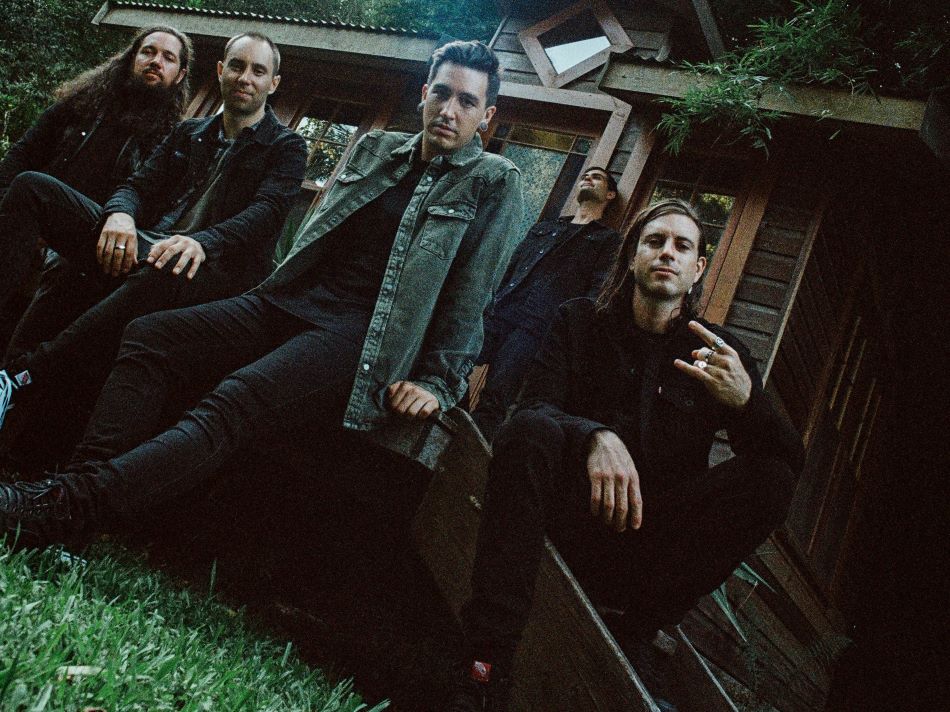 In the middle of their first Australian tour in several years, we sat down with In Hearts Wake frontman Jake Taylor to chat about the band’s new feature-length documentary Green Is The New Black. It holds a mirror up to the music industry and its relationship to the environment.

The movie chronicles the making of their 2020 album Kaliyuga and the journey to become a certified Carbon Neutral Organisation, the only known band to have this certification. Currently being screened at festivals, the movie is due for general release in October.

How has the tour been going so far?

It’s going really well, touching the areas that we get to visit the least. E.g., NT, Far North Queensland and WA. It was really good to kinda go to the outer brinks first and we just realised there were still people that really care. After the last four years of not knowing what’s been going on. That hangover of the pandemic and all that, kinda like wow still a world up here where people go crazy. I love it. It was nice to reconnect with these people.

Looking through your Instagram, you manage to find a few nice little spots around the country to go swimming and stuff like that.

I guess when you made the album Kaliyuga, that was before the pandemic so any plans you had back then must have just been thrown in disarray.

That’s correct, they were. We had a world tour planned for Kaliyuga; some great tours booked but that wasn’t meant to be. It allowed us suddenly a huge window vacancy to go dive deep and make a documentary.

At what point did you say to yourself OK let’s document this; let’s make a movie?

Well, we were already documenting before as a matter of course and realising that the stuff that we were trying to do, in a way hadn’t been done yet. We wanted it for our own records to see what could be done and perhaps share that knowledge. It could have been in the form of a 10-minute YouTube doco or just some piece of content that we could communicate those things. Once we were full on into the pandemic it was really like we get to dive deeper on this and really be able to give up time to make this. I think with the pandemic giving us a huge story point of what we went through as a band and actually like well there is a huge story here.

I looked up the whole concept of Kaliyuga and the whole conflict age of quarrel and everything it feels like that’s what we’re in now.

One hundred per cent yeah, I mean, and we named it. Well, the record named itself. It’s an ancient Hindu prophecy if you would, but it wasn’t saying that it’s coming, it was saying that we were in it. So, we didn’t name it thinking that it was coming, I guess you could say that judging that the time we’re in it would go a few shades darker.

That’s a dark age you know we were definitely seeing like in America at least, that era of politics the way the division was swinging. We did have the tail end of bushfires – there are things going on. We didn’t know how much it would light up, but it really has lit up, hasn’t it?

It was scary for us having written something like that, that felt so urgent. Whilst we put a lot of thought into it, for the most part, it really flowed. Then to have all the events that kind of transpired, it was like, you know, we don’t want this. These songs are meant to be warnings of a thing that we want to avoid rather than what you’re heading towards. It’s scary ’cause you don’t really know how deep it all goes.

On being carbon neutral, one thing that interested me is using leaves instead of confetti; things like that; how did you come up with some of the ideas you had to make carbon neutral?

So, to be clear, being a Carbon Neutral Organisation doesn’t dictate that you have to use one type of confetti over the other. It’s best steps towards better practises. We just recognised that you can’t be up on a podium saying one thing and what’s happening behind you is so contradictory. That was kind of our realisation. It happens in the documentary. You can see these moments either mirrored back to us or we realised. Confetti was kind of a Pandora’s box moment beyond the CO2 jets. When you see these CO2 columns going to the atmosphere, and we were doing those all the time and admittedly saying like our planets in a certain state. The visualisation of those almost looks like a power plant or something you know or big steam funnels of the Titanic.

We still needed the confetti and then they were folded and just dyed confetti’s and you see those scattered in the environment and going into the Parklands. There’s a conversation we have in the doco that’s live and it’s literally like what if we use leaves that are in the shape of confetti. I’m like, why don’t we just use leaves? Our bass player last weekend for one of the shows on this tour, he did it with his three-month-old boy and they were collecting bags and bags of leaves.

I think having kids probably reinforces the world future we have, more so.

I think you’re right, but I think we’re still young enough that we’re going to face it in our generation. Kids or no kids, but probably it’ll be reinforcing it for those guys. I can’t speak for myself personally, but two of our members have just had kids in the pandemic.

What about the reception? What sort of reception have you got with the movies being played at BIGSOUND and places like that?

We’re getting such good feedback. I don’t think the public awareness is there yet. Like it’s barely through these places, but that word of mouth is so small but it’s potent. We haven’t released to the public yet, but that’s where we can really see those ripples go outwards. Our desire from the start was to have it be adopted by film festivals and industry conferences such as BIGSOUND; we’ve had it played at the forum; Portland Film Festival picked it up and Melbourne Dock Film Festival had it. Basically, eight or so festivals picked it up, which is great. So, we had it beamed not just to our fans, and the feedback was sometimes with tears in their eyes, like legit. It’s not just a factual doco, it’s a human journey that this shit goes down. People have been really moved. Particularly some of the middle aged to older people have said that this was wanting in the 70s and 80s. Comments like finally it’s happening now. I think it’s gonna have an organic way of reaching people and we’re off to a great start.

As far as becoming carbon neutral and offsetting, how many changes did you have to make or were you already doing some? Is it difficult but a price you want to pay?

Becoming a Carbon Neutral Organisation, it doesn’t dictate that you have to do such and such, at least in the initial stages. You just have to quantify that by collecting all of your data and then offset all of that. So that’s what we did. The next steps from there are not to say hey we can grow bigger and bolder and make more damage, offset it, and get away with it. It’s making steps to look at those areas that you emitted perhaps larger than the others and come up with creative ways of reducing or at least you know explaining why those have grown or gotten smaller. It’s the process of accountability.

We’re touring more this year because we’re out of the pandemic. So, what are we doing? Not because anyone is telling us to do so, we’re just driving a route in which we get smarter with our routing. We’re not using power on stage, we’re taking solar batteries that we charge at every venue, outside in the sun or in a hotel or at a waterfall. Then we use that to power all our lights. That’s not because we are being told to, it’s just getting creative in coming up with ways to be more accountable. Now to your question, this can be challenging because it’s new ground so there’s no set of rules.

It’s clear that you guys are creative in getting your message across. You’re not just singing, you’ve got the movie, you’ve got the website. I think people will accept a message more if they are invested in it rather than just being told.

This is a big journey. I think leading by example if you choose to lead, but it’s not anyone’s job to point the finger. That’s the cancel culture we’re kind of in and I think that’s what’s making things very problematic. We can offer examples and things, but I don’t expect anyone to follow. I expect these bands just want to change. I would hope that in their humanity at some point they realise that things need to change.

It’s a tough one as it’s not being the easiest time for many people in bands. I’d like to think they’re doing their best. When it comes to ignorance if they choose to turn a blind eye, that sort of stuff, like this is an invitation I’m thinking that’s the next step.

I think setting an example of showing that it is possible gives people hope or think well if they can do it maybe we can try something.

Showing that it can be done and that you’re not punished for doing it. Also in the capitalistic way, which is what, let’s be honest, a lot of labels and bottom-line with people that have kids. We need to be mindful, but I also need to make money so yeah that’s a fine balance.

Well, it sounds like you guys have captured it and managed it. It’s fascinating to be able to put that into a movie and show your process and things like that. You know you’re not just doing it, but you’re capturing it as well and then sharing that.

The important part is that it shows the humanity, the challenges, successes, the wins and that it can be done. That’s often a missing component and especially with cancel culture. Like how we did it but not share this because it’s not like we wholly owned this thing or it’s I don’t wanna be found out for getting something wrong. Or people just go no it’s too hard, so I won’t do it at all. It has been challenging to document something to not look like “look at good we are”.

We’re willing to open ourselves up as a case study. This is shit we’ve got wrong; this is what we got right. This journey can be a win and that’s the thing that we couldn’t have predicted. I see the ripples of conversation about the doco as the power of art and the ability to sort of transcend politics.

Tickets available now at inheartswake.com
Green Is The New Black is available for streaming in Australia & New Zealand from 20 October 2022 via iTunes and DocPlay. Pre-order the film now