Interview: Jaguar Jonze talks about her first North American tour ahead of The New Colossus & SXSW

Fresh from participating in Eurovision: Australia Decides, we caught up with Brisbane-based artist Jaguar Jonze, as well as the three guys in her band – Joe, Jacob and Aidan – while they were on tour in Melbourne. Jaguar Jonze is one of the acts playing our special showcase at The New Colossus Festival in New York City next month, alongside Tia Gostelow, Wolfjay, Knife Wife, Safer, Singapore outfit The Pinholes and more! So we chatted about that upcoming show, the accompanying North American tour and everything else happening in the world of Jaguar Jonze…

What’s the origin story of Jaguar Jonze – and you’re based in Brisbane, yeah?

Hmmm. I hardly even know where to say it’s based anymore as we all don’t really sit in one place but Brisbane is our home.

I met Joe in primary school at one of those underage disco things that you begged your parents to go to.

I met Jacob because we needed a fill-in drummer for an Ocean Alley gig and then he was just so good we had to keep him.

I met Aidan because *LOLOLOLOLOLOL* he was photographing for *drumroll* The AU Review at one of my earlier projects’ tiny acoustic shows back in 2014 *HAHA*. So thank you guys.

Brisbane is actually such a great place of live music. Despite it being one of the smaller cities of Australia, it’s a great community of people supporting each other and people always heading out to watch live music.

What excites you most about coming to / getting play in New York City?

Gosh. I didn’t even think that would be a thing we’d be doing this year, and it came up all of a sudden and all worked out. I’ve been to New York once and it was about 8 years ago, so I’m looking forward to exploring as an adult and as a musician! We’re all keen to dig into some food though hey. If our bellies are happy, we’ll play the best gig *haha*. We’ve been getting the best suggestions from fans and we’re excited to go belly exploring.

Always a terrible question to ask to the person who created the music, but how would you best describe the music to someone who hasn’t heard it before?

I’m gonna steal triple j Unearthed’s quote – “Ever wondered how you can visit an old Western saloon, a neon-lit Japanese izakaya and a sweaty indie rock gig in Brisbane in the span of ten minutes?”

What’s your latest single, and what else is coming up?

My latest single is ‘Rabbit Hole’ fresh off Eurovision: Australia Decides 2020…. it’ll be leading into an EP quite shortly after my US trip too so I can’t wait. I’m really proud of the music video I made alongside Director Ribal Hosn, we built that set in his living room and just tested what we could do with one person in one small space.

Check it out here:

Or listen to it on all the other streaming services.

Tell me more about what you’ve got planned in the US?

Alongside SXSW, we will also be doing a US tour.. I cannot wait to do our first shows here in North America and hopefully come back more often. It’s a dream of mine to explore the US more thoroughly, and to be able to road trip around playing shows, so this trip is a bit of a taste test. AHHHHHHHHH I’m so exciteddddddddddd!

Check out all the dates here: 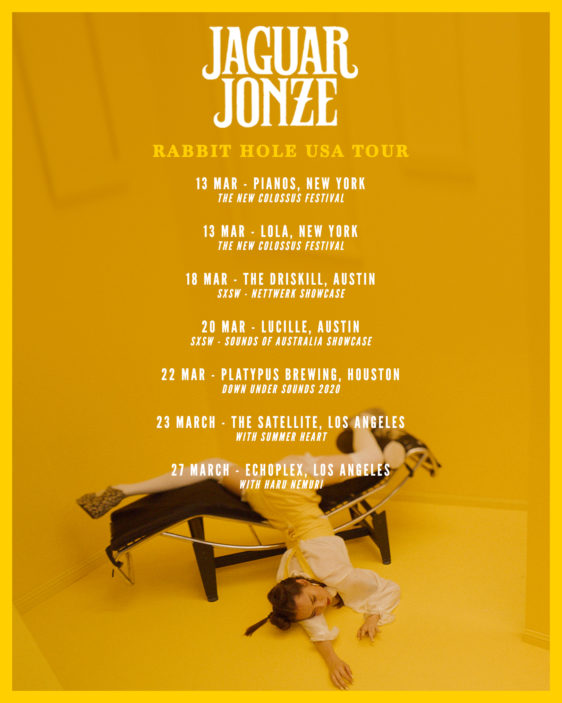 Who else should punters check out at The New Colossus?

We’re supporting Summer Heart in LA and so I’m gonna say to check him out as I’ve been digging into his tunes lately.

For more about Jaguar Jonze, head to her Official Facebook Page.