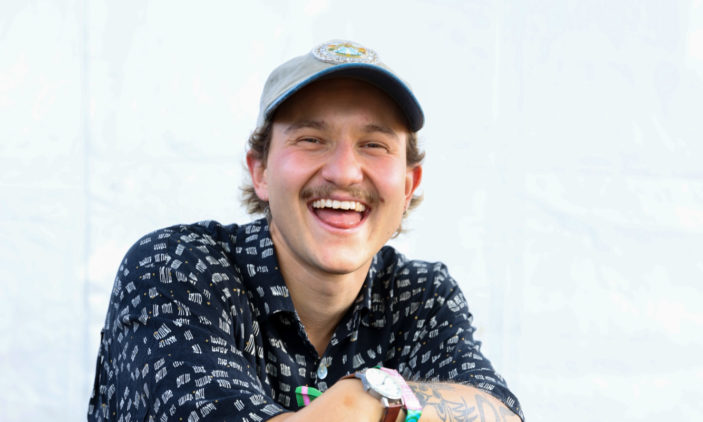 Izzy Heltai is the kind of person you just want to give a hug and if you spend more than 30 seconds with him, it seems like you most likely are going to get one. It took one listen of “Day Plan” from his EP Day Plan (5 Songs Written 4 the End of the World) to fall in love with Izzy’s voice, style, and lyrics, and the singer-songwriter from a suburb of Boston, Massachusetts was gracious enough to sit down with us at Austin City Limits, and now he has two more fans.

Heltai has just come off a US Tour opening up for Bear’s Den when we got to catch up with him before his Saturday ACL set. We were able to talk about his first time at the festival, his expectations of his set, and let him know that he has quite the following in Australia.

It’s Friday and mid-afternoon at ACL and you are here even though you don’t play until tomorrow. Is that something you love to do, to catch who’s playing? Are you planning on seeing other acts and just living it up in Austin?

As a songwriter you begin to make this world your profession. It’s a hard job to do. And it’s a hard job to get any sort of place where people are paying attention to you. A big part of it is travel, the lack of sleep, and the long drives with the supporting act tours. A big part of it is the people I get to meet and just the experiences and places I get to be. So if we have the time to do it, I’m fully going to take advantage of now. I just get to be hanging out at this festival with no responsibilities today. That’s rad. And even if I’m not a super big festival person, I still have the opportunity to just be here. So why not explore a new context? I’ve never been to this festival and I’m relatively new to it at this level so maybe I’m just excited now and it’ll change, but for now I’m just happy to be hanging out anywhere.

This is cool. I mean, growing up I didn’t think I’d ever be on the other side of things like this. Obviously everyone dreams, but it’s like, “Who would I be to ever assume that things would start picking up?”

So being so versed in lyrics and songwriting, that style, when you come play a festival of this size, do you view it as a different challenge, is it more intimidating or just another show?

For me, I think as a musician, it’s the moments… Especially as an up and coming artist, not every moment is going to be the most glamorous moment. So you get thrust into it. There are the standouts, the best shows you have, but then all along that way there are maybe some weirder ones.

I’ve learned to enjoy taking everything as just as it is. And I don’t try to compete with anything anymore. I just try to control what I can control, which is how I show up in a space and how I play. I’m not here to force anyone to receive my music in any sort of way, regardless of what the context is. And it’s like, “I’m going to put out my best foot and you are going to take it in however you want.”

I was playing solo for a long time so my early years of playing was a lot of feeling in competition with bigger sounds and especially putting two hour cover gigs at breweries where everyone’s really talking over you. As terrible as it was, it was definitely a practice of just letting go. And from those, if there was one person listening that gave a shit about my songs, I was happy.

That’s a beautiful way of looking at it. You seem to be more process oriented than results. That must make your career so far more enjoyable than striving for something too big too soon.

As a queer person, I’ve never been afforded the privilege to work in what expectations will feel like. It’s always been, especially as a kid, what do I need right now to just be okay until tomorrow?” And I think that really has instilled in me, being so process-oriented. I’m like, “I am not afforded a certain expectation of what it will be because then I’ll just be disappointed if I don’t get there.” And how do I even know what I want?

I mean, if I’m not feeling that, why don’t I just do something else? I talk about what I have to do to some people and they’re like, “That sucks.” And I am like,  I don’t really see it that way, because it’s exciting. It gets me to meet a lot of friends. I get to share my music with people and they actually seem like they give a shit.

An interesting fact is three of your top 10 Global streaming markets are in Australia, did you know that?

I don’t look at any of the analytics. You think I know how to use the internet? I am a musician.

But, seriously, One of my top markets is Australia?

Yep. Do you think that there’s anything about your music style, that connects you to Australian listeners?

I don’t know, that’s really funny. I’m first generation, so both my parents are immigrants. So we spent a lot of time in Western Europe because a lot of my family is in Italy still. And because I was splitting my time between here and there growing up, I became very versed in the culture of songwriters in Western Europe, which is really rich.

I know I have a lot of friends that have had great experiences as American folk singers going over to Australia… And obviously, the UK has history of folk and Celtic music in Ireland. So I know that, but I know nothing about the culture of music in Australia. I mean, I love a couple of bands that I think are from there or maybe New Zealand?

So I don’t know. I mean, at the end of the day, I’m such a songwriter person and wherever anyone would like my songs, I would love to go there.

It’s been great to find out about you. Larry Heath told me about you and then I checked out your EP. The first song I heard, it took me back to being back in college all angsty listening to the Garden State soundtrack, which is one of my favorite albums ever. And I was like, ‘This sounds like it should have been in that movie. Does Zach Braff know about Izzy?’ It made me wonder about some of your influences, are you a fan of The Shins and that style? Or am I just an old man talking about an album from the early 2000s.

No, dude, are you kidding? First of all, that’s my favorite type of music. The Shins are definitely a big part. And also, that style, I think, meshes with a lot of my stuff. My early stuff was very rooted in folk roots, especially the solo artists. But The Shins, it’s very much tongue-in-cheek and it’s fun and it’s so song-centric.  I also have an obsession with what makes a song accessible to everyone and what is a sound without being redundant? Something that everyone can get behind. I like simple songs and I like catchy songs. I think The Shins is a very accurate depiction of what I’m trying to do.

I’m glad I figured that out and hopefully Zach Braff gets to listen to you soon.

I hope so dude. 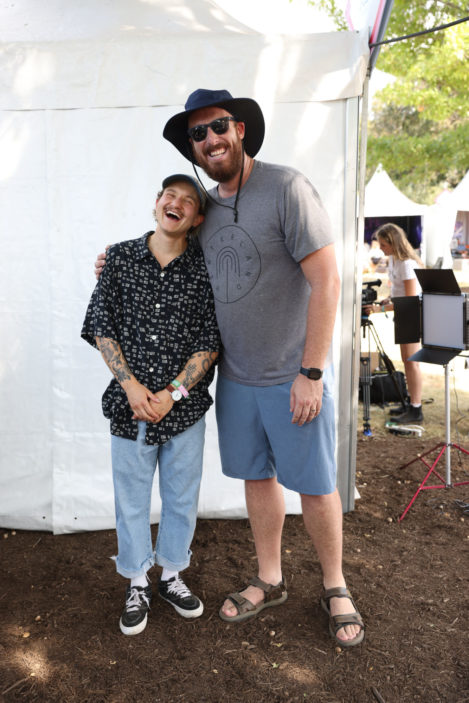