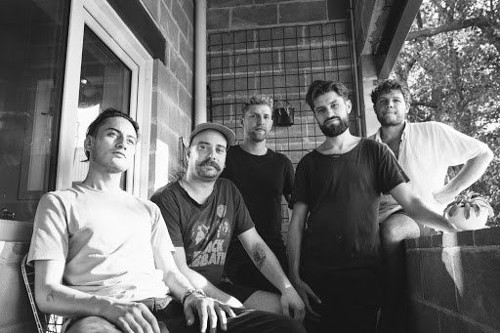 In a special co-curated program with Light Adelaide, light and sound will converge at The Lab over four electric weekends with some of the most cutting-edge new music locally and nationally. We spoke with David Rogriguez of Godriguez about his upcoming performance with his band Godtet.

Hope you haven’t had too many floods or anything like that over on the east coast.

Actually, I just got back yesterday from four weeks in Morocco, but I hear it was pretty shit. March or whatever I was over there as well, came back and like all my studio was mouldy. You remember when everyone’s houses were mouldy?

Yeah, I’m down in Adelaide so that weather doesn’t change much. It gets cold gets hot and that’s about it. So, what were you doing in Morocco?

Just music. We did these shows like about a month ago in Sydney with this guy called Julian Bel Bachir; he’s Moroccan and his African music crew and we just played with those guys. He was like man I’m going to Morocco for four weeks I was like f*** I’d love to do that, and he was like come. I fully got nothing for four weeks, so I just bought a ticket and left two days later.

I’d love to go – I’ve never been there but it sounds exciting and interesting.

It was cool. I’ve been to a bunch of other spots in Africa, but it’s super chill. Cairo and other places they’re just so like super religious, they hassle you they don’t make you feel welcome and shit. Whereas in Morocco everyone was like super welcoming.

Wow that must be quite a change going from somewhere like Morocco back to East Coast of Australia.

Yeah, I guess so. Something about it was like really chill ’cause the crew we were with, like I said that guy he had mad local crew. So, we were just cruising with them. It’s definitely mad change coming back. That was then and at the start of the year I did like 4 weeks in Cairo, Spain. I was born in Spain and coming from Spain all my life I’m going back and forth every year. I think if it wasn’t such a nice chill place to holiday in with culture and country and all that, the culture shock is more brutal. Coming back from Cairo that was like super heavy. Like you go out in Cairo like honestly guys just stare at you, you’re not allowed to get your phone out. Dudes pointing guns at you asking for your passport. Yeah, there’s some sketchy places in the world, ey.

The advantage is if you’re there with people you know, it makes it a bit safer.

Cairo is just intense in general. My wife and I were getting married. She’s Egyptian and we were there with her family. They speak a bit of Arabic. The vibe’s that heavy that it’s still pretty gnarly. It’s classic that over there everyone’s like oh you from Australia is it easy to get a visa? No one’s happy in Cairo everyone’s like f*** this place. In Morocco where I was, they were like this is heaven. Why would we ever want to live anywhere else? That’s gonna translate in the way that you feel about a space.
Anyway, I’m fresh talking about it, just doing all these budgets. That show I was talking about before I left, we’re like 8000 bucks in the red.

Damn, that’s harsh. The show coming up at the LAB in Adelaide, can you talk about how the band got together and who’s in it?

The music itself is cruisy and meditative with jazz influences. Is that a reflection of how you guys relate to each other?

I reckon, ey. A bunch of us had jazzy backgrounds, you know like art music backgrounds, I don’t know how to describe it. So, I guess it’s more like this band was like an opportunity for us to just do the music and play the way that we want to without be having to worry about making money or making people dance. It’s almost like a bit selfish where we just choose to play for ourselves if that makes sense.

I think a lot of musicians would be jealous of that situation, because it seems like a lot of them are expected to put out music for the label.

That’s exactly right and we were just like what the f*** are you doing this if you not doing it how you wanna do it. I think you nailed it. That’s the vibe, this project is about us playing exactly how we wanna play or how we feel at the time or whatever.

So, rather than mass audience, I guess you have a niche audience that really appreciate what you’re doing?

To be totally honest we don’t care. Anytime someone does like it or say they’re into it it’s like such a blessing. It’s the best thing ever you know. It totally blows my mind anytime anyone is like you know I really like it. It still blows my mind when people buy the records. We’re not gonna change what we do if people don’t like it.

I listened to Meditations, the first album, and you know it’s just one of those albums that just chills you out when you listen to it. Looking outside after a beautiful bit of rain on a dull day but it warms you up inside.

It blows my mind. We get a room, and we play this vibe. Then someone 12 months later is like Oh yeah, I listened to it and it’s kind of grey and drizzly here but you know it feels nice and it put me in a nice zone. That’s a trip, I love that. As much as we don’t care if people don’t like it, on the flip side it gets me so gee’d, it blows my mind that people do have the experiences that you just described.

Do you and the band have any specific influences?

I’ve got a bunch, but as far as influences for the band project goes, we try not have any preconceptions. A big part of this project is we don’t talk about what we wanna sound or be or do. Except for that; that’s the only thing is how like we don’t wanna be predictable, not to sound like anything. Specific artists names personally for me, Bill Frisell is a jazz guitarist that I really love and the music he makes influences me a lot. I feel like anyone’s favourite artists or anything man like your favourite people it all works. Like J Dilla, hip hop producer, I feel like that influences my thing.

Your personal work under Godriguez and Godtet as a band, there are slightly different approaches?

Yes, Godriguez is just me, kinda like producing stuff. The Godtet thing is these five including myself.

I guess it’s easy to separate the two out because when you’re in a room together with four other guys that’s your vibe versus you by yourself.

Exactly. Imagine you’re at home by yourself, what you get up to as to when you’ve got five mates over. It’s a full collaborative thing. You’re not gonna hang out with a mate and be like no, you don’t do that.

For someone that hasn’t seen you that would like to come along, what would they expect?

What we aim to do, and I hope that this is what people take away from it, it’s just a straight journey to outer space or to the inner self or to a meditative place or an exciting place or intriguing or thought-provoking. We just start playing, we’ve got no preconception of what we’re gonna do. I just close my eyes and then open it 60 minutes later. I just aim for everyone in the audience to just go with us on this big old trip. It’s improvised instrumental music we might fall into songs from the records as they come up. If I feel like going into this genus, I’ll just set it up and we’ll just go there.

I guess the good thing is that if you guys played together for a long time you can understand what each other’s doing?

I feel that’s a really big part of the band of the concept of the project is that it’s super about the connection and the intimate. Understanding what us five dudes have, not just as music artists but as mates. The interaction and the reaction and bouncing off each other.