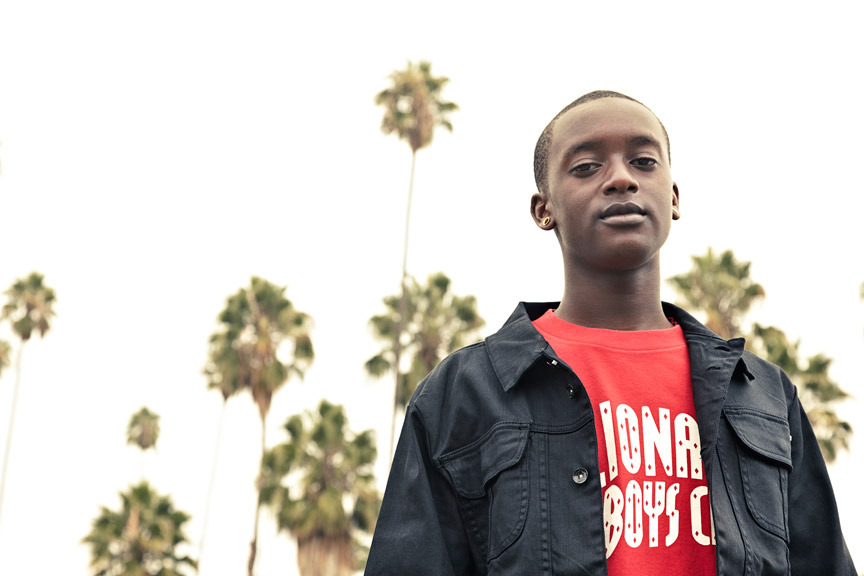 When he released Idle Time back in 2014, Compton rapper Buddy immediately showed the world he was bound to be one of the next big names in hip hop. Keeping up with features from the likes of Kendrick Lamar, Pharrell and even pop star Miley Cyrus, the young emcee proved his penmanship was as sharp as they come, channeled through a very diverse talent seeing as he could sing just as well as he could rap. Things were quiet for a few years, and then he came back onto the scene with two EPs through 2017, each location-based across L.A. and each completely different from another: an artsy project with Kaytranada and a beastly hip hop banger with Mike & Keys a few months later.

Now Buddy is gearing up to finally release that debut album and capitalise on last year’s successful run. He’s got one of the hottest tracks out right now (“Black” with A$AP Ferg), so we thought it was as good a time as any to sit down with him during the recent SXSW festival in Austin, Texas, where he emerged as one of the best hip hop acts of the entire week. You can check the full transcript below and be sure to catch “Black” after the jump.

How have the showcases been man?

Super fun, I’ve been killing it!

And how’s the new single “Black” been going down?

People like it. I do that song last so it’s like the last thing people hear. They really resonate with me after the show like, “Oh my god, that last record man, oh my god“.

Tell me a bit about the new single. How’d you come up with the concept and get [A$AP] Ferg on it?

Just kind of came out of the air man. The homie Jahaan Sweet came through with a bunch of beats. He’d play them out the AUX and I had the engineer recording what was coming out the AUX; I had a little mic and was just freestyling, getting a bunch of ideas down. I was like, “Black, black, black” as soon as that beat came on. Then we did like cadence and reference, just wrote out a first verse then a second.

Then I was in the studio with Pharrell and I was just trying to get some beats from him for the album. He was working with Ferg, and [Pharrell] got kids man so he was like, “I gotta get home to my triplets”…and then me and Ferg was still hanging out so I played him the record and he hopped on it that night.

2017 was a huge year for you. You put out two EPs – all those songs were fire. There was a stark difference between the two EPs though, and the sound. The first one [Ocean & Montana] – which I believe is a reference to Santa Monica – was breezy and artsy, the second one [Magnolia] was very hip hop, very tough. How does location effect your music?

Man, I lived in Santa Monica when I was doing the Kaytranada EP. Ocean and Montana was the cross streets right off the beach. I had the Jewish homie Brian and my roommate… we was just living the beach life. I’d ride my bike, skateboard, go to the beach, go to Venice and hang out with friends and cook food. I started baking pies and stuff, so it was all a different head space that I was in, rather than when I was living in Compton and going to North Hollywood off Magnolia, where I was working in the studio with Mike & Keys.

I was working with Mike & Keys the whole time, we’ve always been working together though. Kaytranada sent me a package of beats during the time when I lived in Santa Monica; I’d just lock myself in the studio with an engineer and wrote and recorded most of that EP then.

So I don’t know. Probably the difference in energy you know? I had to move from Santa Monica though, I stay in West Hollywood now because it’s close to all the studios where I’ve been working on my album.

It’s just a difference; Santa Monica feels like, “Oh I’ve already made a bunch of money, I’m ’bout to retire and just chill and get a dog and just walk my dog everyday and go to the same tea spot, get the same tea..You know what I mean? It seems super routine and relaxed.

West Hollywood where I stay now is like, “Oh man these niggas got money and working; it’s motivating, these niggas ain’t comfortable with how much money they got, they trying to make some more – I’m here for it”.

Determination! Yeah man you got it.

You’ve always been a busy artist. You rap, sing, act, have a background in theatre and all that. With this kind of multifaceted, I guess, experience…how do you balance it and plan to balance it moving forward in your career?

What are you trying to express with this album coming up?

Fun. Authenticity. Just like giving people an inside look of who I am as a person, whether they have met me or not. Giving people a sense of me, rather than just a playlist of songs I made; it’s more like a diary.

How will it be different from your previous material?

Just sound different you know? Way bigger, we’ve got a bunch of live instruments. The hardest producers – niggas got Grammys and shit.

How do you plan on bringing that through live?

I’m trying to put a band together man. I’m in the process of taking my live show to the next level; right now it’s just me and the homie Cedric my DJ. I’m trying to find a guitarist, bass player, maybe keyboardist and just build out a live show experience – get some stage design, maybe carry around some little stuff to set on stage and give people something to look at. We’ve got some visuals for some of the songs off the EP though, but we’ll have to figure something else out for songs off the new album.

What’s inspiring you at the moment?

Definitely traveling and different interactions I have with different individuals you know? Like everybody too; I’ve really just been taking inspirations from human interaction, even being out here at SXSW it’s just so different, it’s like a gumbo pot. You walk down 6th Street and one bar is just like house music, the next is like death metal, then you’ve got like a hip hop dude, and you’ve only passed three bars. And then like people outside the shows; people come up to me and express that they’re fans of my music, I get to see the different types of people that listen to my music…you have little Asian girls like, “Oh my god Buddy” then you have hard gangsta dread head black dudes like, “Your shit[is] hard Buddy, respect”. I really take all of that in, really let it resonate and it’s very inspiring to see who I touch without even touching them

What’s on your to-do list for the rest of the year?

I need to workout and just find my centre. I’m not centered right now. There’s a lot going on right now in Texas, I got like three shows a day. I just need to work out and get my breathing right, make sure my voice is together before I go on tour with Joey [Badass] and just stay happy, healthy, positive and motivated.

Any designs on coming down to Australia any time soon?

I’m for sure trying to go to Australia. Yeah I’m coming!