The quirky Melbourne-based pair had to delay the original release date amid another lockdown but eventually felt they had to get their music out there for their devoted fanbase.

We caught up with vocalist Monte Morgan, discussing the new album along with all things lyrics, fashion, tours, frilled neck lizard jumpers, selling their souls and their Triple J Like A Version experience.

G’day Monte, we all heard some of the singles well ahead of the album release, but can you tell us is there a theme to Divine Intervention?

Yeah. We wrote a song with Nick Littlemore in LA called ‘House of Holy’, and it had a spiritual essence to it. Then we turned around and realized we already had some that were in that theme. So we finished some of those and wrote some new ones.

It seems relevant today, in the age of conspiracy, and the importance of belief. It was a nice pivot for us because we see ourselves as theatre. We have our core themes of corporate mythology and business, and Australian icons. It was nice to pivot to a new world, but still be theatrical, and still have a layer of meaning to it, leaving people thinking ‘this is the real deal’ or ‘is this fun?’, or ‘is this funny?’, or ‘is it serious? ‘ or ‘is it all of the above? ‘.

Your first album Diplomatic Immunity has some political elements, so there’s none in this album?

Our last album was. As an example, Diplomatic Immunity referenced Canberra, politicians and travelling diplomats. So that’s as close to political as we would get. In some ways, we’re generally escapism and we’re relevant at any time. To feel good, or to feel your emotions and let yourself go into the music. But no, there’s no political agenda. It’s more like the theatre of politics. We exist in there.

And the name behind the album Divine Intervention, what does that mean?

It was hard to come up with something that just felt right. I’d just got a phone call intervention, and then we thought, there’s definitely a spiritual thing going on. And we thought it makes sense, listening and for a live show.

I don’t think my explanation will help it anymore because it’s theatre and so it’s about letting go and losing yourself into a cult, into a club. That’s a spiritual elation where you’ve taken drugs and you’ve seen the Second Coming, where you’re in a live show and where you’re levitating and we’re doing magic tricks or a music video.

I love the album artwork, it’s a bit Lime Cordiale. Can you tell us about that?

Harvey (Miller, Client Liaison’s keyboardist and producer) was looking through a lot of designers that he’d been saving. We liked this trippy element, losing yourself getting swallowed up in it. We liked the multi colours because what often is just two or three colours, but we got to go all psychedelic. It was a guy called Nolan Pelletier. He was incredible to work with. He’s an artist in Toronto. We worked over Zoom with him. He did our last single last year called “Intervention”. So we thought ‘yeah, let’s keep working with him’.

So the album came out late last week, not the ideal timing in lockdown?

Yeah, I mean our album was already overdue. When the pandemic hit, it felt like it was nearly complete but it turns out, it wasn’t. I feel lucky that we had all the songs that were finished, half-completed, some were released, and we’ve got to keep going.

We thought ‘we’ve just got to finish this’ and find a way to do it. We hoped this year we could do some touring towards the end of this year. But we’re not going to push it back because it needs to get out there. We need to release our music and we’ll just keep creating more.

When did you actually feel like you were finished with the album?

I wanted to ask you about the lyric ‘sex is in the oyster, taste is in the eye’ from single ‘Champagne Affection’. What does it mean?

I write a lot of lyrics. I keep some. That one might be like seven years old. I always liked it for some reason. Just that the surrealism of oyster is like a piece of luxury, as something sexual, an aphrodisiac. The song is about that first love, locking eyes with someone. The oyster is the first taste and also in the context of the song, in the second verse, the two lovers are in conversation at a party, and the lover is just talking crap. But all you’re thinking about is the oyster and looking in her eyes.

Now, I did want to ask about your fashion, specifically the frilled neck lizard jumper you sported on Like A Version in August.

Well, the frilled neck lizard was quite interesting. That was my mother, she makes lots of knits (shows home collection via Zoom). We’ve got our own wardrobe, because I’ve been collecting clothes, my whole life, vintage clothes, getting clothes made overseas in Asia when we travel. Getting things made here by costume designers and things.

My mum has always been an incredible knitter. My whole family would be dressed in, I’ve got three siblings, and all four of us and my two parents would all have these knitted jumpers. The frilled neck lizards was one but we re-made it because we’ve got our own designer line of clothes. We made that for the runway for a fashion festival in Sydney. I just pulled it out for Like a Version and a lot of people were asking about it.

But it’s actually a remake and the original was stolen at a DJ set in Falls Creek. Someone came up to me at a festival a year later and said ‘I saw the guy with the jumper, I know who he is’ and I was like ‘call me, call me I need that jumper back’. But we haven’t got it back.

Tell us about your Like A Version experience playing ‘Groove Is In The Heart’ which sounded great?

Thanks, that was really fun. It’s an awesome opportunity. The amount of noise that it creates is really nice. Everyone’s got an opinion so it’s quite scary. All the comments! don’t read the comments!, but thankfully people liked it. It was a good time. We put our own spin on it. We worked very hard on it, which we do for all our shows.

Were there any other covers in mind for that?

There was. We were talking about ‘Heaven Is A Place On Earth’. You would think the band could just play whatever they want but no, there’s quite a few criteria and it has to get approved by Triple J, which is quite hard. We got approved for that song but that song just didn’t work. We tried to do it and it just wasn’t suiting my voice. It’s just not the right vibe.

But we were like, ‘we’ve got to make this other one work’, otherwise they’ll say ‘no, you have to do it’, which they’ve been known to do. They’ve kind of forced bands to play songs. It’s quite hard because in order to reach everyone, you need to play a song that’s been a top 10 or top five hit from the last 30 years. Unless it’s in the last three years. But you’re limited to hits. You can’t do a long-forgotten song and make it yours.

Is it something that you may whip out in a live show sometime or is it a bit too difficult to recreate that?

Definitely, yeah. We’re doing a live stream on the day of our album launch and we’ll play it then. When we get to tour, I think the idea of the here and now, the idea of social media that what you’re watching is happening now, that’s out the window. The last time we released an album, it was all about pretending it was real. Nothing’s pre-recorded. But people have spent two years in a blur. They can’t remember what day is what, so if we pull that out in two years at a show, I’m sure people will enjoy themselves.

Can you plan much of a tour at the moment?

There’s just always talk of shows. Three months in the future, six months in the future, they’ll get delayed, cancelled, new ones will get booked. It’s quite difficult to book your tour which is sad, because that’s where you go to prove yourself, numbers-wise, but also you connect to your core fan base, you do it on your own terms, you can play a longer set in a theatre with your own lighting. But now it’s quite hard to do indoor shows. There’s not much faith in that. It looks like we might be doing festivals next year, which will be fun. 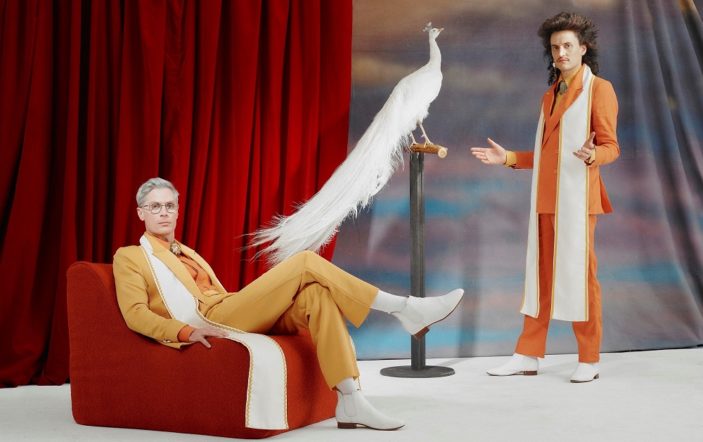 The Victorian road map out of lockdown, does that offer any hope?

Well, sadly, there’s really very little for live music there. Live music, during this whole pandemic, we’ve played maybe three times. We’re one of the last industries. But thankfully, we get to still do recorded music and merchandise and other things.

Yeah, I mean, for you guys, especially on the way you’re dressing. As you said, the theatre aspect, it’s, it’s a big part of what you do.

Definitely. We’re lucky that we have our audience. If someone took live music away from the first five years of Client Liaison, it wouldn’t exist. We wouldn’t have released songs without our friends putting on house parties to make us perform and pushing us out there. The deadline of a show would always pull us together, and we’d finish songs and we try stuff out. We always say, we’re an underground band trying to be pop, too pop to be underground and too underground to be pop. And that was really important, our connection with our live shows where we’d play unreleased music and create a following. I feel for bands in that part of their career.

On live shows, it was a shame the Splendour in the Grass festival couldn’t go ahead but how was your Splendour XR experience?

We put a lot of work into it. And we’ve done a few live stream things where we do put a lot of work into it, we can’t help ourselves. In the end, for me, it was a bit sad because it was a little bit clunky for a user to log in. Everyone knew it wasn’t live. I’m very thankful we got to do it and good on them for pushing the boundaries of live streaming and finding something for bands to do in this time. There’s very little that comes our way right now so that was awesome but also it was just sad, it made me miss the real thing.

Also, I heard you two are selling your souls. Can you tell us about that?

We’ve always been interested in NFTs and there’s a bit of buzz around them right now. We can’t tour. We always like a bit of a spin on whatever we’re doing to create a story. For example, when we wrote a song about a limousine, we bought a limousine. So in this case, Harvey put it well, an NFT is intangible, and so is a soul. It’s kind of a comment on NFTs themselves.

We’re not in it to make lots of money but more to make some noise and get people talking about it and re-thinking how they could be used. It fits with the theme of the album. There’s a lyric in the album ‘sell your soul for cheap emotions, but who will love you when you’re gone?’ So, in the end, it’s a bit of fun.