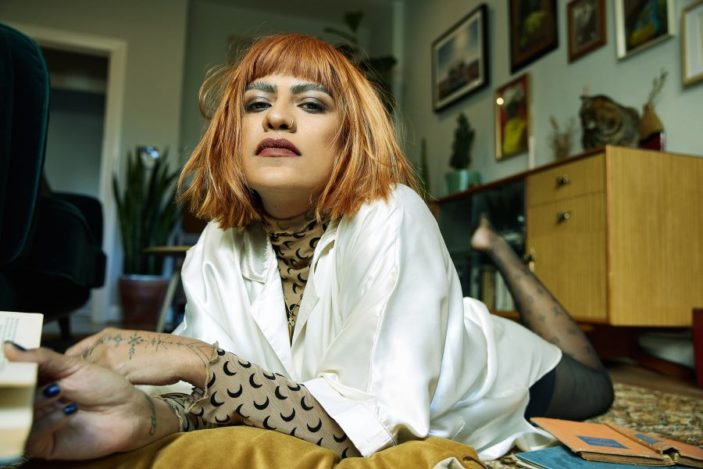 Sydney’s Charlie Collins has today released her much-anticipated sophomore album, Undone. The album is a deeply personal one, traversing the mixed emotions from the end of a long-term relationship. Charlie is fearless in her expression as she tackles this head-on.

To celebrate the release of the album, Charlie has a headline show at The Oxford Art Factory on the 14th May (links below) and will be performing at Splendour in the Grass.

I caught up with Charlie to chat about the album, tackling songs that are so personal with your ex-partner, as well as her formative years in Tamworth.

Great – congrats on the album

Thank you so much

How do you feel getting this album out, especially given that it’s so personal?

When you started working on it, did you think it was going to be such a personal, holding a mirror to yourself experience?

No, I finished this album almost 2 years ago. I got to this point where I knew that maybe it just wasn’t quite right. It wasn’t as deep as I wanted it to be, or as personal. So I scrapped half of it and rewrote it.

There are songs on the record that I did not think that people would hear, because they are really personal. It’s a good feeling!

You’ve done co-writes on this. What’s it like doing a co-write on a song that is so personal?

I cowrite with a friend which makes it easier, as it’s probably stuff that I’d just call them up and talk to them about anyway, but in a session we just wrote about it instead. They weren’t random, so it made it a lot easier to spill your heart out to your friends pretty much.

You worked with some guns here, Japanese Wallpaper (Gab Strum) on the record…

Yes I did – he is a star, and also the nicest person in the world. We’ve been writing to each other for years, and talked about writing together. This time he was in Sydney and it happened. It was so great. He is syuch a dear friend and I’m a dear friend of what he does.

And Xavier Dunn as well
Yeah – he is great. We had so much fun writing “Backseat Valentine”. It’s one of the funnest sessions I’ve had.

You roped in Jarrod James too
Yeah – he is another closer friend. It was nice to be able to collaborate together

Is it harder to write songs when life is peachy?

You must do a good job with navigating your exes. You’ve got your ex that helped on the title track

I know, I do. We were together for such a long time. In fact, I have two of my exes on the album. One of them sings a song with me, and the other produced the song, so that’s good. <Laughs>
I’m such a fan of Chris who produced “Undone”, of his work. I really admire his work and what he does. It’s so great that we got to collaborate on the record after the whole record being pretty much about him. <laughs> It was great.

Were you able to record with the other band members in the one place during lockdown?

Yeah – we went up to The Grove, which was so great. We did it with Scott Horschroft and Joji Melani also co-produced. This was peak covid. It was nice to get away from everything, go up to the Grove, create together and make magic. It was such a beautiful experience.

It’s iconic. It sounds great. It has such a great live room. It’s away from everything, and it’s on acres. You can lose yourself there.

You’ve been in the UK recently I believe

I have – it was great. The best road trip ever. It was a bit of a break before the album came out. I realised I’ve never been on a holiday just by myself. So initially I just went there to get away from everything and do a bit of self-discovery. It was great, then I managed to get support with Gang Of Youths which was such a great bonus

You’ve been playing gigs since you were a wee girl. What were some of the acts you used to see when you were growing up that inspired you?

My parents would take me to the pub and it would be a jam night. Locals would get up with incredible voices and sing the most beautiful music, so it wasn’t even about being an artist. I was so impressed by the locals with their music and their stories.

Yeah – seriously – locals would have their guitars and books. It was a cool way to grow up, rather than have sleep-overs and play ‘hide and seek’ or playing ‘catch and kiss’, I was singing in pubs. It was a great childhood.

And you must be looking forward to your live shows coming up.

I’m so looking forward to playing live. I had my first rehearsal yesterday with the band, and it was very exciting. Everything felt really good. It’s going to be nice to play these songs live. It’s going to be a whole lot of fun.

What’s on your Spotify?

Let’s take a look. Well – Nebraska, Bruce Springsteen is my goto record. A Deeper Understanding – The War on Drugs, Time (The Revelator) – Gillian Welsch. Patsy Cline and  Sharon Van Etten. That’s what I’ve been listening to!

I see you’ve got some vinyl too

I know – vinyl is such a beautiful thing to put out, let alone own. It’s so tangible. When you get your first vinyl, you think ‘holy shit, I’m a real artist’.

I grew up with vinyl, so my memories of the albums were linked with the physical process, the turning of the record at the end of the first side, ready for the second half. You seemed more engaged with it.

Yeah- it’s the best sound, you can hear everything. It’s like the person is in the room.

Thanks for the chat – have a happy release day, and have a great tour!