Bob Evans, aka Kevin Mitchell, releases his sixth studio album, Tomorrowland, today but it’s also his first since parting with EMI Music. Mitchell calls it his “entry into middle age”, with shades of Bruce Springsteen, Tom Petty and The Cure.

Tomorrowland is a vision long held by Mitchell and with the “silver lining” that COVID-19 offered him, being time, he believes it’s his “most realized” work yet.

Throwing aside the shackles of record deals, he’s self-financed the project himself as part of a new chapter of the father-of-two 43-year-old’s journey which spans way back to the late 90s as a teenager with Jebediah.

The Perth-raised Melbourne-based musician spoke to the AU Review ahead of his album release and upon the announcement of an album tour in June spanning Queensland, NSW, SA, WA and Victoria.

Thanks for joining us, Kevin. First of all, I’ve got to ask, so many albums being released now have been delayed or drawn out due to COVID-19. Have you a got similar story with Tomorrowland?

It’s been a long time coming. I’ve been sitting on this record for a year waiting for all the craziness of COVID to end. I started in the studio in the first two weeks of March last year and we finished up the recording sessions at pretty much exactly the same time as everything started to go to crap. The last weekend that I spent in the studio was the same weekend that everything got cancelled. And then two weeks or so after that, we were going into lockdown.

It was just such a weird time for everybody but particularly being in Victoria. We just didn’t know what was going to happen for a few months there and spent the rest of the year figuring out how we were going to finish the record, until we finally put out a song from the record. It’s good to be at the stage now where it’s all about to come out and people can listen to it.

I know you’ve got a few kids but with that extra time, were you tinkering and tweaking the songs constantly?

It was kind of the silver lining to the project as I’ve never had so much time. I was able to really finetune the mixing and all the artwork, and even the first video that we made. There wasn’t any compromise because of time limits, which really was a blessing in disguise.

As it turns out because of this, I feel like this is the most realized one of my records has felt for a really long time. It just feels like the vision that I had years ago. That can be a really difficult thing to do. Quite often I feel like it comes up a little bit short or doesn’t quite match what I had in mind for all sorts of different reasons. But this one just feels like the most fully realized one that I’ve made in a long time.

That bodes well for listeners! Can you talk me through some of the themes and the inspiration behind Tomorrowland?

I was digging into a lot of classic rock, a lot of 80s stuff, Bruce Springsteen and Tom Petty. I was also really getting into late 80’s indie guitar, stuff like The Cure. I became obsessed with that clean electric guitar sound. My idea was how can I indulge my love of that stuff and bring it into a Bob Evans context. That was sort of what I wanted to do.

Lyrically, the themes just present themselves to me after a while after I’ve written a bunch of songs and I can see patterns emerging. I didn’t really realize what the themes of the songs were until we were in the studio, and that’s when I came up with the title. All the songs seem to revolve around the concept of time, looking back or looking ahead, and both memories and the future, both being clouded.

I feel like it’s my record that defines my entry into middle age. I’m 43-years-old and I feel like I have so many years behind me now, but I think there’s a lot of years ahead of me as well. I feel my age. I feel very much in the middle of it. It’s a new kind of feeling of just having this weight of history behind me to draw upon and having done a few things in my life now. But also thinking about the future in a really different way, because I’ve got children. It’s not just my future, my tomorrow, that I’m thinking. I’m thinking very much about them as well. 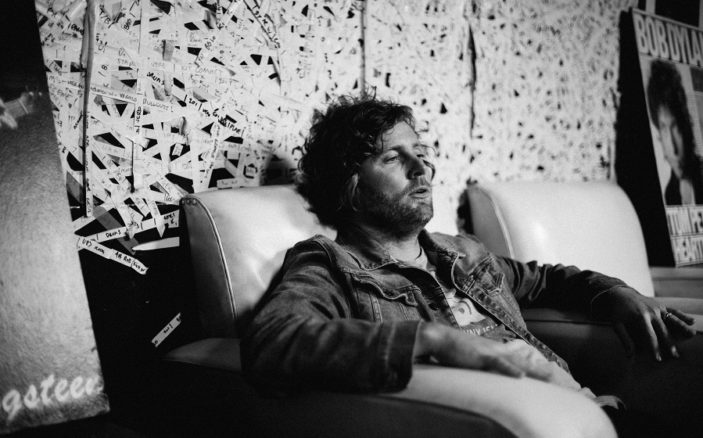 It’s been five years since your last album so this entry into your middle age, I dare say there’s a progression of style?

I’m in a period of my life/career, they’re both kind of interwoven, where I really only want to put out records when I’ve got something to say, or I’ve got something new to offer. I’m no longer beholden to being in that routine of having to put out a record every two to three years, just for the sake of putting out a record or just for the sake of my career.

There’s a lot of things that have affected this record too, apart from just the passing of time. I came out of 2018, I put out a little ‘best of’ record and then we reached the end of my contract with my record label. I was entering this new phase of independence of self-financing this record. I went into it feeling really refreshed, feeling like I was in this position where I could really enter into a new chapter. Psychologically that’s really worked for me. I felt excited about pushing forward with what I was doing.

We’ve heard the single ‘Concrete Heart’. Can you tell us the story behind that?

It’s the idea, in the comments section of whatever the argument of the day is on social media, often the bleeding heart gets put down from more conservative parts of society. I’ve just always been really funny with them because it’s almost like the criticism is about caring too much so I just thought ‘Concrete Heart’ was the opposite of that. That’s quite a fun way of approaching that whole thing. Hopefully, it’s seen as being set free and being able to walk away from something and being comfortable with wearing the bleeding heart tag as a badge of honour.

Any other songs on the album personal favourites, or are they like your kids, you love them all equally?

Hah, there’s another song on there called ‘Fits & Starts’, which is the second last song of the record and wasn’t supposed to be on the album. The only reason that it’s on there is because there was going to be only 10 songs on the record and we recorded them all in six days. We got to the last day, and we realized that we were going to finish early and there was time to do one more. I was able to go back over my demos and pluck out another song the guys had never heard. We bashed it out and it came out really, really well. So one that was unrehearsed turned out to be one of my favourite songs on the record.

It was a happy accident, I don’t know if that’s the right expression! A lot of things fell into place on this record. I like to think that there’s an energy to the record that comes from spontaneity and not overthinking things, not heavily editing and crafting things. It’s got its own sort of character that none of my other albums have done because it’s recorded so differently to all my past records.

It sounds very organic which is always a good thing. On that, how do you go about being creative and organic with kids in your life nowadays?

Those first few years before they start school it’s really, really difficult to juggle everything combined. Being a parent, my wife works, so while I wasn’t on tour, I was a stay-at-home dad for my kids. It forced me to become more disciplined. It forced me to think about how I could be creative in a different way. In a more structured kind of way. It was kind of good for me, I suppose because it pushed me to think differently about how to be creative. Now that they’re in school, and my day is free again, but lessons have continued on.

You’ve been a musician your whole adult life too, from Jebediah in your teens to Bob Evans. Professionally have you ever looked beyond entertainment?

I don’t know what else I’d be good at! Every now and then little things will come my way, lots of radio stuff, I make a podcast fairly infrequently. Over the last few years I’ve said yes to a few things which scared me such as Beatles tribute shows, I just did a couple of weeks at the Adelaide Fringe Festival earlier this year doing a theatre-style rock tribute show called the 27 Club. That pushed me out of my comfort zone. I just wouldn’t have had the balls to do in my 20s or even my early 30s because I would have doubted my ability.

I always doubted my ability to stretch beyond just doing my stuff, my songs. I learned so much from doing that because you will end up in situations working with people that are outside your own little bubble, such as those who have backgrounds in jazz, cabaret or whatever.

That sentiment ties into Tomorrowland because I never would have had the courage to commit to recording live before because I would have thought that’s too risky. It feels good to have got to an age where I’ve backed myself to do it and obviously surrounded myself with incredibly talented musicians that I couldn’t have done it without.

Thanks heaps for your time, good luck with the new record and the upcoming tour!

Tomorrowland by Bob Evans is out now.

Bob Evans’ tour dates are as follows (tickets via bobevans.com.au):