Interview: Bill Murray and Jan Vogler talk about New Worlds on the steps of the Sydney Opera House

Earlier today, I stood on the steps of the Sydney Opera House with one of the most iconic names in entertainment, Bill Murray, and acclaimed classical cellist Jan Vogler. The pair are performing tonight and tomorrow night with “Friends”, including cellist Mira Wang, and violinist Vanessa Perez.

This marks the first time Vogler has made it to Australia, and the second time for Murray, who said he was last here in the 1980s for a holiday – so this is the first professional engagement for the American actor in this part of the world. In the production, Murray speaks, and occasionally sings, over the classical arrangements of Vogler and Friends. His words are predominantly from prose and poetry of some of America’s greatest writers – Mark Twain, George Gershwin, Mark Twain, Ernest Hemingway, Leonard Bernstein, James Thurber and more.

I asked Murray what he thought someone like Twain or Thurber might say about the building they were about to step foot inside, the Sydney Opera House. Turning his back to me, he admired the building as he spoke, “I’m excited to go inside. But from this angle, which I’ve never seen it from before, it actually looks like a conquistador’s helmet, doesn’t it?” which was met with laughs from the attending media, “or like a Cathedral?”, added Vogler.

Murray continued, “you must enjoy getting to wake up to this view every day. Because it’s always changing isn’t it?”. Vogler stepped in to help answer the question, “and as for Mark Twain, I would think he would be very excited. Twain was on the road most of his life. He read from his book everyday… and now we have been reading his book every day somewhere… so I think he would have come here and read from his book. So I think we’re taking over from his job because he’s not around anymore.” 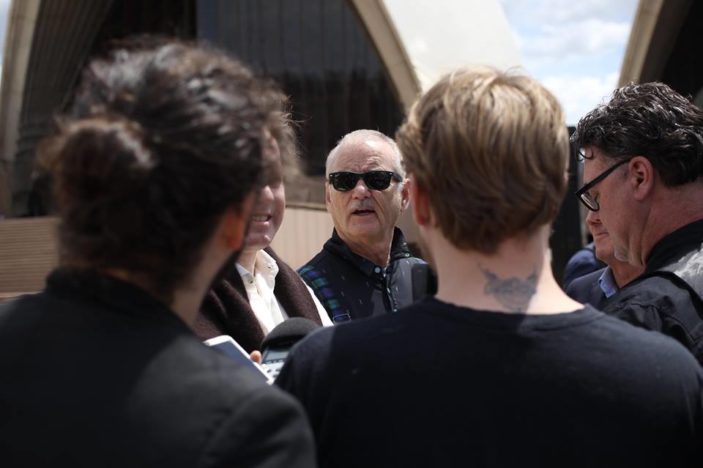 As for how the show balances the expectation of humour (with it being Bill Murray and all), with the serious nature of the content, Murray had this to say: “You can’t help but be funny sometimes. Even those that aren’t funny are funny sometimes, but I guess we shape it to how the room feels. You get a very direct response right away. ”

“Live performance, with this sort of material… it’s rare. You’re playing with all different types of emotions, and lots of different ideas. It’s a far ranging show, we do a lot of things. And their playing is just so good, it’s kind of dazzling. So we dazzle the audience first, and then we send our people into the audience and go through their pockets and purses. It’s been a lot of fun to play every single night, sometimes we think we might be getting too funny or it’s not funny enough, but the material really doesn’t drag you down. It’s so elevated that we just try to hang onto it.”

I mentioned how Australian audiences may not know all the American writers featured in the performance, so I asked if there was anyone they hoped our audiences would try and learn more about. Murray answered, “everything we do except for the encores is noted in the programs, so you can find out who it is. We do a couple of encores and we try to announce who that is so that if they wish to read more they can… a lot of people in the audience will get fasincated by at least one of the poets we do.”

Vogler commented on his favourite poet in program, Walt Whitman. “Whitman is absolutely a genius,” he said. Murray agreed on the strength of the Whitman inclusion. “The Whitman piece is great to do every night. It’s the most challenging piece, it sort of slings a boomerang up into the ceiling and says “hang on, here we go”. It’s really a wake up. It’s great to start our show with it. And get it going. We feel confident that if we can live up to that kind of demand, that we’ll be find.”

Is there drinking involved though when they speak the words of Hemmingway? “We’re not giving everything away”, quipped Vogler.

And as for their favourite part of the show? Murray says, “When it first starts, the audience is unsure, but then there’s that moment when we’ve really won the crowd over, and they really see what we’re doing, and they respond to it… then we really get to revel in it, and luxuriate in the sounds and the words. And you get to sort of flex it and have some fun with it.”

“This show has something for everybody,” Vogler added. “If you don’t like music so much, you will enjoy other parts of it. So it’s really going to entertain everybody.”

New Worlds, featuring Bill Murray, Jan Vogler and Friends enjoys performances tonight and tomorrow night at the Sydney Opera House. Tickets and more details are available HERE. The show then tours to New Zealand, Brisbane and Melbourne. You can find more details at the official website.