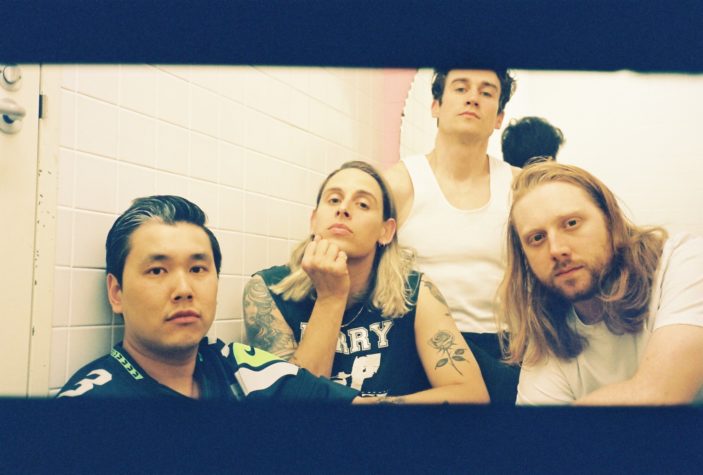 Melbourne rockers Slowly Slowly have quickly become one of the country’s most adored bands. After a string of diverse singles and regional tour of Australia, their fourth album Daisy Chain will be out 4 November via UNFD.

We had a chat with vocalist and guitarist Ben Stewart about the album and more.

“I kind of blocked out a lot of lockdown. I find it quite difficult to remember the crossover point (between albums) because I wrote so much in that period and put things in different baskets then moved on and came back. We have been sitting on it for quite a while.”

Singles “Blueprint”, “Nothing On”, “Forget You” and title track opener “Daisy Chain” are all very different from each other. The album’s sonic diversity while maintaining a coherent narrative is a testament to Stewart’s songwriting ability.

“I think because of the isolation of the writing process, I was able to be a little bit broader with what I considered to be Slowly. I just tried very hard to listen to the little voice that either likes something or doesn’t like something. It doesn’t have to subscribe to a genre or the concept that we’ve built for Slowly Slowly. I just wanted to be like a kid with music again.”

Daisy Chain, like the rest of the band’s albums, was produced by Stewart himself with Jonathan Gilmore handling the mix. His esteemed reputation has earned him production credits on projects by Kwasi, Bec Stevens and Tyler Richardson (Luca Brasi) among others.

“Daisy Chain was one of the first things that I put my hand up and said, ‘Hey, I produced this’. Every Slowly Slowly record to date, I produced – it’s just not something that I knew I was doing. I just thought that everybody did that in their band, handle things from the cradle to the grave. From that, there’s been a few other projects that have gravitated towards me.”

Stewart’s lyrics have always been poignant and poetic with melancholic undertones. The latest album uses more of a poppy approach in the music to contrast the heavy subject matter, which he says makes the songs more enjoyable to perform.

“In retrospect, it was probably like a bit of a coping mechanism because it was such a dark time. At the time, I was just dancing around my writing room and naturally gravitating towards more groove-based music and stuff you can dance to. I just missed that celebration and now that shows are back it’s just so cool to see people dancing. It’s such a nice feeling when you get to describe the full human experience.

“We really wanted to just create something that we loved, so we used that as the barometer for the entire process.”

The theme of Daisy Chain comes from the album’s circular narrative, using interweaved flowers as a metaphor for being saved by something so simple.

“The overarching theme of the record came together on the song Daisy Chain, the last written for the record. I was looking for something that had some kind of resolution so all of the individual components made sense. This metaphor of a daisy chain fell out of my mouth and it kind of fitted immediately. It almost works as like a childish nursery rhyme, that main refrain at the start and the end. Something so seemingly delicate has actually been a source of strength for you.”

Apart from the catchy singles, “Turn It Around” and “God” are definitely standouts on the record. With the powerful strings and passionate vocal performance of the latter, it seems that it’s a personal favourite of Stewart’s as well.

“I think my favourite is probably God. It was quite an important cornerstone in my life when there were a few things going on that made me look at the broader picture for the first time. There are so many strange layers in that song that if you took them out, you wouldn’t even imagine them in a song, but contextually the arrangement is sick.”

Of course, the modest collaboration with the legendary Dashboard Confessional on “Moving Trains” can’t be overlooked. Apparently, the track has been in the works for about a decade and was always on the table for each Slowly or Congrats project, but eventually found its place on Daisy Chain.

“Chris made everything easy and he approached the song like it was one of his own. He wrote his verse, which completely encapsulated the ethos behind it all. That’s the oldest song on the record, probably older than 10 years now. Every release I’ve ever had it’s been a contender, but it finally felt right this time.”

In support of the release, Slowly Slowly have announced a special screening of a documentary at Melbourne’s revered Thornbury Picture House on Saturday 5 Nov. This will be followed by acoustic shows in Sydney, Melbourne and Brisbane the week after.

“We have an installation for God where we’ve set up a listening booth sponsored by Yamaha, which is inside an album-themed confessional that we had custom built. We’re screening a small-scale concert documentary about Daisy Chain, showcasing some songs that we played at the Forum and at Unify. Then the acoustic performances will be a little East Coast run and I’ll be performing a slew of old songs and new on guitar with piano accompaniment.”

You can get tickets to the acoustic shows HERE. Stay connected by following the band on Facebook and Instagram.