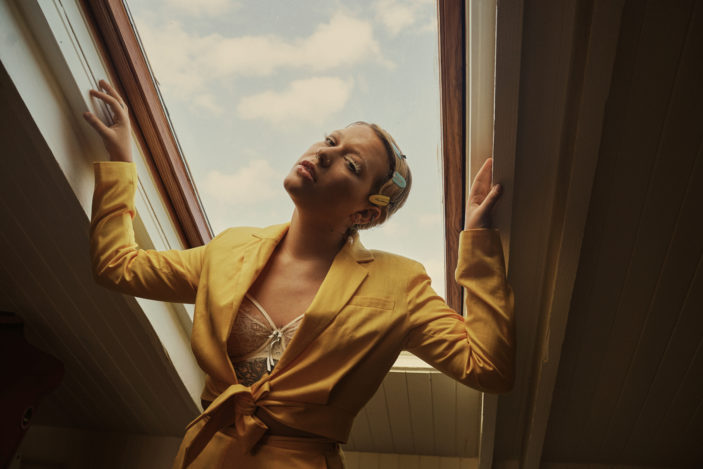 Aya Yves was introduced to the Australian music scene with her dark pop track “(in)Sanity”, which flexed her natural control over an acrobatics of vocals. Her latest offering, “Smart Girls” is equally impressive as it takes its audience on a journey through stripping back and rebuilding, layering an earworm plucked guitar and deep piano chords with a gritty synth production.

Channelling the all too familiar destructive dialogue after a breakup (or a bad idea), Aya flips hindsight into a low-key anthem, assuring us that smart girls make mistakes too. A taste from her upcoming debut EP, the future for Aya Yves looks very exciting despite the climate for a comeuppance.

We chatted to Aya about her recent single as she prepped for its music video shoot.

Hey Aya! How are you doing?

I’m super, I’ve just been making pumpkin soup this morning because we’re filming a big scene in the music video tomorrow and I’ve got to feed everyone. So I’m making pumpkin soup and jackfruit pasta. I smell like pumpkin and roasted garlic right now, which I’m not super mad about, but yeah.

I hope you made a double batch so you get to keep half at home as well. On my first listen of “Smart Girls”, I was like, “There’s a lot of different worlds within this one song.” It starts really dark and then regresses to that plucked guitar before that dark pop slowly creeps back in. Was that something you set out to create when you first started the song? Were you conscious of the different realms?

I think it just kind of happened because with writing the song, I guess the thing is with relationships, even if it ends up shit, it’s not like it was bad the whole time. So there’s light and dark even within negative relationships and I think that Xavier [Dunn] did a really good job of portraying that production-wise as well. Because I think lyrically, it comes across because you’re kind of floating back into that space of like, “Oh, remember how we met and it was really beautiful. And then like we had this amazing night,” and then it goes into, “Ugh, that was a bad idea, but that’s okay because smart girls make mistakes.”

And I really love that. Just the whole concept of the song, because so many times when you come out of a relationship, you’re like beating yourself up, being like, “That was so stupid, why didn’t I see at the time?” And feeling stupid is such a classic internal monologue, but it’s nice validation to be like, “No, smart girls make mistakes. You’re not stupid. You should wear your heart on your sleeve.”

Yeah, literally. I think it’s very easy to get into a space of beating yourself up about it and I was kind of feeling like that. I was like, “Why do I even go into this?” It’s like, he was a hot mess. I knew that he was a hot mess and I decided to just go for it anyway. And I knew better, but I did it. And so I was definitely in a “What the hell was I thinking?” vibe.

Well I guess you’ve got to touch the flame to know that it’s hot, right?

Yeah, yeah, we’ll go with that!

I saw a photo on Jordi White’s Instagram of you and Bri Clark [who both co-wrote with Aya] that was posted close to 46 weeks ago. Is this the same writing session for “Smart Girls”? You’ve been sitting on this for a while!

Yeah! We wrote it like almost this time last year. I think maybe even September. Because we did a couple of days in a row. We did two sessions and obviously the other one hasn’t come out yet, but we gelled really well together. They were kind of at the start of me co-writing, with collaborating with Jordi and Bri and still probably my favourite collaborators. I hope that doesn’t land me in any hot water, but we just gelled really well together and had a really, really fun time. And they’ve actually co-written four tracks off my EP!

I was going to ask, what’s this all leading towards! An EP – when can we expect that?

I’m thinking around October. It hasn’t been set in stone just yet. I’m kind of sussing out, obviously what’s happening with COVID and stretching out my content is probably not a bad idea through this year, but yeah. Looking like October.

I wrote a song with LANKS, and that’s the next song that’s coming out actually.

September. Again a bit up in the air because I’m thinking I might stretch out a bit. Because I feel like, with so many people like releasing at the moment as well, because no one can tour so everyone’s just writing and releasing. I feel like one a month might be like too many…

You don’t want it to get lost in all the sound.

And have enough time for people to want more and might get hyped up about it too.

Exactly, you want each song to have a life of its own so you need to give it time to breathe.

Speaking of all your craft pursuits, will you ever open like an Etsy store? Because I saw you did another jacket for one lucky listener for “Smart Girls”, things like that. You’re just a woman of many talents.

Well look, I don’t know if I’ll open an Etsy store because if I turn everything that I do creatively into a job then I’d never stop working. I’m thinking of, at some point maybe selling the jackets as much, but because I’ve been painting, I don’t know if you’ve seen that I’ve been painting jumpers for merch. So that’s been a thing that’s been keeping me busy. After this music video, I kind of want to get into art direction and creative direction for other people because it’s been so much fun putting this all together.

Amazing! Are you the one who did the music video treatment? Was this your brainchild?

Yeah, so this is a lot of my brainchild. It was kind of what I’ve been focusing on for the last like two months, to be honest.

That’s such a good project to have during COVID as well. Was it hard to get off the ground or has it been really easy to find people to jump on board the team?

It has been a bit of a mission. We’ve had to shuffle in and out people just because of restrictions. The director that I did have on board, he spends a lot of time up in Canberra, but he lives in Melbourne. So he went into lockdown obviously like a month ago and so we had to kind of improvise from that scenario onwards, but now we’ve got a pretty solid Canberra team and because our COVID cases are really low here, thankfully we’ve been able to go ahead.

We’ve only got one active case. It’s pretty sweet here and everyone on set had to wear masks and there’s hand sanitiser everywhere and all the classic things.

Playing it safe. While I’ve got you, I’ve always been really curious about your tattoos. What was your first tattoo?

My first tattoo with a Lotus flower on my sternum.

Oh wow, that’s a bold one to get for your first!

Yeah, I don’t do things in half.

You do not. Why a Lotus flower?

This is probably going to sound cheesy, but they grow in muddy water and they come out as one of the world’s most revered nicest smelling flowers. So it’s just kind of like shit things happen in life, but what is it? “Diamonds are made under pressure”? That kind of vibe, but I’m not a diamonds girl. I’m a bit earthier than that so.

I really like that you’ve actually got a meaning and thought behind that. What’s the most meaningful tattoo to you?

I have favourites for different reasons. In terms of look, the ones on my shoulder aren’t my favourite, which is just like big flowers, cause I just really love the artist that did them. But there’s no meaning behind those ones, but probably my most meaningful is a tiny Teddy bear on my bicep.

It’s my childhood Teddy that I got when I was three and I got him from Salvos cause I went in there with Mum like op-shopping and he looked so sad in the toy pile. And I remember asking Mum if I could get him and I thought 55 cents was a lot of money. I thought it was so expensive. And she’d say no. She said yeah and so I’ve had this teddy ever since.

His name’s Šmudla, which is the Czech name for the seventh dwarf in Snow White, for Dopey. It kind of means cute little like cuddly thing is essentially what it means. And so yeah, I got him tattooed on Mother’s Day, I don’t know, maybe four years ago, five years ago. And he’s the size of like 50 cents. And he’s holding a little bunch of lavender cause my dad used to put lavender oil on my sheets and pillows so I would sleep better.

Wow, you have really well-layered meanings to your tattoos. I appreciate that. Does your mum love it?

She actually hates tattoos, but she couldn’t hate this one. I sent her a photo and I was like, “Happy Mother’s Day.” And she was like, “What? You didn’t.” And I’m like, “Yeah I did!” But I think that both my parents just accept that tattoos are obviously a part of me now, they can’t do anything about it. I have a really big one from like mid-thigh to like my ribs.

That is big! What is it?

Are you a good gardener? Do you have a lot of flowers at home?

I don’t have flowers. I have green plants though.

All right, what else is on the cards then? What’s the timeline for that release of your music video?

Hoping mid-August, so not too far away. And I have a gig! Oh my gosh. I’m so excited to play! Assuming that Canberra is still good with COVID restrictions, I’m playing a super intimate acoustic show, stripped back version of the EP at Smith’s [Alternative]. And that one sold out pretty quickly because it was only 48 tickets. And then I’m playing a show with Hands Like Houses and the full band, end of August.

Is that one live as well? Or is that online?

That’s a livestream. It will have some people there, so that’ll be nice because there’ll actually be applause between songs. But then it’ll be streamed and it’s a professional production via a professional AV company. Stage, lighting, sound, everything. It’s pretty amazing.

That sounds awesome. I’m going to let you get back to your cook up, but thank you so much for chatting with me, Aya. Congrats on the single!