Interview: Archie Roach on his Kitchen Table Yarns and his foundation stage at the Port Fairy Folk Festival 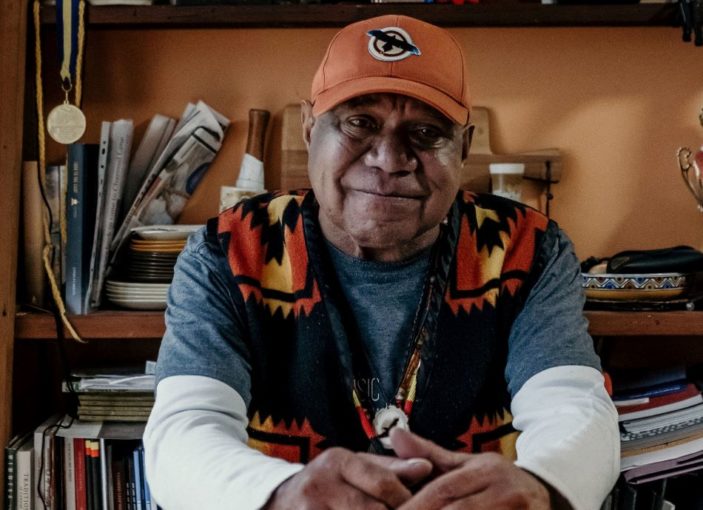 Archie Roach is a national treasure who has led an extraordinary life. As a two-year-old, he was forcibly removed from his family, as part of the “Stolen Generation”. This dislocation was to have a profound effect on Archie and his siblings, as he battled alcoholism and struggled to find his identity.

He was able to rise from the despair, meeting the late great Ruby Hunter, and together they created a family and slowly found contentment. Archie has forged a legacy through his music and by helping his community. His debut album, Charcoal Lane, won 2 ARIA’s and told the story of his journey.  Further success followed, and Archie and Ruby travelled the country and went abroad singing the songs which have brought so much joy to their fans worldwide.

With the current pandemic limiting touring, and with a desire to give a ‘leg up’ to other First Nations artists, Archie has launched a 12-part YouTube series, called Archies Kitchen Table Yarns. In each episode he has a chat with a First Nations singer/songwriter.

Furthermore, in his quest to continue helping his fellow First Nations artists, Archie has been bestowed from the Port Fairy Festival, his own foundation stage, starting with the 2022 edition of the festival.

I had a chat with Archie this week about his Youtube Series, and the Port Fairy stage.

Hi Archie, how are you

We’re here to talk about “Archies Kitchen Table Yarns” – you’re a man of the times, doing a Youtube series!

Well, that’s it, we can’t tour, so we need to keep up with new technology and do things other ways.

It’s a 12 part series. You did the first one with Allara Briggs Pattison you must have been happy with how that turned out?

Yeah – it was good, really good. She played bass with us for a little while, so I already knew her. It was easy to relax and get into the conversation.

For me, one of the reasons it worked so well was that she was as keen to find out information from you, as you were from her. And then we as the listener get the benefit of the wisdom from you both.

Thanks, yes. I think it’s important that they know that they can ask me anything as well.

The next one on your agenda is Rulla Mansell and Marlon Motlop  – the song they’ve put out recently, “Black Swan” is something else.

We were in Adelaide for Womadelaide, and just after we had some breakfast they sang it acoustically, and when you hear it like that, bang, it’s just amazing. I thought it was incredible with the rap and singing, Marlon’s voice was just so good. It blew me away actually. I thought it was really really good. I’ve heard a lot of rap before with singing in it, but this was just so special.

Yes, I thought the combination of acoustic guitar and rap was something a little bit different. I liked that they name-checked you, the clip is up on YouTube actually.

Is it? – ah good! it was a pleasant surprise from the boys.

Then the following conversation is with Lydia Fairhall

Yep – she’s a great songwriter. So it will be good to have a yarn with her as well.

There’s such an abundance of first nations artists coming through aren’t there?

Yes – it’s great to see. Especially since when I began, there was Uncle Jimmy Little, Yothu Yindi and that was about it at the time. The young fellas that are getting up today are stepping up.

Briggs, Kian, Baker Boy, Allara, there’s so many. They are doing great music. Some of them don’t necessarily have an agenda. They are just creating great songs, with a great sound. Emma Donovan – she is amazing – I love her voice singing.

That’s big! We are still working through that. It’s exciting to have the foundation stage. It will be music, dance, conversation. We will be bringing in people to share the culture. We could even do basket weaving!

You must be looking forward to touring again

We are. We missed out and postponed so many shows. Hopefully, when we get the green light we can pick up where we left off.

I’ve read your book, and it was profoundly moving. You mentioned the feedback you get about how you singing your songs and your stories resonated with a lot of other people who had similar experiences to yourself. Does this still form part of the motivation?

Yes it does. It’s also the relationship I have with the audience that listens to me sing and tell yarns from the stage. It’s a real give and take. This gives me as much as I give them. Or sometimes more. It’s a great relationship I have as well with people who come to watch us sing.

It’s a pretty humbling experience when people come up to tell you that the songs have helped them.

Thanks for your time Archie. Is there anything else you want to shout out about your Table Yarns?

Hopefully, we give these up and coming First Nation singer/ songwriters a platform, so that more people know who they are.

When I first started, people didn’t know who the heck I was, so if I can give them a stage then it’s a worthwhile thing.

I’m sure they appreciate your generosity as we do. Thanks for your time and I look forward to seeing the rest of the series.

The following episode features Lydia Fairhall, to be released at 5pm AEST on September 1. Thereafter for the following nine months, a new episode will drop on the first Wednesday of the month at 5pm AEST. Do subscribe!