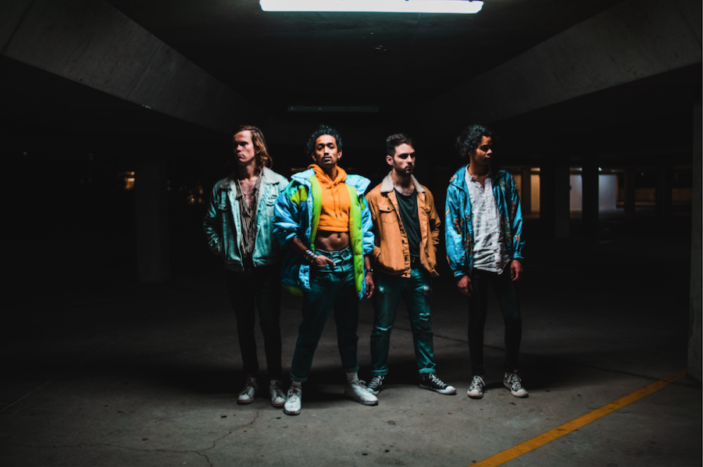 Adelaide four-piece Openfire have recently returned with their first track of 2020. Following the release of last year’s debut Reverie, “Wonderland” marks a confident, bold new progression to their sound.

The track is both lush and funky, driven by reverb-soaked guitars and thumping basslines. Frontman Luka Sandeo’s vocals soar, as he sings of pursuing dreams and taking risks.

Written and recorded in Openfire’s home studio, new single “Wonderland” demonstrates a musical cohesion forged by each member, and is a reflection of the band’s family-like ethos.

We were thrilled to have a chat with Openfire to find out more about the new single and we can expect from the group in the near future.

It’s been a challenging year for all. How did you keep sane/entertained in lockdown?

You’re definitely right there, the year has been fraught with hardship for everyone. But, the moment things fell apart we had a meeting and made sure that we were there for each other as family. We talked about everything and then kept our sense of structure.

We even tried our hand at downloading a game that we could all play together if we just needed bonding time to make it through. I guess our communication lines are always open and we tend to blow up each other’s phone at every opportunity so we’re lucky in that sense that we were never left feeling alone or bored haha.

Your new single “Wonderland” is about pursuing your dreams regardless of the risks. Is the song a reference to your band’s ambition to achieve success or is there a different – perhaps more personal – meaning to the lyrics?

I suppose it’s a natural combination of both. This song sparked itself just after each of us had decided that this family was to be ours forever, through thick and thin. Considering we had actually each come to uni out of some sort of grief to find stability and a future we could control, it made leaving for the sake of music all the more terrifying. I (Luka) had to be talked down from many breakdowns by the boys because of it actually. I can be a little dramatic.

What makes it so personal is the way that we held onto the words of this song so tightly after its completion (which was actually two months before lockdowns). Believing this was going to be our year, with one of our proudest works to date, a complete revamp on our image and sound, but being let down. Those words “hold on, keep running and your day will come” really etched themselves into our hearts, and it’s why I absolutely bleed those words for other artists that have been fighting to keep their dream alive.

You recorded this one in your home studio. Can you tell us a little about how the song came together?

It’s funny, Harry got a new guitar pedal, plucked away at a few chords just mucking around (which ended up being the first few chords you hear in the song) and my ears pricked up! At first the song looked as if it was going to go in a very slow ballad-like direction but I could hear a real heartbeat in the song.

It took many weeks of convincing and twisting of arms but the boys trusted the demo and all it took was them pouring their souls into the song and it just came together! Because each of us produces to some degree and we compromise really well, a lot of our songs tend to come together in a couple of days at most!

As a band, you’re all very close. You’ve even said “Before we are Openfire, we are family”. How did you forge such a strong connection as a group?

I think it comes from intention. We will always go into a venture (including our decision to become a band) with a check-in and vision. First we’ll make sure everyone is on the same page and that we’re all eager to go forward, if not we talk and we compromise till it works.

Then we turn that next step into a really vivid concept and vision that we all are willing to go relentlessly for. We started the band with the belief we will play Glastonbury one day, and that we’ll take Harry to Barcelona for a gig, those are non-negotiables.

Lastly, if things get tiring or stressful we all put our hands up and we check out as a band for a week; we go run around on a playground, we get ice cream, we laugh (I cry) and we nap. Then the week after we hit the ground running again.

You released your debut album Reverie last year. In what ways do you think the band has developed following its release?

Reverie will always represent our heart as a band. With certainty the album very gently explores our sound and allowed us to express ourselves individually because we limited ourselves to creating our song within our capacity to recreate it live.

This next era, we scrapped that and decided to send it. We are less bashful about the force we carry and and more willing to take risks that seem to be paying off.

I can confidently say that we went from songwriters to craftsmen in this new era, it’s less about writing a “nice song” and more about “what do we want to say?” and “where do we want to take them?”

Is this new single “Wonderland” the first taste of a follow up album?

Things are coming. Let’s just say “Wonderland” came together in a couple of days and we never stopped working during this year. Right here in this moment our preparation has allowed us to focus on “Wonderland”, so that’s where our heart is right now… But things are coming.

I would love to see a music video for this awesome track! If you could create your dream music video, what would it involve?

Funny you should mention! With everything that was going on we actually wanted to create a bit of a mood board or something to make “Wonderland” really come to life for all of you. But, without taking from the fact that we believe the song and the pivot as a band stands on it’s own! We did want to hammer home on the visuals though so we thought we’d vibe out on a lyric video that’s on its way soon! Keep your eyes peeled!

Once live music returns, can we expect a tour for the new single? Or what else is in store for the Openfire in the next few months?

We have absolutely been itching to take this song and our new sound on the road! The thing is it’s a big sound and we want to really make it a SHOW. So the next couple of months while we’re grinding away on our projects it is going to look like us piecing together a set that’ll hopefully get some tears going.

This year is slowly coming to an end. What would be your parting words to 2020?

I’d honestly absolutely love to ghost 2020, but if I did have to say anything, I’d say:

Thank you for showing us that we are all out here trying so hard to be seen, loved, and remembered.

Thank you for trying to unite us with our planet and our neighbour.

Thank you for showing all of us that this doesn’t last; and that at any moment it could all be taken away so we should be sprinting towards our dreams however big or small..

So like a stubborn child would say “You suck, but I know why it had to happen”