In Memoriam – Chrissy Amphlett: Only You 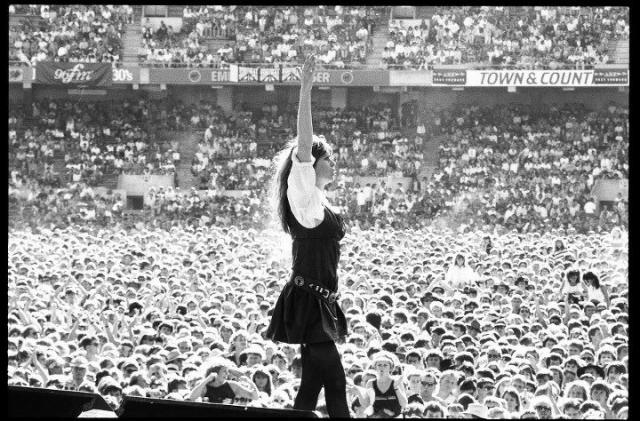 When the world loses a legend, everybody rushes to define what exactly it was that made them so extraordinary. For Chrissy Amplett, the most common descriptions will be these: singer, actress, icon; sufferer of drug and alcohol abuse, of breast cancer, of multiple sclerosis. But many people will wonder who she was, and those who have followed her band, Divinyls, or her acting career, know that this is unacceptable. Chrissy would demand a proper acknowledgement of her legacy — and what’s more, she deserves it.

Early life and the formation of Divinyls

Christine Joy Amphlett was born 25th October, 1959, and grew up in Geelong, Victoria. An energetic child, she had lessons in classical ballet, drama, swimming, modelling, and, of course, singing. She left home as a teenager to travel the world. Upon her return to Australia, she sang with various bands until she met Mark McEntee in a Surry Hills pub. The two formed an instant connection, inspired by their passion for music. Chrissy was 21, Mark was 28, and together with Jeremy Paul on bass, Richard Harvey on drums, and Bjarne Ohlin on keys, they formed Divinyls. The band was spotted by Mark Opitz — a producer who had previously worked with AC/DC and Cold Chisel — and he signed them to Warner Music Australia.

Shortly after, director Ken Cameron attended a Divinyls show. His current project was the film adaptation of Helen Garner’s novel Monkey Grip, and he was so impressed that he decided to feature the band — and Chrissy in particular — in the film. Chrissy would play a part very similar to herself: a rock singer with attitude. The rest of Divinyls were cast as Angela’s band, and their music would make up the soundtrack to the movie — a set up that gave them and their music greatly needed exposure. The film was released in 1981, with the band’s Monkey Grip EP following soon after.

The band released their first single, “Boys In Town”, in 1982. It scorched its way up the Australian music charts, reaching number 8. To boost her confidence and create a stage image, Chrissy adopted her now-iconic schoolgirl uniform, which would later inspire the fashion of musicians like Courtney Love. The band were off, chasing their rising star on tour, first nationally, and then internationally.

Their first record was released in 1983, titled Desperate, which included remastered songs from the Monkey Grip EP, as well as several new tracks. They released their second album in 1985 (What A Life!), and their third in 1988 (Temperamental), and all three were reasonably successful in Australia. But even with their heavy touring, they were unable to crack the international market until the release of diVINYLS in 1991. The first single, “I Touch Myself” went to number 1 in Australia and number three in America. It has become a classic that continues to be covered today, by everyone from P!nk, to Megan Washington, to Weird Al Yankovic.

Underworld, released in 1996, was the band’s final record. Despite the success of their previous album, it failed in America. Chrissy’s dependency on drugs and alcohol had become damaging to her performance, and the band were unable to escape the debt that had haunted their career from the beginning. Divinyls disbanded, but Chrissy’s career wasn’t over yet.

The Boy From Oz

Before Divinyls, Chrissy had performed in two musicals: Let My People Come, and Jesus Christ Superstar, in which she was the understudy for Mary Magdalene. But it wasn’t until 1998 that she took on her most celebrated role.
The Boy From Oz premiered to rave reviews. Chrissy’s performance as Judy Garland earned critical acclaim, and she was finally able to begin paying back the mountain of debt against her name. She married Charley Drayton in 1999, and they lived together in New York.

But life had always been hard on Chrissy. In 2006, she was diagnosed with multiple sclerosis. The woman who had long been known for throwing herself around on stage was now struggling to walk. Yet she had committed to reprising her role as Judy Garland in a new production of The Boy From Oz just the year before, and Chrissy was never one to give up. Strengthened by a combination of exercise, physiotherapy, anti-depressants, sleeping pills, and other medications, Chrissy performed in all 42 shows, Australia-wide.

In 2010, it was revealed that Chrissy had been diagnosed with breast cancer, but due to her pre-existing multiple sclerosis, she wasn’t able to undergo chemotherapy. Despite having a double mastectomy in 2010, Chrissy succumbed to the disease on April 21st 2013. She was just 53.

Chrissy Amphlett will not be forgotten. Her musical contribution was recognised in 2007, when Divinyls were inducted into the Australian Rock’n’Roll Hall of Fame, but her impact on the industry spreads far wider. As the first woman to ever front a headlining Australian band, the space she carved out for herself in the music industry has opened the way for the countless other female performers who came after her. Chrissy’s talent, attitude, and undeniable individuality make her one of the most accomplished performers to ever front a band in Australia — if not the world.

My primary source for this article has been the 2007 updated edition of Chrissy’s autobiography, titled Pleasure And Pain: My Life. I highly recommend it.