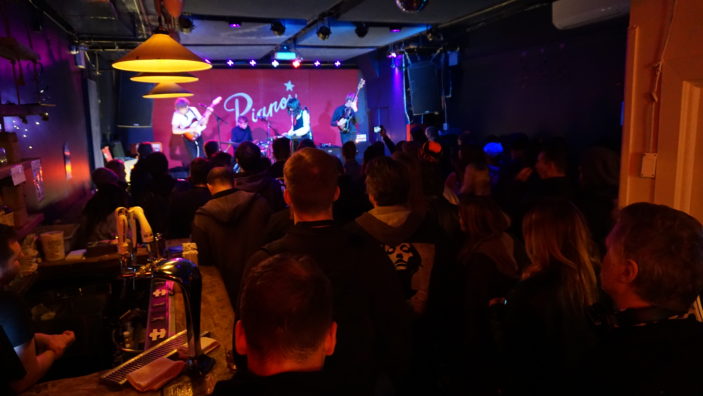 I write this sitting in self-isolation in Toronto, Canada – as countries around the world are closing borders, scrambling to “flatten the curve” as the reality of the spread of Coronavirus sinks in. I, like too many, had been rather blasé about the whole thing – I mean I was sanitizing surfaces, washing my hands religiously and keeping my distance from people. But the idea that we were all going to be shutting borders down at this point in time seemed like a highly unlikely scenario this time last week. A time that now feels like a distant memory.

So that’s why I, and a cross section of the music community flew to New York City last Wednesday to attend the second annual The New Colossus Festival – an event whose organisers pushed through against all odds, delivering a beautifully curated event of emerging artists across a small amount of low capacity venues in the Lower East Side and East Village.

Being in the city during this time was a surreal experience to say the least. While the worry was clear from the time we landed – after all, this event was happening in spite of the SXSW cancellation – Wednesday night felt like an event like any other. We went out to dinner, armed with all the necessary sanitary equipment, and went out to shows. Practiced alternatives to handshakes. And had a great time. Many $5 beers were enjoyed.

Here’s some of the acts I caught during the festival’s opening night, including what turned out to be Aussie group Shady Nasty‘s first ever performance in the USA, which sounded fantastic at Lola’s in the East Village – where we would hold our own party on the Friday night.

The next afternoon, as the panels were held on Thursday at Piano’s, news was coming in fast. It’s fair to say that in those few hours, everything changed.

Within hours of making the announcement, Broadway went dark for the first time since 9/11. And it will stay that way for at least a month. All venues over 500 capacity had to close on the Friday, and if you were under that mark, you had to halve your capacity. This wouldn’t shut down the event we were at, bar for the Place To Bury Strangers show, but there were certainly rumblings that the event would pull the plug just to be safe.

Other rumours, that ended up being nothing more, were circulating that the city was going to be put into shut down over the weekend. It was clear we were living in a very different reality than 24 hours earlier. We could get stuck here – or even worse, we could all be adding to the problem. In the end, a lot of us changed flights, many went home early, and most acts started having to cancel the rest of their US tour dates. But for those of us who were staying on ground for at least the next day or two, the attitude was simple: We’re here, so let’s just make the most of it before we rush off home. And that’s what we did.

But first, we drank.

By the time Thursday night hit, I managed to find the energy to get out of bed and do what anyone in New York will do when they don’t have the courage to do anything else: I went to the bar. I saw nothing at the festival. I drank a lot of tequila with one of the acts playing at our party the next night, as I watched the Australian dollar fall in real time (we’re down below 60c at the time I write this), and tried to get my head around this new reality we were in.

I was anxious about our show the next night. Should we cancel it? Should we go on? Would anyone even show up if we did? Safety was of course an issue, and I know the organisers were thinking the same thing, but really I just wondered if we all had it in us. There was a lot to process.

I was quickly taken back though to my experience in NYC during Hurricane Sandy. It was eerily similar.

While no one was physically boarding up windows, they were metaphorically. Streets that were normally packed were deserted, and venues that would normally have lines down the street were virtually empty. This was all a good thing – it meant that people were taking social distancing seriously, as they should. But in the same breath, the festival started feeling like the last chance to celebrate our industry before the lights were turned off indefinitely. And for so many of us in the industry, that’s not an opportunity we can turn down. So Friday night came, and the AU review had its party in New York City.

In the next, 4 bands performed (we had 6 scheduled), and changes were being made by the minute. I need to take a moment here to thank Lio Kanine, who books the festival, for being such a champion in making sure the bands who still wanted to perform were able to – while being totally understandable if anyone needed to split. A huge shout out as well to the bands who played: last minute addition Hussy out of the UK, Aussie acts Jaguar Jonze and Wolfjay – for whom this ended up being their unplanned final American shows – and local act Safer, who many may remember from his days in The Rapture (and you really, really should check out his new stuff). They all delivered killer shows in what is my new favourite venue in New York City.

Thanks too to Charlie Ashcroft of Amazing Radio in the UK for DJing, and to the whole team at Lola who were absolutely wonderful to work with under what were trying circumstances for everyone. In the end, I would say we had about 40 – 50 people through the doors throughout the night, and saw a room of people who were looking after one and other in the way New Yorkers do best. Just with a lot less hugging, and a good amount of social distance.

It was a unique chance to capture a moment in time that hopefully will never be repeated. And I know for the bands that played both our showcase, and the overall festival, it will be an experience they never forget.

The night was quite the way to end my time running gigs for the AU review to say the least. But somehow it feels appropriate. We’ve always survived against the odds. And here is an event that did the same. In the end, The New Colossus symbolised everything that New York stands for. A place that will push on no matter what and be there for one and other. For so many of these bands, this will be their last live shows in a long time. This is a devastating pill for our industry to swallow, and one that people behind the scenes are frantically working out how to address. Suffice it to say, there was no unified pandemic response in place for this industry, or many others.

This means this will also be the last bit of live coverage we have on the AU review for some time, which is the heart of this site. So I also wanted to take this opportunity to thank everyone who has supported the AU review over the last 12 years, and hope you’ll continue to do so. The site will continue to produce content through this period, and the amazing team here will do their best to support music in every way we can.

Normally we as an industry push through no matter what – this past weekend being no exception – but now it’s clear we have to pause. These steps are necessary, and when we come out on the other side we’ll be ready to come out swinging. But until then, look after one and other, and particularly check in on any friends in the live industries. This is going to be a rough time, with no clear end in sight. I want to send my best to everyone in the industry who are struggling at this time, and all those being directly impacted by the virus itself.

We’ll all get through it together. And in the meantime, we’ll have these memories to hold on to. The New Colossus was an important reminder of just what we’re losing in all this. That the magic of the live stage is not something we can ever truly replicate.

May it live forever.

If you’re in Australia and have something to spare, consider donating to Support Act, who will be able to get it to those in the arts who need it most, amidst the closure of the live music industry.

While we were at The New Colossus we stayed at The Moxy NYC Chelsea. All photos by Larry Heath.