Duo Hockey Dad have found a novel way of launching a new album. They will be launching their new LP Brain Candy at the Bulli Showground in Wollongong, on the 31st July. The album will be played in full, including  “I Missed Out”, “Itch” and “In This State”.

The night will be similar in style to an old style drive-in movie-theatre, where everyone needs to stay in their cars. Audio will be supplemented via an FM radio broadcast. Tickets are sold by the car, and will be limited to 400 cars. So, it’s important to get in early. Ticketing information is below.

In a statement from the band this morning:
“It’s super exciting to be able to play a show again. The drive-in aspect will make it such a new experience for everybody. The fact we can bring back live music in this way is so cool. It’s a mixture of old school entertainment crossed with a weird futuristic apocalypse vibe.”

Supporting Hockey Dad will be local Wollongong rockers, The Pinheads.

On the big screen will be shown the epic surf doco, “Rage 3”. It’s bound to be an epic night out, and one to bust the iso-blues. 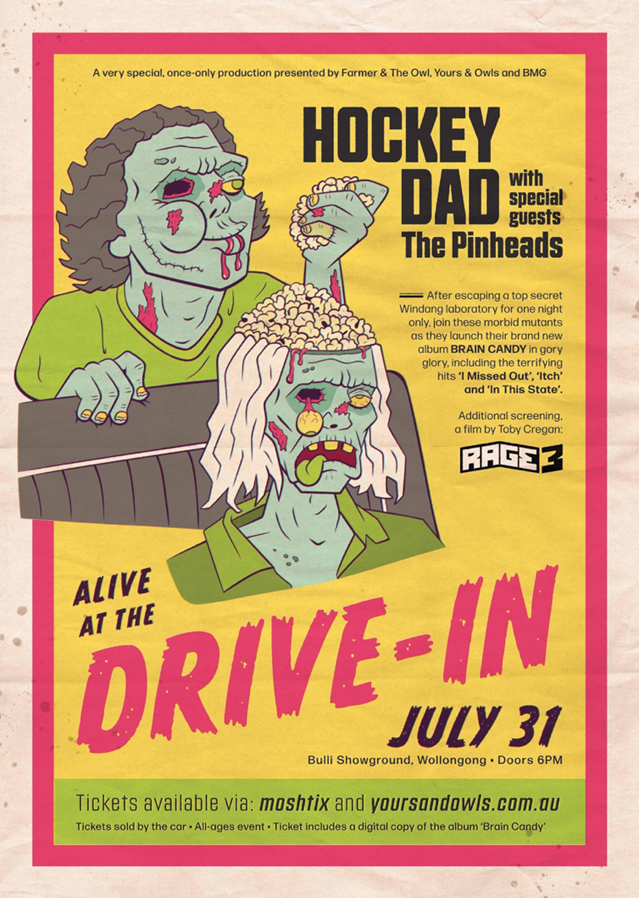 Tickets go on sale at 9am on Thursday the 28th May  HERE. Each ticket includes a goodie-bag of Hockey Dad memorabilia and a limited edition “Alive At The Drive-In” poster.