2020 has dealt Sydney up-and-comers PLANET something of a rough hand. Thanks to COVID-19 their tours of Australia and the UK in support of their new EP Maybe Someday were cancelled.  And although they managed to sell out some intimate shows at Mary’s Underground in August, the Sydney quartet are determined to finish the year in style, with two shows at The Factory Theatre on Saturday, December 19th. Joining them on the night with be special guests, Salarymen. Here’s what guitarist Tom Peppitt, had to say about the forthcoming shows:

“We recently played four seated shows at Mary’s Underground over two nights and they all sold out really quickly. Such a good vibe for those nights and we had the opportunity to strip back all of our songs a bit for the intimate setting. I think we got a taste for playing live again so we wanted to put on the biggest, best show possible to close out the year. Can’t wait to bring this show to everyone. Restrictions are easing, gonna be a good one!” 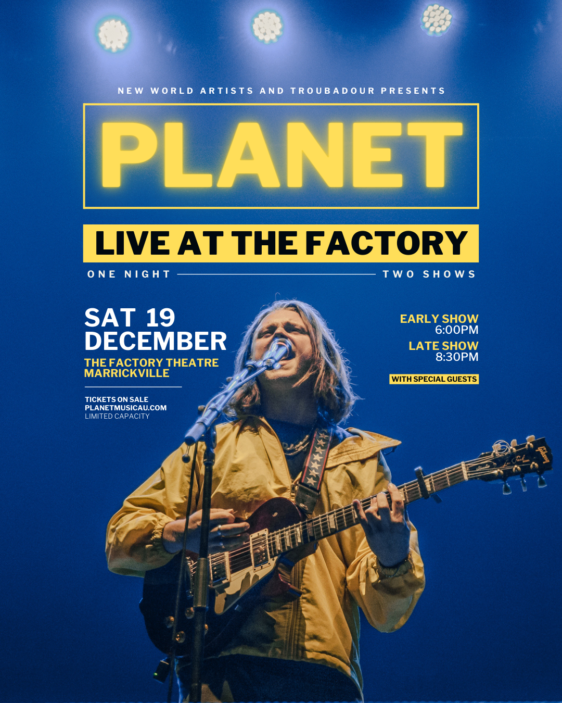 To celebrate the announcement of these shows, the band have put together a playlist for us, with a selection of their favourite pre-show tunes. With selections coming in from each of the four members, there’s some interesting choices made, with at least one bandmate preferring a more chilled pre-show than the others.

Press play on playlist, read on, and get yourself hyped for spending December 19th with PLANET.

Classic Oz rock song, with a strong driving rhythm and big guitar strums. “Don’t change the Earth, Don’t change a thing” – to me, before a show, it’s a call to live in that moment.

A song everyone in the band loves by the incredible Bad//Dreems. We listened to this song plenty in my dad’s Holden on our early tours and it has Australiana embedded in it’s DNA. Brings back some great memories.

The Jesus and Mary Chain “Head On”

Just listen to those drums. Straight into it. How can not get hyped up by this?

Another instant hitter. There’s something about the urgency of the guitars and the movement created by the patchwork of sounds in this one. Relentless.

The Angels “Take A Long Line”

This one’s been a constant in our pre-show playlist. ‘This is it folks, over the top!’

These songs are both super laid back, because I like to relax hard before a show. Joni Mitchell‘s voice is obviously incredible and this song is one of her greatest. Primal Scream‘s, “Star” is a nice sluggy jam and is super fun, and easy to listen to because of the production. They, along with a jam-packed playlist, send me straight to chill-zone.

U2 “Bullet The Blue Sky”

One word. Huge. Love the drums straight in on this track. It’s got a real gangster slow-mo walk feel to it. Perfect for the green room to stage walk.

If coffee and a cold shower hasn’t woken you up yet, then this song surely will. I really dig the industrial guitar lines blended with those massive synths. Would love to blast it out the PA before playing a show but never had the time!

Tickets on sale and available HERE