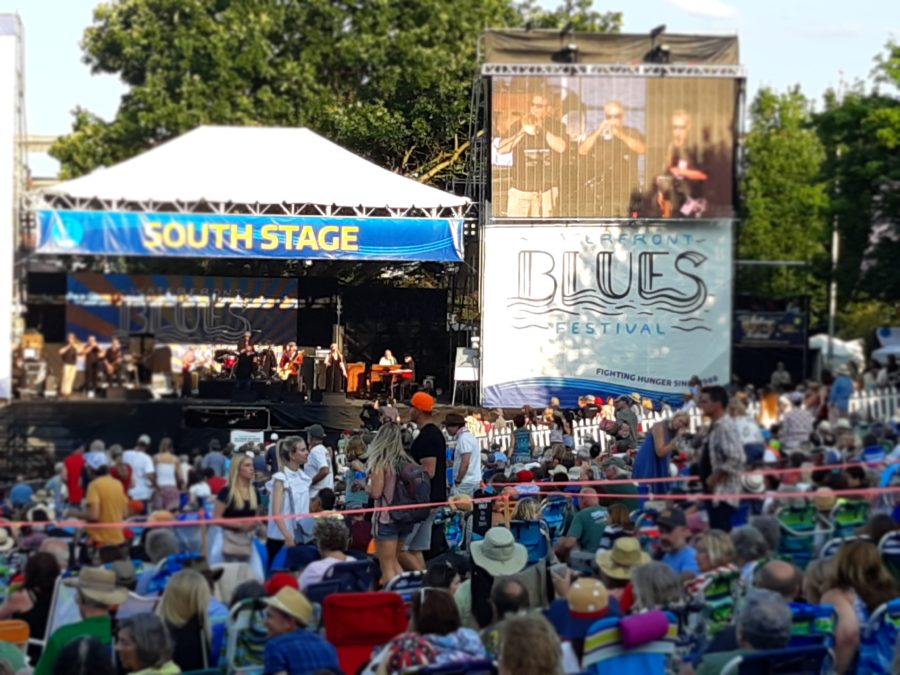 The Waterfront Blues Festival, now in its 33rd year, was held from July 4th to the 7th in Portland, Oregon. The venue was Tom McCall Park, a narrow green strip on the western edge of the Willamette River in the city centre. With four stages and dozens of performers, this is the largest festival of blues, soul and funk music in the western United States. It’s both a magnet for international acts and a gathering of local musicians with a strong hometown feeling.

After days of cloud and rain, the sun shone brightly on 4 July. Waiting in line for admission, I enjoyed the array of drummers, strummers, preachers and rappers vying for attention outside the event boundary. Once inside, I walked the length of the park to scope out the festival layout.

First came the Front Porch Stage, then the smaller Crossroads Stage, closely followed by the Blues Stage. At the far end was the South Stage, the venue for the best-known bands where the biggest audiences were expected. In between were a host of food stalls offering Asian, African and American meals and snacks, and plenty of market sellers displaying the usual mix of handcrafts and cheap clothing. The atmosphere was mellow and, despite the crowds, relaxed.

Talk about spoilt for choice! Over the next few hours I was mesmerized by the traditional blues sounds of Anthony ‘Big A’ Sherrod, the soul sax and vocals of Vanessa Collier, and the soaring slide guitar of Roy Rogers and the Delta Rhythm Kings. Drifting from stage to stage, I felt immersed in a medley of blues-soul-funk sounds. ‘Water is Life – and so are the Blues’ read the banner on the fence at the river’s edge. At a festival of this calibre, you can’t help but agree.

An unexpected highlight was the dancing. On a dedicated dance floor overlooked by the Front Porch Stage, contests, demonstrations and lessons in jazz and swing dance took place between 4pm and 8pm. Supported by musicians on the adjacent stage, seasoned professionals, brave soloists and curious newcomers turned this section of the park into a humming hive of swinging, jiving energy and grace.

It was a pleasure to watch The Rose City Sweets, an all-women historic dance troupe, twirl and slide their way through the often whimsical routines that used to light up dancehalls in the 1940s and 50s. Just as enjoyable was the sight of enthusiastic amateurs of all ages doing their thing in the freeform sessions. I watched a small red-headed boy indefatigably keeping up with the adults around him, a lone male dancer lost in his own moves, and couples both young and old stepping out in style.

Legendary vocalist Curtis Salgado has been a stalwart of this festival since its inception. I was keen to see and hear Salgado, who has been the winner of multiple Blues Foundation Awards and is well known for his longtime collaborations with Santana and his influence on John Belushi’s development of The Blues Brothers. Making my way towards the South Stage, I heard Salgado’s soulful, raspy voice long before I saw him – and I saw him in close-up on one of several giant screens well before I picked him out on the stage itself. This is a drawback of the South Stage performances: the audiences are so large that, although the sound is immediate, for many in the crowd the visual dimension of the experience is mediated by screens.

I loved Salgado’s set, especially his self-penned survivor’s anthem ‘Walk a Mile in My Blues’. But I did feel distanced from the action and a bit lost in the crowd, and was glad to return afterwards to the small-scale intimacy of the Front Porch Stage. I’m glad I did, because I was able to get a seat close to the stage for one of the Festival’s most joyful events, the Harmonica Blow-Off backed by Kim Field and the Perfect Gentlemen and opened by none other than Mr Jim Belushi.

‘May the blues set you free!’ Belushi shouted after his fun rendition of ‘Sweet Home Chicago’. Freedom certainly reigned on the dance floor as singles and couples took to the floor to express their enthusiasm for the talented harmonica players who followed. My favourite was Grant Dermody, a West Coast native who now works out of Louisiana, where he’s digging deep into the roots of harmonica blues. His set was accomplished, sure-toned and utterly captivating.

The big-name act of the night was the Robert Cray Band, which had the last slot on the South Stage. This may sound sacrilegious, but having paid my respects to an undoubted master I returned to the lesser-known harmonica players. Sometimes small is best, and for my money the Front Porch Stage with its local acts and personal touch was the place to be at this festival.

Portland Waterfront Blues Festival took place from the 4th to the 7th July 2019. Head HERE for more details about the event.

The writer was a guest of Travel Portland.