Fresh off of Eurovision Decides, Jaguar Jonze is added to our New York City party at The New Colossus

On Friday, 13th March, the AU review is throwing a party in New York City as part of The New Colossus Festival. And we’re thrilled to announce that we just added another Australian act to our lineup. Set to join Tia Gostelow and Wolfjay, is Brisbane based artist Jaguar Jonze, fresh from competing for a spot on Eurovision as part of Eurovision: Australia Decides, which screened on SBS earlier this month.

During that performance she performed her latest single “Rabbit Hole”, taking from her upcoming EP, which you can view by clicking the image below.

Signed in the US to Nettwerk Records, Jaguar Jonze is the musical brainchild of Deena Lynch, who also has a photography project under the name Dusky Jonze and has been acclaimed for her narrative illustrations as Spectator Jonze.

We’re thrilled that New York will get to experience this incredible artist in action for the first time next month, ahead of her debut performance at SXSW in Austin, Texas.

As for the rest of our lineup, Jaguar Jonze is taking the place of VISTAS, the UK act previously announced who sadly can no longer make the show. Alongside the three Aussies, we also have Singapore act The Pinholes, DC punk trio Knife Wife and local star SAFER, who will perform at Lola from 5.30pm on Friday 13th March, alongside DJ sets from BBC Radio’s Shell Zenner.

For more about our event on Friday 13th March at Lola, head HERE. Standalone tickets for this event are $10 and you can grab them HERE. 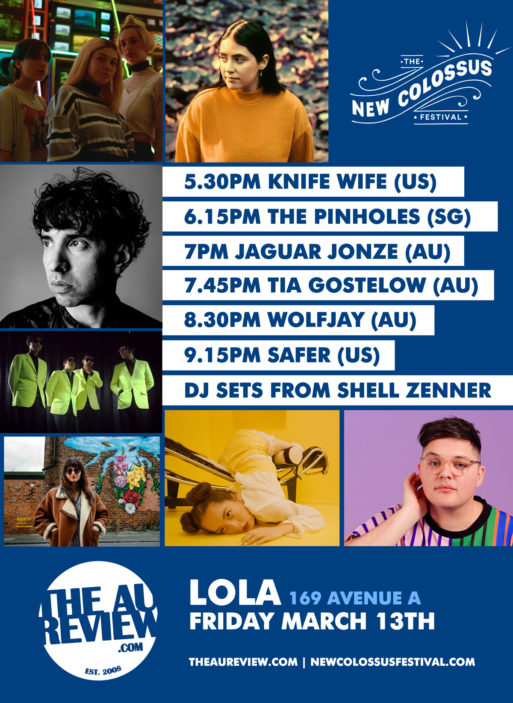 The New Colossus Festival’s 2nd edition takes place on the Lower East Side of Manhattan from March 11-15, 2020. For more details about the event, and to grab a badge for $100 – which gives you access to all showcases (including ours!), happy hour mixers panels and more – head to their official website HERE.