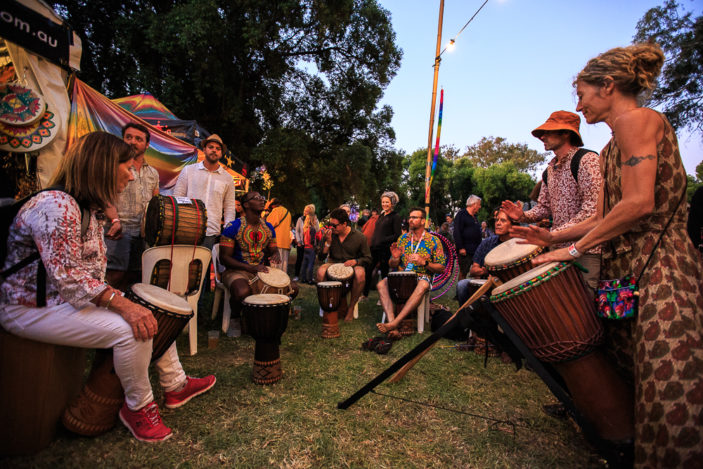 Every year, Adelaide is home to WOMADelaide, one of the world’s most eclectic, unique and diverse cultural festivals that combines music, dance, cooking demonstrations, workshops, talks and much more. The massive four-day event meanders throughout the trees and clearings of Adelaide’s beautiful Botanic Park, with seven stages and over sixty-five acts from across the globe.

Proceedings kicked off with a Kaurna Welcome To Country as the first festival-goers arrived and settled in. The first act of the weekend was the stirring gospel vocalists, the Blind Boys of Alabama. The group fed off the applause, and bandleader Jimmy Carter kept gesturing for Adelaide to make more noise, stating “Hope you are ready for some old gospel music, because that’s just what you’re gonna get!” Carter then laughed, before the group launched into a rendition of “Walk into Jerusalem just like John,” offering up an impressive set that also included classics such as “People get ready” and “Spirit in the sky”.

Australia’s great 2019 Eurovision hope, Kate Miller-Heidke brought her unique vocal stylings to the eager Adelaide audience, kicking off her set with the beautiful “Glorious”. On stage, Miller-Heidke is engaging and funny, and so is her songwriting. “You’ve underestimated Me Dude” is the perfect example of her brilliance. She tells us she wrote the awesomely audacious number in celebration of International Women’s Day.

Folk icon, singer-songwriter Laura Marling has toured before playing smaller venues such as The Gov; yet, she still seemed at home on the huge WOMADelaide stage. Walking on stage, she picked up her guitar and instantly begins a fifteen-minute medley that morphed from “Take the Night Off” to “I Was an Eagle”, “You Know” and finally “Breathe”. It is only after she finishes this song that she seems to breathe and takes a moment to say hello to the crowd. She rolled along with a selection of both older and newer numbers, lulling the Adelaide fans into a gentle calm as they sipped their WOMADelaide gin and waited for the sun to go down.

One of the most energetic acts of the weekend was Havana’s 12-piece outfit Orquesta Akokán, who took over the Foundation Stage with loads of drama, noir-James Bond vibes mixed with energetic Cuban mamba. Lead singer José ‘Pepito’ Gómez had everyone dancing along. Likewise, the extensive Public Opinion Afro Orchestra brought their energetic and fierce blend of genres and sounds to a crowd ready to dance and celebrate. The Public Opinion Afro Orchestra is amazing to watch and a pleasure to hear.

In contrast to the big-band, big-stage performances, there were some unique and unmissable performances that remind you what WOMADelaide is all about, such as classical Indian violinist,  L Subramaniam. Performing on Stage 7, tucked away amongst the tall pine trees, Subramaniam led his accompanists through the Indian Rāgas, with the mellow, relaxing tonnes reverberating through the warm afternoon air.

A fast favourite with the WOMADelaide crowd was New York’s all-female mariachi band, Flor de Toloache. The band is a revelation and a celebration that is so upbeat and catchy that they had everyone smiling, clapping and cheering along. Flor de Toloache tell us they wanted to bring the woman’s perspective to the genre of mariachi. They also experiment, mixing genres such as Motown and covering punk-pop classics like No Doubt’s “Don’t Speak” in Spanish, and delivering an amazing Nirvana medley.

A big crowd gathered at the Foundation stage for a fiery performance from Chicago octogenarian rhythm and blues icon, Mavis Staples. She promised us “inspiration and positive vibrations” and she definitely delivered a good helping of both, with amazing renditions of her classics such as “Stronger,” “Who Told You That” and “Build a Bridge” mixed with stories from her amazing life.

Marina Satti and Fonés, from Greece was a wonderful surprise find for me on the smaller stage 3. Satti is the charismatic bandleader, who blends Greek and Middle-Eastern sounds and dance, with the Fonés – four female, harmonising, polyphonic vocalists who support her vocally and with some fantastic dance moves. Satti was full of cheeky energy, and seems perfectly at ease on the stage performing a set full of infectious melodies, sometimes up-beat and sometimes moving, but always entrancing to watch.

It is not only musical acts that captivate at WOMADelaide, and it was something special to watch the Floating Flowers performance by Taiwanese B.Dance. Evocative of lanterns floating on a river, the dancers combined an assortment of contrasting and complementary choreography that was beautiful, whimsical and powerful.

As the sun went down the performers in As The World Tipped went up! Their spectacular aerial performance telling the frustrating story of politics and bureaucracy around climate change from the Copenhagen Climate Change Conference and the (literal) tipping point, performed as breathtaking aerial theatre. This year, environmentalism and climate change were a major focus of the festival, which has always done it’s absolute best to be a zero-waste event.

WOMADelaide is not only a gathering of international artists but also a celebration of Australia’s best and brightest. One of the biggest Aussie acts included Briggs, who played his only set at 10:45pm on Sunday night accompanied by a full band which included Lindsay McDougall of Frenzal Rhomb and DJ Jayteehazard, plus guest performances from rapper Savage and singer Ngaiire. Briggs is a great frontman whose humour and charisma seems effortless. He had the crowd singing along to “Rather Be Dead” and playfully “tested” the DJ with a call and answer that led into a performance of “Sheplife.”

The whole weekend was full to the brim with amazing talent and exciting musical guests, so much so that there was not nearly enough time to see even half of the acts on the lineup. Newcastle’s Matt Corby closed out the Foundation stage on Monday night, essentially wrapping up the whole weekend. He was a late addition to the line-up, filling the spot left by Ziggy Marley who sadly had to pull out of the event, and he was a tremendous replacement. WOMADelaide 2020 showed us once again what a perfect music festival should be like: diverse, sustainable and thriving with a vibrant atmosphere and positive energy.