Festival Review: Under the Southern Stars hits Brisbane for big send off 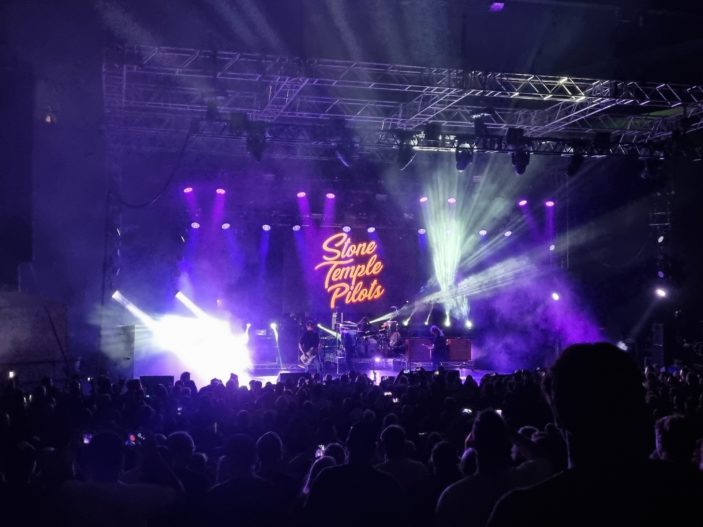 Huge touring festival Under the Southern Stars brought its stellar lineup to the Brisbane Riverstage on Sunday 27 March for the final show of a 12-date run. Headlined by legends Stone Temple Pilots, Bush and Cheap Trick, this celebration of 90s rock was the first international tour of Australia in two years. An afternoon of day drinking, festival food and live music has been long overdue in this part of town and it certainly went out with a bang.

A scattered crowd of around 500 people, predominantly in their 40s, stood patiently at the barrier and sat on the hillside in small groups. There was a lot of Connies and Doc Martens with shirts boasting Nirvana, The Offspring, Smashing Pumpkins, Oasis and the like. Food trucks lined the top of the hill with pizza, Greek and the forbidden Dagwood Dog on offer, while the bar line rarely shrunk soon after the gates opened. The MC for the event, David ‘Davo’ Holleran of Rebel FM, engaged the audience with his liberal language and charming charisma between sets.

First up, Melbourne five-piece Electric Mary lived up to their name for such a performance. Delivering an injection of ‘rock and roll, swagger and soul’, the band played fervently and brought the energy early into the day. Shared powerful vocals, intricate guitar solos and huge drums had punters getting up as others filed in to get a glimpse. Frontman Rusty Brown even brought an urn with his father’s ashes out to see them play before a banging extended instrumental closed the set. MC Davo emerged to announce that they will *hopefully* be touring again later in the year, then had the crowd chanting ‘Angry’ to warm them up for Rose Tattoo.

The iconic Sydney rockers took to the stage in loud shirts with glittery guitars as frontman Angry Anderson acknowledged the ‘intimate’ crowd and addressed them as his ‘brothers and sisters’. Anderson’s signature gravelly vocals soared over the band’s slide guitar riffs and four-to-the-floor beats even in their 60s and 70s. After deeming the start of the set ‘foreplay’, things picked up and a decent gathering – from bikers to grandmothers – formed up the front to groove along. The band slowed down classic hit ‘We Can’t Be Beaten’ to introduce each member before launching back into the big final chorus. Davo soon returned to ask if fans would rather ScoMo or Angry for prime minister and you can probably guess the verdict.

By the time Black Rebel Motorcycle Club were on, seated punters on the hill started to fill out and the crowd at the front doubled. The Californian blues-rock trio wore all black, with enigmatic guitarist Peter Hayes in a balaclava, as an eerie intro of picked melodies and rumbling drums set the mood. Deep smooth vocals, a variety of effects pedals, a harmonica and wholesome tambourine made them the most diverse band of the day. Each song garnered big cheers despite their nonchalant gratitude, saying “We would like to thank whoever played before and whoever is going to play next”. Call-and-response harmonies and jerky movements made them entertaining to watch as they saved the best for last, finishing with upbeat jam ‘Whatever Happened to My Rock n Roll’.

Old mate Davo commended the impressive sound from just three musicians and told the guys in the front to move aside so the ladies could see Bush frontman Gavin Rossdale in the flesh. After apparent technical difficulties delayed the set, thudding kicks and rhythmic red lighting ushered the English grunge giants to the stage – Rossdale donning a Jim Morrison shirt. The band kicked off with the stomping title track of their latest album The Kingdom before moving into old classic ‘Machinehead’, which quickly had the crowd jumping and singing. A backdrop of mysterious visuals and engaging performances from the band captivated, with busy drums and Rossdale leaning over the barrier to shake the hands of eager fans in the front.

The huge set comprised exclusively of material from their debut and latest album, a whopping 16 years apart, except for popular single ‘The Chemicals Between Us’. Rossdale frequently complimented the crowd and gave a mention to the technical crew and Tom Waits before slowing down ‘Everything Zen’ to address the global pandemic and war in Ukraine. After John Wick theme ‘Bullet Holes’, a solo Rossdale stood in the spotlight with a guitar for fan-favourite ‘Glycerine’, letting the crowd sing the second verse acapella. The band ended with moody singalong ‘Comedown’, extending the bridge and turning the mic around to face the crowd for the final chorus and arguably the best performance of the night.

Next up, rock veterans Cheap Trick – who replaced LIVE on the original bill – stepped out to a warm welcome in bizarre attire. Dressed in a navy outfit with glittery pants, a sleuth getup and a pornstar costume (possibly unironically), the band brought classic rock and roll with a punk attitude. Frontman Robin Zander paraded around with the mic stand while guitarist Rick Nielson sported a yellow and red flame guitar, frequently walking sidestage and returning to throw fistfuls of picks to the crowd. Zander’s son and touring guitarist of the same name took the mic for a song and bassist Tom Petersson performed an unusual solo before also singing lead vocals, leaving fans a little restless and wanting more of a show.

After a first half bereft of hits, the set livened up as (frontman) Zander returned to the mic for timeless classic ‘The Flame’ with an incredible range. Stone Temple Pilots frontman Jeff Gutt came out for ‘I Want You to Want Me’ and did a pretty good job as Zander watched on. They resumed with hits like ‘Dream Police’ and ‘Surrender’ (Guitar Hero II, anyone?) and impressed for a group still going strong in their 70s. The members lined up at the front and bowed to a roaring applause before wishing the crowd goodnight and saluting them farewell. Davo popped up again shortly afterwards and told everyone to go to the bathroom then get ready for ‘the best rhythm section of the night’.

Everyone on the hill was standing when a picked mandolin signalled the beginning of the awaited Californian grunge quartet Stone Temple Pilots. Gutt strutted to the front of the stage in a black leather jacket and sunglasses as the band plunged into ‘Wicked Garden’. Fervent bass and beefy riffs bolstered the soaring vocals with a hint of late Scott Weiland’s signature style. Heavy hit ‘Down’ saw Gutt mount the barrier and shake hands with people in the front for much of the song, then an ambient guitar and bass noodle eventually led to fan-favourite ‘Big Empty’ as fans swayed to the slow jam.

Gutt took a moment to declare that it was his first time in Australia before the band launched into the classic hit ‘Plush’. Fans roared as that instantly identifiable progression rang out and the newest singer proved his abilities with a dynamic vocal performance. The rain that was forecast had held off for most of the night until the song finished and it started coming down heavily for ‘Trippin’ on a Hole in a Paper Heart’, which was welcomed. Punters belted out the catchy chorus and a couple of songs later came big finale ‘Sex Type Thing’. The band played like a well-oiled machine and were mesmerising in both their musical talent and stage presence, sending the whole tour off in true STP style.

The return of international tours to Australia is something to be excited about and Under the Southern Stars was a huge first step for bands, industry workers and fans alike. Though the turnout could have been better given the calibre of the headlining artists, they were by no means underwhelming and the overall event was a success. Everyone poured out of the venue with big grins on their faces and merch in their hands, repeating how getting drenched on a Sunday night was totally worth it. It brought happiness and nostalgia back to a city that used to thrive off live music – and this is just the beginning.