Review: Groovin’ the Moo transforms Canberra into a festival-goers’ dream 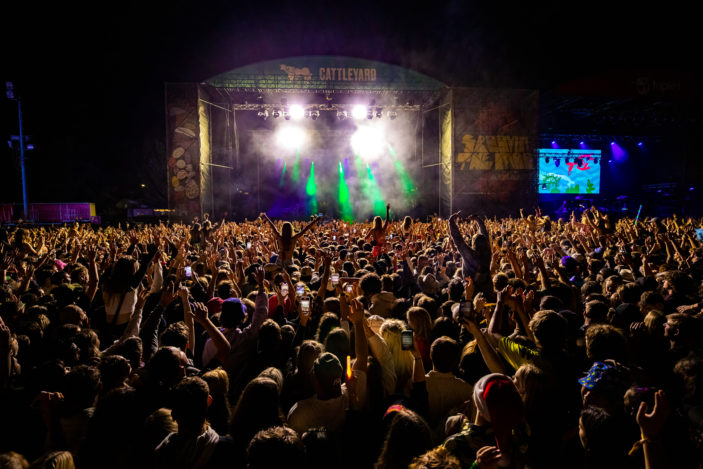 We love long weekends – particularly when they give us an opportunity to dance, eat well and sing along to Lime Cordiale’s ‘Inappropriate Behaviour’. Groovin’ the Moo (GTM) did just that in Canberra!

This year, Groovin’ the Moo was held at the EPIC Showgrounds, a place we usually find graced by farmer’s markets, exhibitions and book fairs. But on the 24th of April, EPIC was transformed into a festival-goers’ dream, with everything from Grease Monkey’s burger stand to a groovy milk-bar to a drop-tower.

But the real question is: how was the festival? Let’s get into it. 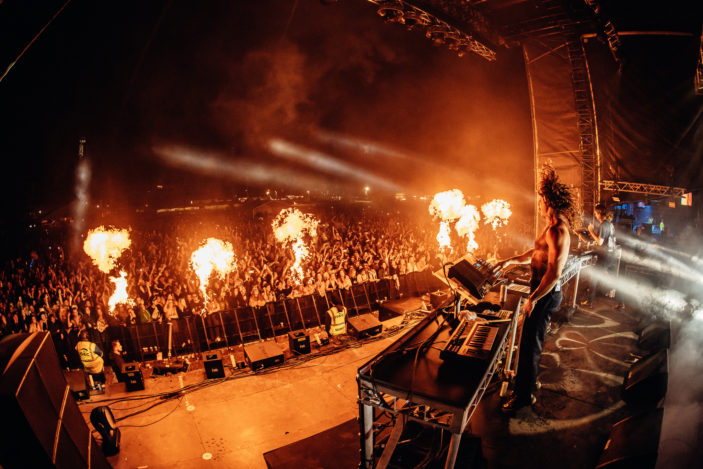 Groovin’ the Moo hit the nail on the head with another spectacular line-up, with great acts ranging from first-time festival players to long-time festival heroes. Here are some of the acts that really stood out to us:

Aodhan, also known as Aidan Whitehall, is a seventeen year old songwriter who came all the way from Wollongong to deliver his very first festival performance. His set-list includes his 2019 single “Butterflies”, which has over one million streams, and other songs from his debut EP Flies in the Room, including “Twelve Again” and “I’m Closed”. His cover of “Three Leaf Clover” was especially well-received by fans, who’d attended the festival at 11am to catch his performance. It was a tender, emotive show, connecting with current and future fans alike. Welcome to the festival scene Aodhan, and best of luck with your upcoming tour!

Hope D has come a long way since her debut single “Swim” in late 2019. Since then, she has taken home the inaugural QMusic Emerging Artist Award, and the prestigious Carol Lloyd Award, an award aiming to support emerging non-binary singer-songwriters. She’s played sold-out headline tours, and at all our favourite festivals, including BIGSOUND, Splendour In The Grass, Laneway Festival, King Street Crawl, and now, Groovin’!

She delivered an inviting, rockin’ performance, wowing her fans with several unreleased songs, alongside “Addict” and “Happy Hangover”. The highlight of her show was her cover of Britney Spear’s “Toxic”, which had fans cheering. With each song, her vocals amazed. A strong and emotive performance, fans still missed “Second”, one of her 2020 releases. Maybe next time.

Polaris, Australian metalcore icons, delivered a set including a mix of older and new tunes from both debut album The Mortal Coil, and 2020 release The Death of Me. The band delivered a crushing performance which had the crowd moving and moshing, as well as engaging in a wall of death, giving the heavy music fans a chance to rock out and enjoy something more aggressive from the indie-centric line-up. Highlights included their cover of “Black Fingernails, Red Wine”, as well as fan-favourite “Masochist”, which had the crowd engaged in a dusty and energetic circle-pit.

Spiderbait, one of Australia’s premier alternative rock groups, delivered a high-energy and electric set off the back of their new release Sounds in the Key of J, a compilation of every song that bass guitarist and vocalist Janey English sings lead on. English was a delight on stage, singing led on popular tunes “Calypso” and “F****n Awesome”.

The band was tremendously engaged with the fans, with sing-a-longs and chants galore led by Mark “Kram” Maher, the bands lead vocalist and drummer. The band blasted through their hits, with songs like “Buy Me a Pony”, “Old Man Sam”, and their infamous cover of “Black Betty”, which certainly had the crowd groovin’ and movin’. 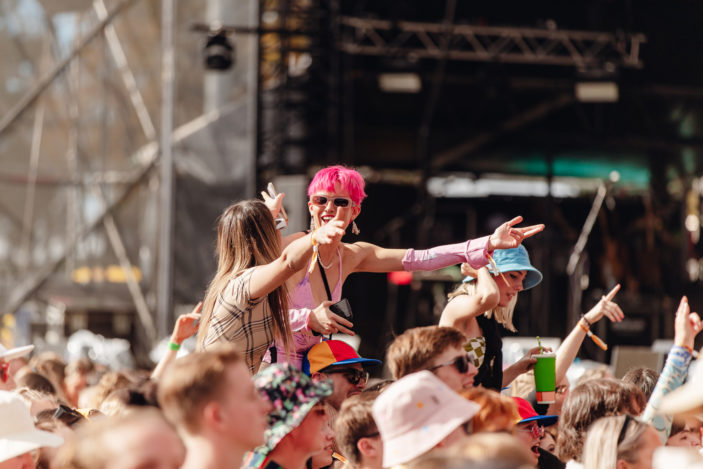 Georgia and Caleb Nott, the siblings behind the incredible futuristic pop sensation BROODS have blessed our ears since the 30th of January 2014, when they released their self-titled debut EP Broods. Since then, they have released four more albums, and toured with Taylor Swift, Ellie Goulding, Haim and Tove Lo. They’ve come a long way since their humble beginnings in Auckland!

Living up to the hype, their Groovin’ performance was incredible. They played all their top singles, including “Bridges”, “I Keep”, “Free” and “Peach”. Alongside powerful and soulful vocals, Georgia and Caleb were bathed in blue and red as part of an amazing light show, which also swept over the crowd. The cherry on top was Georgia’s dancing, which captivated the audience.

Lovingly considered one of Australia’s favourite bands, Lime Cordiale has earned a reputation of providing infectious and passionate performances. With multiple awards under their belt, including the 2021 ARIA Award for Best Live Act and 2020 ARIA Award for Best Breakthrough Artist, as well as a recently released album, there was a lot to forward to, andt hey absolutely delivered.

Let’s start with the outfits: all four members were dressed in spectacular 70’s inspired suits, with bright colours and open necked shirts with long collars. This uplifted their performance, adding spice to fan favourite songs, with the set list including hit singles from Permanent Vacation, their 2017 studio album, and 2020’s 14 Steps to a Better You.

“Money”, “Inappropriate Behaviour”, “Robbery”, and of course, “Temper, Temper”, got the crowd moving and singing. What they say is true – Lime has a special way of getting fans engaged, whether that be through directly joking around with them or making one special request: “Okay everyone, for this last song, let’s get all the girls up on shoulders!” Fans were more than happy to oblige, and the crowd became several feet taller. 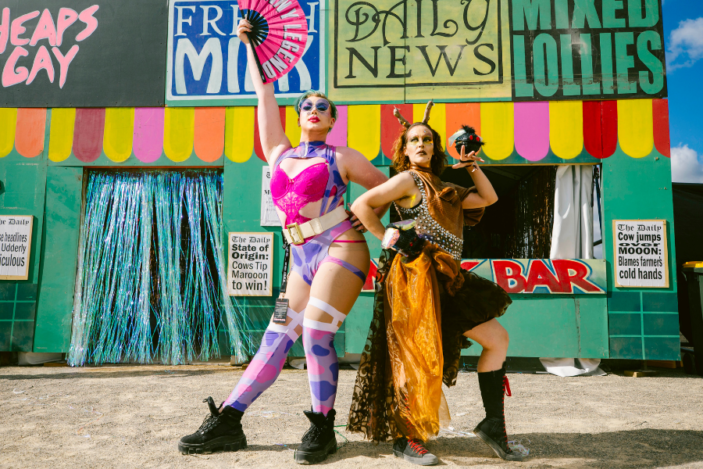 EPIC Showgrounds provides a lot of wiggle room, and Groovin’ took advantage of that. The festival was big. It would take you around ten minutes to get from one end to another, so best believe everyone was getting their steps in for the day.

There were three main stages, with Moulin Rouge being held in an undercover area to the right of the festival, and TripleJ and Cattleyard being held to the left. Between them was a plethora of food and drink options, as well as the drop tower, and milk-bar turned mini-club. There was a stall offering hygienic refreshments, in the form of deodorant, sunscreen and hand sanitiser – a great initiative on GTM’s part! It was kept busy, with festival-goers highly appreciating the free refreshments. With the sun out all day, I was a frequenter of the sunscreen station myself.

As it was an all-ages festival, there was a barrier keeping the under-18s separate from the bar. This gave over-18s a separate space to party it up, if they wished. The bar section housed several great food options, including burgers, wraps and pizza, which the under-18s wouldn’t have access to. This was a shame, as vegan and vegetarian options were limited, and the best options were those in the over-18 section. I wouldn’t want to miss out on Grease Monkey’s mushroom burger!

Worth mentioning was the Cocktail Bar, which was hidden away in an area to the top-left of the festival. It was quaint and quiet, a place to escape to for a relaxing drink.

Something else of note was the Udder Mayhem area – a VIP area to the top of the festival. In the morning, it was a delight, offering shaded places to sit down, drink and unwind. As the festival continued, however, the delight faded. As the VIP section had completely sold out, there weren’t enough seats for everyone, causing many folk to simply sit on the floor.

While it was decorated beautifully, and had great food and drink options, we hope that next year there will be space for everyone to sit comfortably! 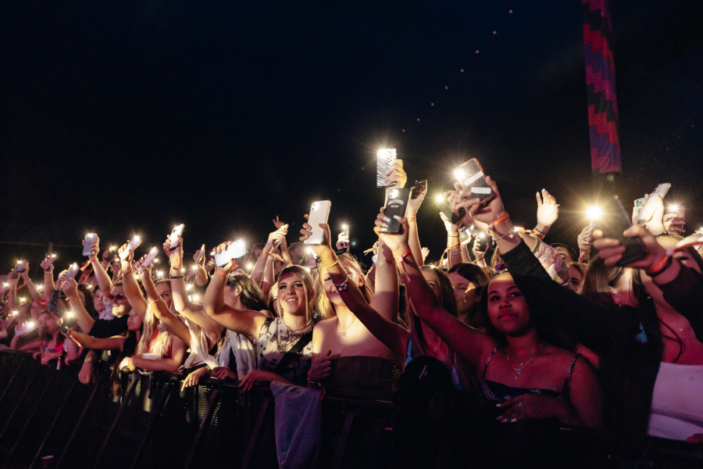 We love a good boogie, especially on a beautiful, sunny day, and Groovin’ the Moo definitely delivered that. They put together an impressive line-up, and chose an excellent location. Festival-goers were looked after with an array of food and drink stalls, and refreshments stalls that helped them stay clean and sun-safe.