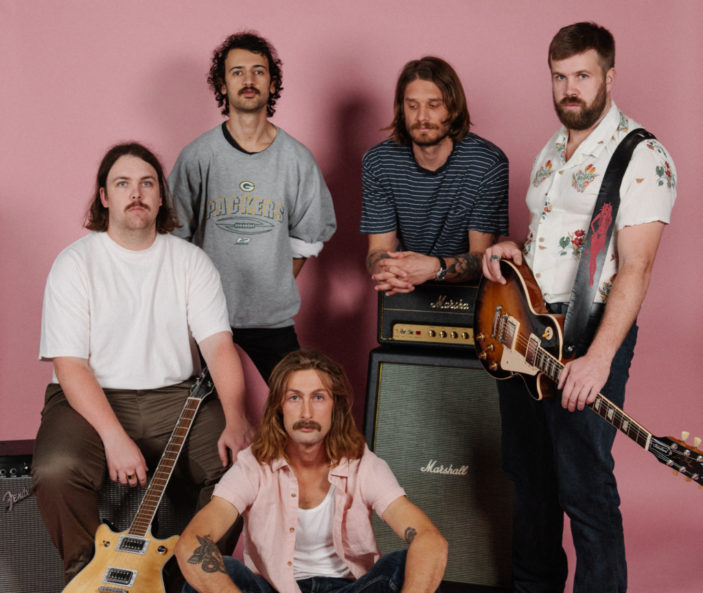 ‘Cool’ is the first word that comes to mind when you bear witness to WA alt-rock five-piece King Brown. Suave and grit meet in their latest single “My Love”, released 6 May, with driving guitars and smooth melodies creating that familiar dive-bar sound. Influenced by the likes of The Black Keys, Verge Collection and The Strokes, the band also offered each of their dream collaborations to give an insight into their musical direction.

“Thematically, ‘My Love’ is a song about being completely lovesick towards someone,” King Brown explains. “Feelings that are so intense that you’d do anything for them, but in the back of your mind, being very insecure and jealous of anyone else because you’re afraid of losing them.”

This double-meaning may come as a surprise, given the confident swagger of the track, yet it’s a very relatable concept that plagues the best of us. Nevertheless, the badass grooves and hypnotic vocals make it impossible to keep still while the jam does its thing. The catchy single – the first since their 2021 EP Out in the Desert – marks a new era for the band, most notably a switch in members.

“We’ve completely changed the dynamic within the band. With Brendon (vocals/percussion) stepping up from behind the drums to be the fulltime frontman, it’s enhanced our live shows phenomenally. We’ve turned a new page and we’re so excited to see where we can take it.”

“Production-wise we changed things up a little. This is the first song almost completely recorded and released by ourselves. We recorded half of the song at Vision Studios and the rest at Ben’s Bumchic Studios. Vision Studios allowed us to capture that large room sound for the drums and guitars. With Ben mixing this track too, and Shaun creating the artwork, we’re pretty much a fully inhouse band.”

On the subject of taking things into their own hands, each member shared their dream collaboration with us.

Ben (bass) – “Would be pretty cool to collaborate with Gary Clark Jr., Julia Jacklin or Margaret Glaspy. All lords and leaders in their own right.”

Ash (lead guitar) – “Slash: I have been greatly inspired by Slash in my guitar playing and his timings, feel and melodies are so expressive and downright awesome.”

Brendon (vocals/percussion) – “There is so much good music coming out of Western Australia at the moment that it’s hard to overlook. Just playing or being a part of shows, drinking and having fun with everyone every time makes me think how much fun it’ll be collaborating with musicians in our own backyard.”

Jake (drums) – “I mean, who wouldn’t want to work with the god that is Rick Rubin? The guy has quite literally done everything. Big bucket list item.”

Shaun (rhythm guitar) – “I agree with Brendon, I think it would be pretty sick to collab and get inside the mind of the all mighty Humble Armada.”

Absolutely adored by local music incubator triple j (and for good reason), King Brown are moving into exciting territory with their latest effort and entirely realistic goals. Grab some abnormally large sunnies, crack open a cold one and crank the volume, because the WA boys are supplying the rock ‘n’ roll and good times for days.

You can follow the band on their socials below.