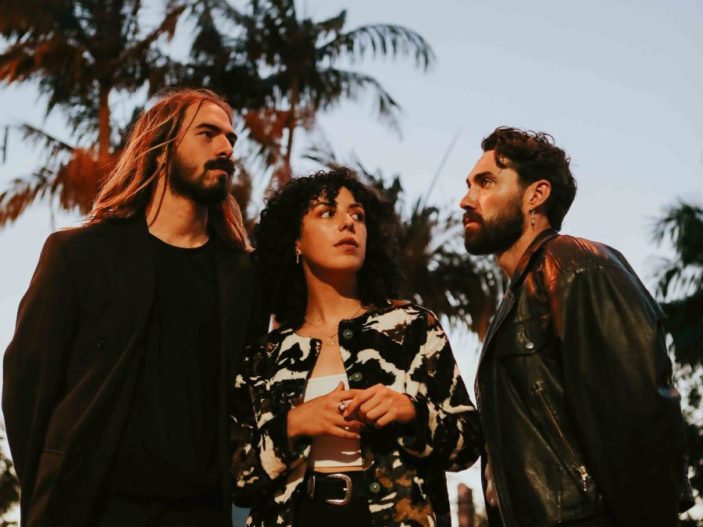 HOLiDAY are an outrageously talented indie-pop trio currently based in Tasmania. Comprising Meg Hitchcock on vocals, Jesse Higgs on vocals and guitar, and Marcos Micozzi also on guitar and synths, they are blessed with two singers with incredible voices. “Next Best Friend” is their debut release, and we are thrilled today to be premiering the live video of them performing the track.

The vocals Jesse are emotive and beautifully balanced by the strength, calmness and range of Megs. Sweet guitars and dramatic synths with a driving percussion give the track oodles of mood and just the right amounts of light and shade.

“Next Best Friend” was originally written and recorded in a shed in Tintenbar in NSW four years ago. Over the next three years, there were lineup changes, and it was overtaken by other songs, but eventually, the band entered the Old Dog Studios in the Byron Bay hinterland to finish the song off, adding the live drum tracks and some final vocals. It was engineered by a long-time pal and engineer, Al Pegg. The final mix was undertaken by Holy Holy’s Oscar Dawson. It’s fair to say it has taken many steps to get to where it is today.

The band recently took part in Party in the Apocalypse and the Great Escape and were extremely well received.

About the video, the band writes: ‘Next Best Friend’ LIVE at Bisque is one of the live takes from a series that we did via the stunning Bangalow property. We set up and performed a total of 7 tracks that were Directed by our small team, comprising of Director and mentor Simon P. Lock, award-winning DOP Nolan Verheij and other talents behind the lens; Lukas Pawlaczek & Jess Foote. With the sun spending most of its time behind the clouds that afternoon, it pierces through at a key moment in the song via some pretty speccy ‘Jesus Rays’ for a special cinematic finish.