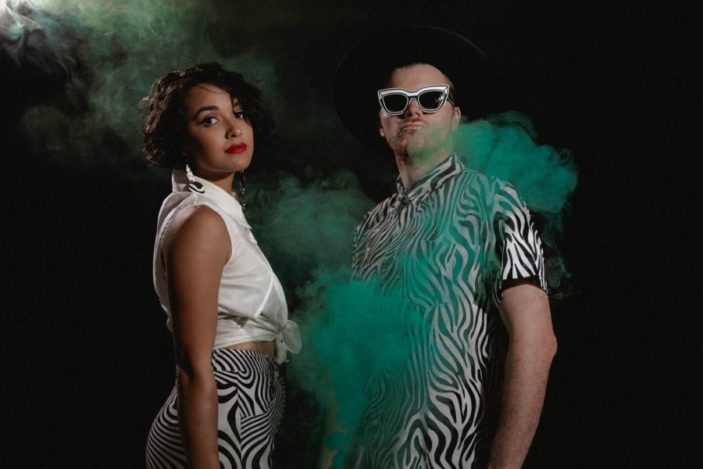 Last year electro-indie/pop duo GENIIE BOY released their debut EP, If You Have Something To Say, and they are back with new music, in the form of the futuristic “Elevator to the Sky”. We are thrilled to be premiering the track, and its zany video ahead of its release on Friday.

“Elevator Sky” is another gem from the creative powerhouse that is GENIIE BOY. The duo, Alisha Todd and Scott French, have a gift for creating rich and buoyant soundscapes. Todd’s vocals intertwined seamlessly with French’s guitar grooves, fuzzy synths and steadfast rhythm have them glide into their make-believe space world. It’s a song to dance to, and a track to be transported to a fun happy place.

Apparently the song was inspired by a podcast that discussed the idea that an elevator to the sky would be the means to interstellar travel as a way forward for human evolution. If so, I hope it’s as fun as portrayed in the clip. We have  Futuristic Space People (FSP’s), glowing drinks, light shows, sunglasses and way more.

The video is fun and imaginative. It has a fun DIY feel to it, and no doubt the extras are a bunch of their mates. About the video, the band says “Like all GENIIE BOY things, this video is very DIY. We made the Futuristic Space People costumes (lots of paper mache, putty and trips to Spotlight), directed, filmed part of and edited the clip. We advocate DIY!”

Check out the future, and the fabulous “Elevator to the Sky” from GENIIE BOY.