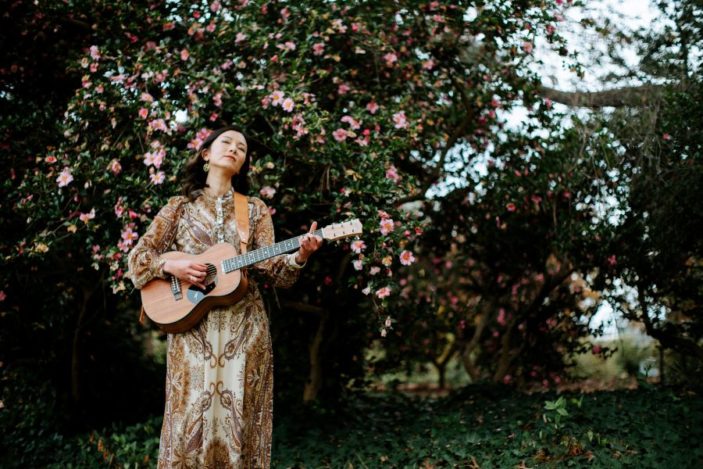 Indie folk artist Kim Yang, released her debut EP, Ocean of Mind in 2019 and has been cementing her place in the folk world ever since. She has graced the stage with the likes of Tori Forsyth, Ben Lee and Josh Pyke, and performed at the National Folk Festival (2019 and Good Folk (2020).

In 2020, Kim started to work on a new EP, with the help of a grant from ArtsACT, and has teased out the first two singles, “Garden of Eden” and “Dominoes”. We are thrilled today to be premiering the finished EP, Brave, prior to its release on Friday, 10th September.

Kim’s songs have an entrancing delicacy to them, as she gently sings her stories with clarity and with a light touch.  Her vocals are pure,  telling her tales vividly, reminding me of some of those great Irish folk singers that have gone before. “Garden of Eden” packs an emotional punch as she sings of being stuck in Eden during the bushfires of 2019.

To support the release of the EP, Kim will be performing with a full band at The Street in Canberra on Friday 17th December. Ticket links below.

Kim has written us a track-by-track description for the EP. So do press <play>, sit back, have a read,  and enjoy this entertaining and thoughtful record from Kim Yang.

I wrote this song after I had a bit of a meltdown. I went through a period where I just kept taking on new projects and saying yes to people. I was afraid to miss opportunities so I just kept saying yes. In the end I was stretched too thin, and I broke down. This song is a reminder that it is okay to say no. I wanted to remind people that it’s not possible to always please everyone, and it is important to prioritise looking after ourselves.

As an immigrant, an introvert, and a woman in the male-dominant world, I often feel I don’t fit into society. I wrote this song to encourage people to have faith in themselves, focus on their own journey, and navigate their own path to success. Everyone’s journey is different, with different paths and different destinations. There is not correct way to live your life. Some people play dominoes as a smart tactical game, but I choose to play it the fun way by lining up the tiles and watch them collapse.

Dominoes celebrates everyone who feels lost in this time of mass confusion. The song is an anthem for people who are full of self-doubt and uncertainty. It calls for people to embrace their struggles and enjoy the journey to their unique destinations.

After an exhausting 2019, I was looking forward to a well-earned holiday on the South Coast. But mother nature had other plans. I became one of the many people trapped in Eden on New Year’s Eve. “Garden of Eden” is about my experience of that night. The song is focused on the invisible damage caused by the bushfires. My words highlight the trauma and anxiety caused by the oppressive smoke and uncertainty. This experience was shared with hundreds of thousands of people from Mallacoota, to Canberra, to the Blue Mountains, and beyond.

This song was written as part of my healing process. I wanted to put my anxiety into words and let others who felt the same know they are not alone. The impact of the bushfires on the mental health of Australians was truly horrific. By sharing my story, I hope to highlight the importance of talking about trauma, supporting each other, and the impact of climate change on our world.

“Fantasy” is about me longing for my parent’s love during hardships. I left my family and moved from Taiwan to Australia in 2012. My family is a typical Taiwanese family that never really expressed love in a physical or verbal way. This was compounded when I travelled around the world, moved overseas, and again with COVID-19.

In the song, I sing ‘So I start to dance to keep your gaze on me, never want to let go of you’. This line is a statement that while my music career may seem to be flourishing, I still feel lonely and empty without the encouragement from my family. I long for the connection that I wish to have with my family, wish to mend that gap between me and them. The evocative lyrics and emotive vocals combine with bird song, sombre cello, and dreamy keys to create a vulnerable soundscape that yearns for attention from my listeners.